It’s ironic that just yesterday I wrote about how excited I was to play Cyberpunk 2077. Just today Cd Projekt Red announced that Cyberpunk 2077 would be undergoing another delay, despite the game going gold already. The announcement came earlier this morning on the Cyberpunk Twitter. That’s right guys. Once again, Cyberpunk 2077 delayed. 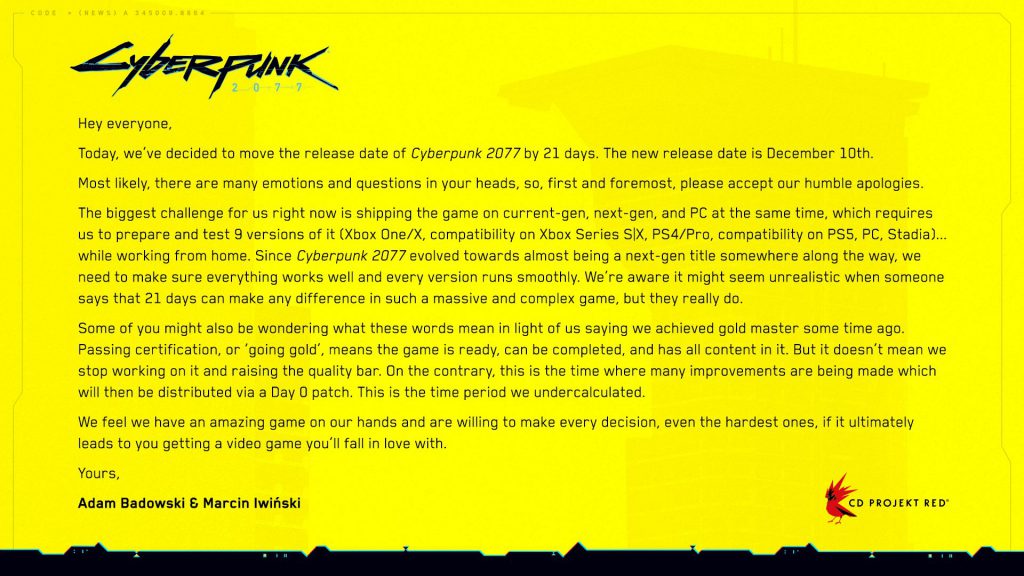 Although this is sure to frustrate some fans, CD Projekt Red believes it was the right decision. If it makes any of you feel any better the delay isn’t that long. Cyberpunk 2077 has only been delayed 21 days and will now release in December. I know some people are upset but I think it’s a blessing. With November already having so many big games, it’ll give gamers a chance to finish a few before jumping into the gigantic game that is Cyberpunk 2077. If the length is anything like The Witcher 3 we’re in for a long game.

The reason cited for the delay is due to working on too many versions of the game. I suppose I can kind of see this, after all the game is going to be cross generational. Working on nine different versions of the same game has to be rough. I just hope for their sake, after all these delays, that Cyberpunk 2077 has a smooth launch. Otherwise fans might riot.

Delaying was the right move though, I think. This game is supposed to be huge and if it doesn’t have a decent launch it could negatively impact the experience for a lot of players. I just hope CD Projekt Red puts these extra 21 days to good use. They claim themselves that it can make a huge difference.

This isn’t the first delay, or controversy Cyberpunk has been under. Recently they were chided for removing features from the game. They also went back on their promise that said they wouldn’t be doing any crunch to finish the game.