The CW has hosted another successful 3 night crossover event starring the DC Universe’s hottest heroes. This year, it was called Elseworlds, and brought about many great moments between The Flash, The Green Arrow, Supergirl, and Superman. It delivered 3 quality episodes with moments that surely had fans grinning, cheering, and shaking off goosebumps. Now, we know that the title of next year’s event which is shaping up to be Elseworlds times 3. The CW announced Crisis on Infinite Earths coming Fall of 2019.

The heroes are flip turned by The Monitor, and Oliver and Barry end up switching costumes and delivering a fun first episode.

In part 2 of the event, during the Arrow episode, the team meets Batwoman in Gotham City. They also meet The Monitor, who then congratulates them for passing the “test”. The test, they come to find, was stealing the book from Dr. John Deegan.

Part 3 has the heroes brush shoulders with death as they bravely try and set things right again. With the help of Superman and one single Arrow shot from Oliver, they are able to stop a determined A.M.A.Z.O. Although there were hints of the next title throughout, The CW confirmed the title at the end of part 3, after we see Psycho Pirate talking to Deegan in the jail cell.

The Elseworlds story almost had Supergirl and The Flash moving too fast for their own goods, and Superman wanrs them that he does see them dying. Their destinies are to die in those moments. They do it anyway, which prompts Oliver to say, “We need to hope destinies can be rewritten.” We need to transfer that hope over to next year, because Crisis on Infinite Earths brings the heroes even closer to death.

Here is the official Crisis synopsis from the book by Marv Wolfman and George Perez:

This is the story that changed the DC Universe forever. A mysterious being known as the Anti-Monitor has begun a crusade across time to bring about the end of all existence. As alternate earths are systematically destroyed, the Monitor quickly assembles a team of super-heroes from across time and space to battle his counterpart and stop the destruction. DC’s greatest heroes including Superman, Batman, Wonder Woman, Green Lantern, and Aquaman, assemble to stop the menace, but as they watch both the Flash and Supergirl die in battle, they begin to wonder if even all of the heroes in the world can stop this destructive force. 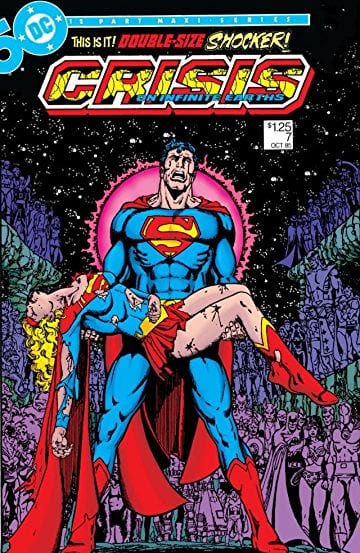 If they follow the story as they have with the past events, this means that Elseworlds was a huge test for what’s to come.

What did you think of Elseworlds? Are you already looking forward to next year’s event?

Arrow, Supergirl and The Flash will return to complete their normally scheduled seasons in January.