In a cyber meeting room (well in my head that is what I call it) we were discussing how a couple of us had teenage crushes on New Kids on the Block. That caused memories to come flooding back. They were the original boy band. They paved the road for N ‘Sync and Back Street Boys and they made my teenage heart melt. I grew up in a small town in Alabama so while everyone else was listening to country music I was ‘Hangin’ Tough’. Even now at nearly 41 years old, sporting more gray hair than I should, and recovering from a knee replacement if I hear the words “Oh, Oh, Oh, Oh, Oh” I reach for my belt buckle and prepare to dance. 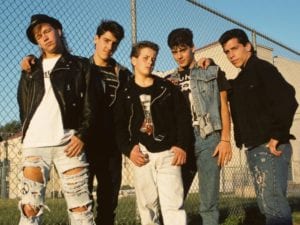 When I say I was a fan, dear reader I do not believe you can truly understand what I mean just by reading those words alone. If you walked into my bedroom, it was as if you fell into this twisted rabbit hole and landed in a wonderland of all things NKOTB. There was not a blank space on my wall that was not covered with a poster of one of the members or a group photo. Seriously, I truly believe the wall was actually supported by all the posters and tape. Then we get to the bed which was covered in sheets, pillows and comforter that was all New Kids on the Block. Keep in mind this was like 30 years ago when that was not even really a thing like it is today. I may or may not have made a deal with the devil to even have them in my possession. My teddy bears were all named after them and I dressed them in t-shirts with their correct picture on the correct teddy bear.

I could have easily been their “Stan” you know Eminem’s crazy stalker fan. I had all their tapes because I am OLD we didn’t even have CD’s at that time. I knew every song by heart and spent hours dancing very badly around my room like no one was watching but I am sure they were because I did spend a couple of weeks at this “retreat”. I spent all my money on teen magazines just to see what they were up to and doing. See that is how lucky teenagers have it today. All they have to do is log on to the computer or pick up their phone and they know everything and I do mean EVERYTHING their favorite celebrities are doing. Of course, again might have been a good thing I didn’t have that kind of power. Because with great power comes great responsibility. 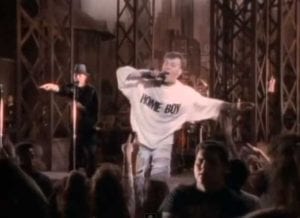 However, the highlight of my teenagehood (yes, I am aware that is not a word spell check but I like it) was when I got to attend one of the only two concerts I have ever attended in my life and it was the New Kids on the Block. I was in Heaven. They were horrible seats, we were in what my grandmother called ‘Peanut Heaven” because we were so high up we couldn’t see anything plus my fear of heights and my certainty I was going to fall and take every innocent fan below us with me had me terrified UNTIL those fireworks exploded and those 5 singing and dancing heartthrobs appeared, and my fear disappeared (not really but it makes the story sound better). The evening was made even better when we learned where their tour bus was going to be pulling out from. We raced out there and waited for hours and finally, their chariot came into view and standing in the front bus window waving was Donnie Wahlberg. Then leaning out the side windows touching fans hands as they pulled slowly away was Joey McIntyre and Jordon Knight. I reached as far as my chubby teenage arm could reach because even at 41 I stand 5’4 but luckily there was a sidewalk so as I reached up Joey reached down and as if there was a magical teen romance movie slo-mo scene our hands touched for a brief but romantic moment (HEY don’t judge me it was romantic in my head ok) and just like that the best moment of my teenage years was over. I walked away in a stunned state of shock. I had just touched one of my teenage crushes. I did not want to wash my hand ever. However, I was a realist I mean we had waited for awhile and I had to pee and well you have to wash your hands, but I did wait a little longer looking at that hand until the angry lady pounded on the door hurrying me up because she had to use the bathroom too. 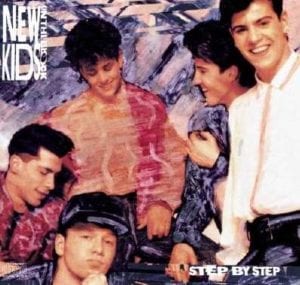 Life, however, goes on dear readers. We get older and things change. I met my husband at the age of 16 and married at 17 been together nearly 24 years. We have three children together and been through some stuff, but I can’t say that if one of the members walked up to me and said “Hey girl, you got the right stuff and if you can hang tough then I’ll be loving you forever”. I would turn to my husband and be like “uummmm so I am sorry but it’s New Kids on the Block and I was technically dating them in my head before I met you sooooooo ummmmm yeah”. I know it will be super awkward at first, but I think he will get over it “Step by Step”. Right?

So, there it is readers the confessions of my Xennial Teenage Soul (Ok I just googled that not even sure what a Xennial is or even how to pronounce it correctly just thought it made the story sound better, but it didn’t). There is no shame in my mid-life crisis game. I would still be sleeping on those NKOTB sheets except I have a king size bed now and I have no clue where they are anyway and I’m not willing to make any deals with any unsavory characters at my age to get new ones. I would still go to their concerts if they have them in my area (well maybe depends on ticket prices because I have gotten frugal in my older years) I would still stand on the sidewalk and wait for their bus to pull out (well for a few minutes anyway because my knees and back can’t take a lot of standing in one place) and I would reach out to touch their hands (but not to far because my shoulder surgery really affected my stretching ability plus I can’t be sure how many hands their hands have touched and it is flu season and getting the flu at my age is well frankly dangerous and my co-pay is ridiculous) but man I am still down to be their number one fan. Or 100th I am not really willing to fight anyone for a spot but I still love them.

James Corden & The Backstreet Boys are Bringing Boy Bands Back