Carnage appeared in Sony’s 2021 Venom sequel Venom: Let There Be Carnage, but early design art provides a glimpse of what things could have been taken to the next level. 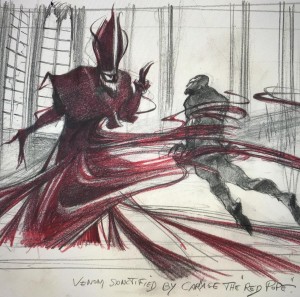 According to the lore description attached to the concept art, it originates from Carnage’s ultimate form, dubbed the “Uber form,” during development.

“Early in development Carnage was going to power up to truly massive proportions in what was dubbed “Uber form”, it also incorporated Carnage with wings, something that pops up in the comics a few times. The climax of the sequence would see Carnage atop the cathedral whilst it is entirely engulfed in flame. Ultimately this was dropped”

Furthermore, Burn added that the intention for the wings at first was to appear like those of a dragon, but they eventually evolved into representing Carnage’s extraterrestrial side with a more fluid appearance.

Those who have viewed the film are aware that none of these ideas for wings made it into the final cut, but they reveal that in the finale battle, things might have been taken in a very different course.

Fans of the movie may enjoy looking at additional concept art from it on Burn’s Instagram account, including different costumes for Carnage. You may view that here.

Home » Movies » Concept Art For ‘Venom: Let There Be Carnage’ Depicts a Flying Modification For the Symbiote