If you’re a Riverdale fan chances are you are going to love the new poster The CW just released for Season 2.  It’s got all of your favs dressed in Riverdale’s signature dark and dreary colors, except for Betty and Cheryl of course, looking like they are either about to go solve another crime or start some drama. Or, if you’re Archie, sign up for open mic night.

Keep your friends close. Your enemies closer. #Riverdale returns Wednesday, October 11 at 8/7c only on The CW. pic.twitter.com/OoYgm8gUyV

However, there was someone that was not feeling the new poster so much. Cole Sprouse, aka Jughead aka the king of Twitter trolling, took the moment to do what he does best – throw some shade. 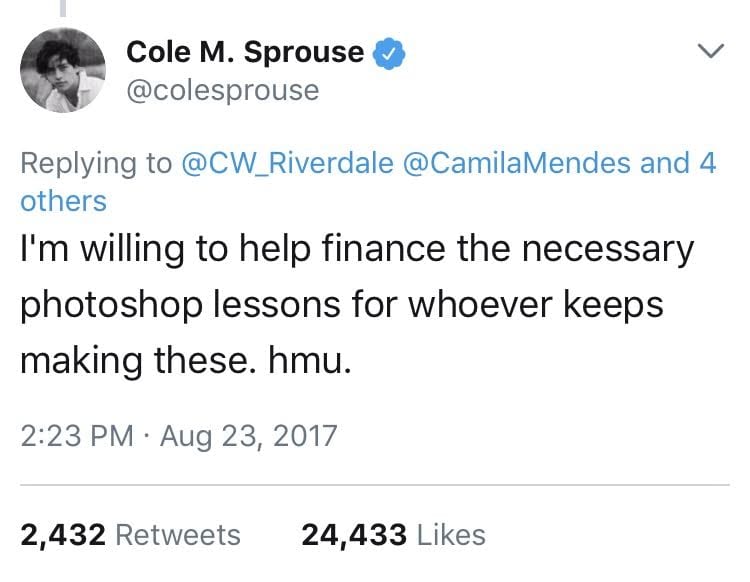 There is something so savage yet pure about Sprouse roasting his own employer, but the laughs only lasted so long. The tweet was soon taken down with a follow-up tweet that read:

me: better to be safe than sorry heh heh.

Whether or not this tweet has anything to do with his Photoshop burn remains to be seen, but I would say it’s a safe bet.

Of course, Sprouse’s fans were here for it.

Be sure to catch the Season 2 premiere of Riverdale on October 11th on The CW!

14 ‘Riverdale’ Memes That Are Too Funny

Six Archie Comics to Read If You Love Riverdale