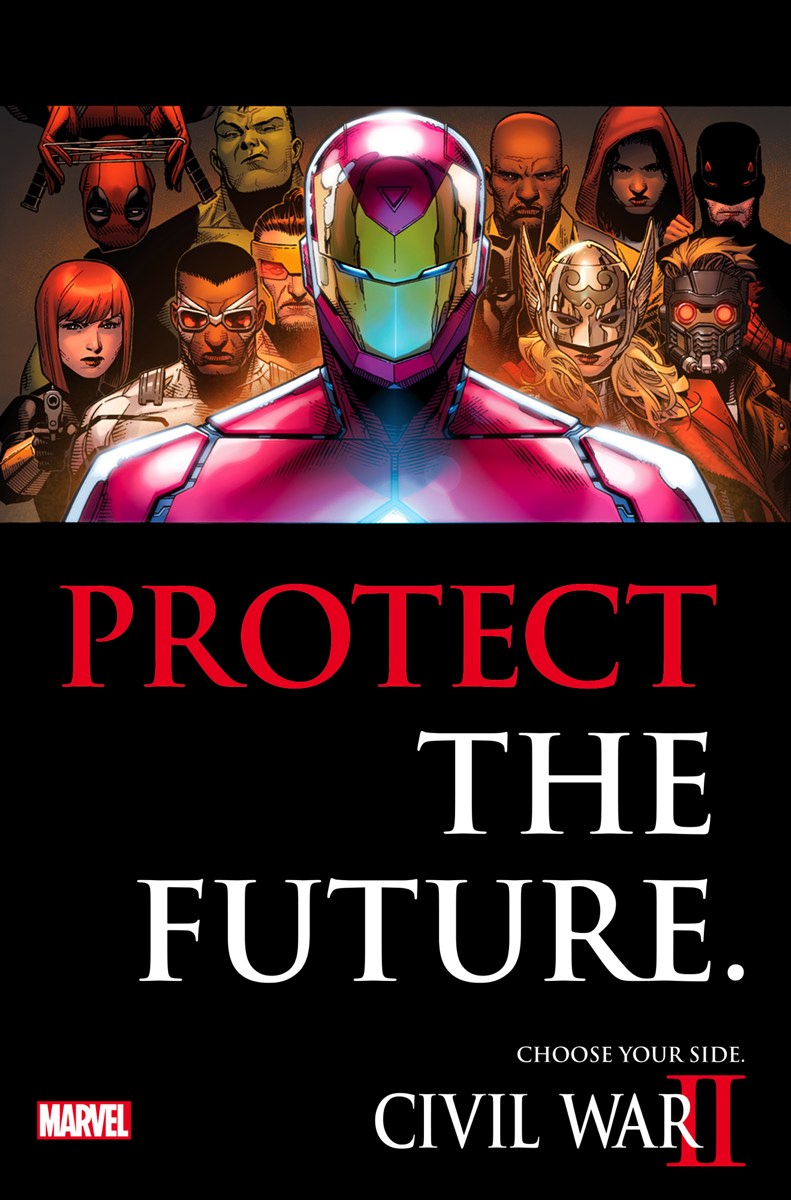 With
today
being the first real day of
March Madness it only makes sense that
Marvel would finally
announce the teams for the upcoming
Civil War
II event this summer, and man are they kind of
surprising. Over on Team
Iron Man,
which is looking pretty stacked if you ask me, you have Thor,
Star
Lord, Black Widow, Sam Wilson’s
Captain America, Black Panther, Daredevil,
and Deadpool (more on him soon).
Then over on Captain Marvel’s
team you have
Ant-Man, Steve Rogers’s Captain America, Vision, Spider-Man
(Peter Parker
style), Winter
Solider, Hawkeye, and She-Hulk. The team dynamics are very
interesting here,
and it’s nice to see that Steve
Rogers and Tony Stark still
can’t see eye to eye on things. Makes you miss
the first Civil
War
days, doesn’t it? But I think the clear edge, on paper at least, goes

to Stark here. Although if the
first Civil War taught us anything it’s
that these teams are not
permanent and I expect some flip
flopping.

Marvel wasn’t done
though as there were more
images released today. Yes more! Over on CBR we got our first
glimpse of Miles Morales
in Civil War II and
it’s not looking good for
the web slinger as he’s battling Sam Wilson.
This teaser is interesting for a

number of reasons. For starters it wasn’t that long ago that Miles was
using
Sam’s shield to ward off
an evil demon (see Spider-Man #1 for full
results), and that’s
because these two guys are Avengers
buddies. Well,
they’re on the same team which begs the question is this
All New All
Different
Avengers team built to last? It would appear that since Miles is

fighting the Sam Wilson Captain America
that he belongs to the Captain Marvel
team, but you’ll notice he is absent
from the artwork. As a matter of
fact
he’s not on the art work for either side. Hmmmmm. If you’re looking
for other
characters who had
teaser images but aren’t present in today’s release look no
further than
Ms. Marvel who is also no where to
be found.

Working theory. I’ve got a
weird feeling that Miles is actually

looking to fight. Look at the
doofy look on Miles’s face as he’s getting hit
with the shield, it almost
says this wasn’t supposed to
happen this way. I
could see Caps confusion though with Peter Parker being
on the Captain Marvel
side it
would be a safe assumption that Miles would follow suit (Miles is quite
the
fanboy). Where does Ms. Marvel
fall into this though? It was made quite
apparent that she is not on Captain
Marvel’s team (as you recall
her teaser
image had her ripping up a picture of Carol) so why is she not
listed on the
teams? I’m
wondering if these young heroes (Miles, Nova, and Ms. Marvel) try
and sit
this one out until something forces
their hand. Considering how these
heroes are the future of the Marvel
universe it makes the tag line “Protect
the
Future. Change the Future” a little more ironic.

And that brings us to Deadpool, a character who was no where to be
found
during the first Civil
War event. According to our team breakdown,
Senior Pool has sided with
Team Iron Man (love the image of
him striking a
Spider-Man pose), but a teaser image released to Entertainment
Weekly might suggest otherwise. According to
this teaser Deadpool
is, hilariously, playing both
sides. This could very well
be my favorite teaser so far because of the
sheer ridiculousness of it. What

does Deadpool really have to gain here? I think he’s just happy to see the

chaos and is willing to stir
the pot any way he can. You know, be a real team
player. Yet this begs the
question why put him on the art
for Team Iron Man if
the teaser is implying he wants to play both
sides.

Civil War II is still months away, sadly, but things are

really starting to heat up. I wonder
with the team breakdown being released if
Marvel is going to stop with the
teaser images. I feel more
questions were
raised today than answered. There are glaring omissions from
both teams which
means that
this conflict could run a bit deeper than just face value. And
speaking of
the conflict, what has got these
guys fighting?

The press release reads as
such, “A mysterious new

Marvel character comes to the attention of the world, one who has the power
to
calculate the outcome of
future events with a high degree of accuracy. This
predictive power divides
the Marvel heroes on how best to
capitalize on this
aggregated information, with Captain Marvel leading the
charge to profile future

crimes and attacks before they occur, and Iron Man adopting the position
that
the punishment cannot come
before the crime.“ Sounds like some
straight up Minority
Report action going on in the
Marvel universe. Not
only that but it appears that the debate will become
heated when one Marvel

character kills off another. The knowledge that the event could have been

prevented is enough to split
the universe and bring them to blows. I’m in.
Let’s just do this thing
already.

Civil
War II will be released in June, with a Free
Comic Book Day preview being

released in May, and is written by Brian Michael Bendis.

Alright
Geeklings it’s time to hear from you. What do you think of
the teams? Who
has the advantage here, Team Iron
Man or Team Captain Marvel? Any
ideas what hero could be dying? Where do you
think Miles Morales, Ms. Marvel,

and Deadpool fit in? Let me know in the comments.