Ciara Renée is an actress, singer, and musician. She is best known for her roles on Broadway as The Witch in Big Fish and the Leading Player in Pippin, as well as portraying Esmeralda of The Hunchback of Notre Dame. But many of us know her as Kendra Saunders aka Hawkgirl in the CW series DC’s Legends of Tomorrow.

I had the pleasure of speaking with Ciara at this past weekends Heroes and Villains Fanfest New York\New Jersey about her career and  experience playing Hawkgirl. 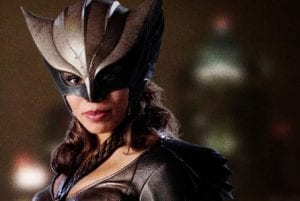 Michael Garone: Hi Ciara!  Looking back at her debut on the Flash and the first season of DC’s Legends of Tomorrow, please talk about Kendra’s growth in such a short span of time.

Ciara Renée: I think it was a re-imagining for her. Learning you’re a superhero and your reincarnated and there’s other versions of you that exist! You have a soulmate too so it was a lot to take in especially since I think Kendra was, in my opinion kind of like a loner who didn’t really know what she was doing with her life. She just moved away from her family to a new city to try and figure it out and she had a job that she didn’t really care about either so she was like I do not know what else to do. And then all of a sudden her life completely changed and I think it was good in a lot of ways because it made her make some choices and some real decisions about who she is and what she believes in. I think that there is so much more to be discovered for her but she definitely went from being a very perky kind of normal type of person to having to take on all of this responsibility and not really ready for it.

MG: Will we see the Hawk Family return for season two?

CR: I do not think we will see them in season two, at least not at this point.

MG: Well I hope that we see the Hawk couple return. What new projects are you working on?

CR: I have changed my focus from acting and started writing and producing. It’s really fun and great to see the other side of this business and what it really takes to make these shows happen. To schedule and market your show is very interesting! I just had a show at 54 Below in New York. It’s a presentation of a new musical I am writing called All About Love! It was really great but also a steep learning curve to figure out how to be a producer, marketer, writer and director.

Be sure to check out Ciara’s latest adventures on her website: https://www.officialciararenee.com/

DC’s Legends of Tomorrow will return this fall on The CW.