So the holiday season is upon us and a lazy day with a blanket, popcorn and a Christmas movie is the perfect way to spend your Sunday afternoon. Now for normal people that would mean turning it to the Lifetime or Hallmark Channel but for ME, it is time to whip out the DVD’s and watch the movies that make others cringe and shudder. The movies that are considered a little sick and a lot twisted but I will give you a run down and see if you a fan of the Christmas Movies You Should Not Let Your Kids Watch Club. 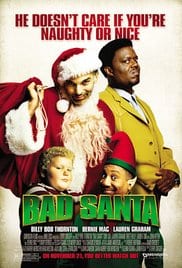 ‘Bad Santa’—The story of Willie (Billy Bob Thornton) and his sidekick Marcus (Tony Cox) and their scam of pulling off mall robberies every Christmas by playing shopping mall Santa and his little elf. Willie, however, is the farthest person from Santa as you are going to get from showing up drunk, peeing on himself, fornicating in the ladies “big and tall” and well he hates kids. The duo shows up in a Phoenix mall where Bob Chipeska (John Ritter) is the manager and Gin (Bernie Mac) is the mall detective. The movie is full of sex, drinking, cursing and Christmas cheer well depends on your definition of Christmas cheer.

‘Bad Santa 2′—This movie is a sequel to ‘Bad Santa’ of course we catch back up with Willie (Billy Bob Thornton) 13 years after his sidekick Marcus (Tony Cox) tried to kill him. Marcus reaches out to Willie via “The Kid” (Brett Kelly) from ‘Bad Santa’ with an offer Willie cannot refuse. However, when Willie arrives in Chicago he learns that Marcus has teamed up with Sunny (Kathy Bates) who turns out to be Willie’s own mom. Together they all plan to rob a charity at Christmas. Finding himself back in hell oops sorry I meant the Santa suit the Christmas hilarity ensues. 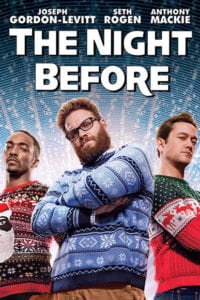 ‘The Night Before’—This is the story of three friends who started a tradition of spending Christmas Eve together after Ethan (Joseph Gordon-Levitt) lost his parents in a car accident. However nearly 15 years later Issac (Seth Rogen) is married with a baby on the way and Chris (Anthony Mackie) has become a famous football player. That has left Ethan behind as a newly single and struggling musician who does not want this yearly tradition to end. They agree that this is the LAST Christmas Eve together and they are going out with a bang. In search of the elusive “Nutcracker Ball” they get sidetracked by drugs, karaoke, drugs, old girlfriends, drugs, possible girlfriends, drug dealers, Miley Cyrus and oh did I mention drugs? This is not just a Christmas movie, they throw in all the holidays so that everyone is offended. 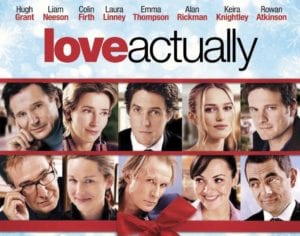 ‘Love Actually‘—This is one of those awesome movies with several different stories going on at the same time and eventually they all are connected at the end. We have a story of Daniel (Liam Neeson) and his son Sam (Thomas Brodie-Sangster) and how they deal with the death of their wife and mother. Then we catch the drama in the marriage of Karen (Emma Thompson) and Harry (Alan Rickman). The partnership with Rockstar Billy Mack (Bill Nighy) and his manager Joe (Gregor Fisher). However, the biggest storyline for ‘The Walking Dead’ fans is that of Mark (Andrew Lincoln) and his WCW and his best friend’s wife Juliet (Keira Knightley) With a whole lot of storylines I am leaving out including the couple who are working as “stand-ins” for adult film stars there is a lot of nudity and cursing hence the probably should not watch with your kid’s part of the topic. 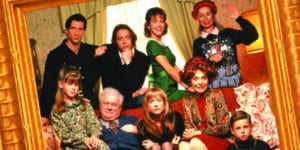 ‘Home for the Holidays’—This is actually a Thanksgiving movie, but it deserves to rank up at the top of the movies you must watch. We meet Claudia (Holly Hunter) who flies home after she loses her job, sleeps with her boss and leaves her teenage daughter Kit (Claire Danes) who is probably going to sleep with her own boyfriend. She is home with her parents, her eccentric aunt, her uptight sister, her brother Tommy (Robert Downey Jr.) and his friend Leo (Dylan McDermott). They continually spiral out of control as Thanksgiving dinner comes and goes. They try to remember that family is the most important thing but so is sanity.

Expect A Christmas Musical Special on Bob’s Burger This Season

Hallmark Is Bringing You 33 New Christmas Movies This Year

Watch When They Cast Ralphie in A Christmas Story Live!