For the first time since she announced that she was expecting her first child with boyfriend David Boyd, Christian Serratos stepped out in a simply beautiful off-the-shoulder black dress, proudly showing off her baby bump at this year’s PaleyFest LA in on Friday night. 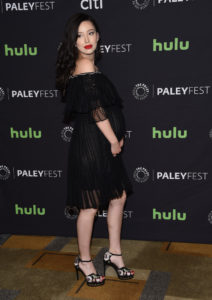 The cast kicked off this year’s series of panels which take place over the course of 9 days and will include panels from American Horror Story, This Is Us and The Flash, just to name a few. Moderated by Los Angeles Times journalist Greg Braxton, the panel was asked about what the show is leading up to in the season 7 finale and what is in store for us in season 8.

Show runner Scott M. Gimple said that the show’s finale on April 2, will begin whole new era. “It’s about setting up this gigantic, epic tale to come — not only in Season 8, but beyond.” He went on to say that the Season 8 premiere will be The Walking Dead’s 100th episode and it is not so much about celebrating that milestone but, “more about setting up the next hundred episodes.” (Well, my Sunday nights are going to be booked for the next several years.)

Hightlights of the night’s panel included:

*Andrew Lincoln (Rick Grimes) recalling Rick losing his will to fight after losing Glenn and Abraham. He praised the courage of the writer by saying, “I thought it was such a brave thing to do: to smash a hero, an archetype. And I thought, ‘I’m gonna do it with everything I have… and be in a shame-free zone.’” He also jokingly admitted the way he would like Rick to die. Yes, you heard that right. He wants him to jump off a bus in some sort of “heroic act” while going through the desert. He goes on to say that he patches himself up and that maybe he is in fact the cure. Josh McDermitt chimed in and added, “Then Eugene comes in a dune buggy and runs over Rick.” Well they are a long ways away from any desert. 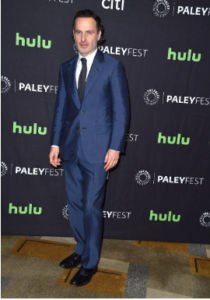 *Robert Kirkman spoke about Jeffery Dean Morgan’s portrayal of Negan, saying, “He [Negan] is this horrible person… but he has this spark to him that’s really engaging and really entertaining. And Jeffrey portrayed that so well… there’s a warmth to him even when he’s performing these horrible things. I don’t know how he pulls it off.”

*Josh McDermitt (Eugene Porter) talked about Eugene’s decision to fall in line with Negan. “Eugene is scared. He’s trying to protect himself. And why not align yourself with the man who’s causing the most fear in your life?… Throughout the show, we’ve seen him adapt and change. That’s how he survives. He lies and manipulates. He’s like a cockroach, man!”

*Melissa McBride (Carol Peletier) stated that she doesn’t quite know why Carol and Daryl click so well together but that she always has a “good time” with Norman (Daryl Dixon).

*Lauren Cohan (Maggie Greene) said that the baby that she is carrying is what is inspiring Maggie to keep going. “What other reason would there be to experience such loss… than to have life inside you? You still have to survive. When you still have light to share, that’s just who you are. The more people she loses, the stronger the fire burns in her.” 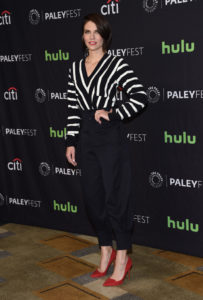 Christian Serratos (Rosita Espinosa) said that she is learning from her character. She goes on to state that “She’s remarkably brave and we’re seeing that this season,” she continues by saying, “We’re a family so watching them go through something tramatic is terrible but she experienced that trauma and we’re seeing the repercussions about that. And what I love about the show is that we’re seeing no two people can experience trauma the same way. She’s still always true and honest to who she is, which is a little rougher around the edges.” 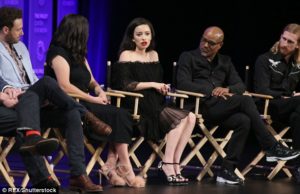 Those were just some of what was said during the panel. As soon as I locate and upload the video I will be sure to to add it to this article. After the moderator’s questions, the panel opened up to audience questions.

A couple of the questions asked were:

For Andrew Lincoln: What was it like to film the honeymoon scene with Daiai Gurira? To which he answered: “It was amazing to work, and it has been since the get go, with Danai. She’s so committed to this role. To explore that part, they pull so many different qualities out of each other. That episode was just weird! To be laughing, to be smiling, and to be so joyous.”

Seth Gilliam was asked: What supernatural entity does he want to tackle next? His answer was, “I’d like to do some sort of project with aliens.”

Kirkman answered a question that was brought up regarding the “Rick’s Coma Dream” theory with a firm but simple “NOPE!”

The last question of the night was for Andrew inquiring whether Rick and Michonne would ever have a baby. Lincoln stated, “I mean, we’ve gotta repopulate the world.”

PaleyFest continues at the Dolby Theater for the next 9 days. Tickets are limited but still available on their website.

The final episodes of Season 7 of The Walking Dead air every Sunday through April 2nd at 9pm/8pm on AMC.

Home » Fandom » Christian Serratos Shows Off Baby Bump along with ‘The Walking Dead’ Castmates; Finale Teasers and ‘Beyond’ at Paleyfest 2017