Just a few days ago, the original Child’s Play film celebrated the 30th anniversary of its theatrical debut. Now, the familiar horror flick is being reimagined with a contemporary twist, and on Monday, Orion Pictures officially revealed the film’s premiere date. The new, updated version of Child’s Play will be coming to theaters on June 21, 2019.

The upcoming film boasts an impressive cast including  Aubrey Plaza (Legion, Parks and Recreation), Brian Tyree Henry (Atlanta, If Beale Street Could Talk), and Gabriel Bateman (Lights Out, American Gothic). Much like the original franchise, the reimagined Child’s Play will follow Karen (Plaza), a mother who gives her son Andy (Bateman) a toy doll for his birthday, unaware of its more sinister nature.

In addition to announcing the film’s premiere date, the studio also dropped the film’s first poster. In the below poster, we see what looks like a rundown and abandoned warehouse with a toy box left in the middle of the floor. The box is a “Buddi” toy which appears to be an app compatible, high-tech, batteries included doll. The slogan on the side of the box says, “He wants you for a best friend.” On the side of the box, we can see that the Buddi toy, “comes equipped with a highly intricate, cloud-based voice recognition engine capable of identifying speech.” The rest of the box is a little difficult to read, but we can already see  how this new version can be extra technologically terrifying

Check out the poster below. 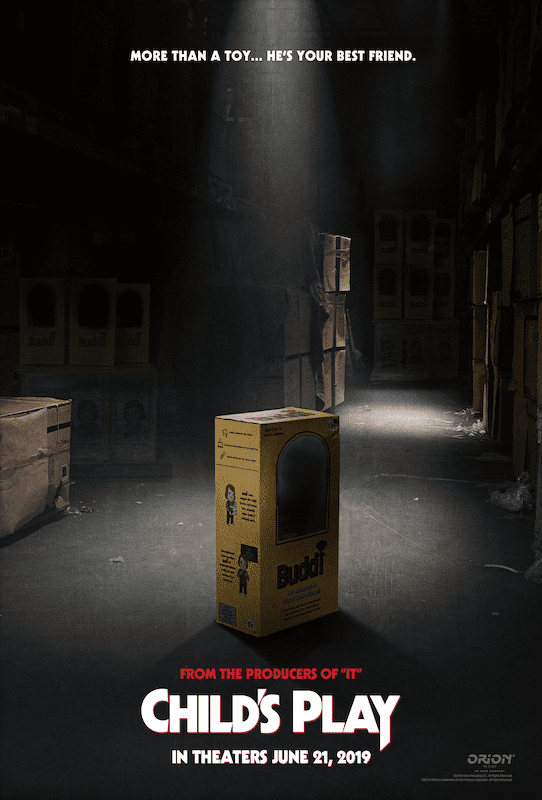 What do you think about the contemporary take on Child’s Play? Let us know your thoughts in the comment section below.