Another year has come and gone for the popular C2E2 convention, a pop-cultural powerhouse in the midwest, and one of the United States’ largest conventions, behind San Diego Comic-Con and New York Comic-Con, though Chicagoans won’t want to hear about that, given that their city has often played Second (city) fiddle in popularity to the coastal metropolises.

This year’s C2E2 played host to celebrities like the Karate Kid himself, Ralph Macchio, Alicia Silverstone and the MCU’s Paul Rudd.  Fans could interact with, and get autographs from, all of these and more–for a price, ranging from $50 to $180 per celebrity. 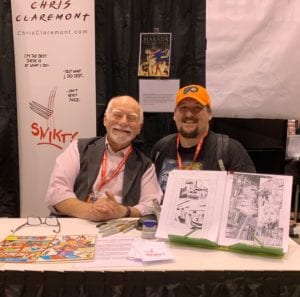 Elite, popular comicbook artists and writers were on hand at the 27-row Artists Alley.  Fans could rub elbows with legendary creators like the X-Men’s Chris Claremont or New Teen Titans artist George Perez and writer Marv Wolfman.  Indie creators like Jim Mahfood mixed in with the more well-known Matthew Rosenberg or Jason Fabok, alongside indie legends like Dave Dorman.

Retailers like Graham Crackers Comics or Buy Me Toys sold their comics and action figures to the mulling crowd, while creative minded retailers like Awesome Minis sold their hand-crafted wares to swarms of fans.

Panels such as the Clueless reunion panel and the Marvel’s Next Big Thing panel drew large crowds, and cosplayers flooded the show floor.

One could easily be overwhelmed by the sheer enormity of it all, and finding help was at times a difficult task.  An information booth was positioned in the middle of the show floor, but it was hard to find and not well advertised.  Aside from the confusion, the atmosphere and the energy of the con itself was electric.

Families had a zone exclusively to themselves, which included an area for little fans to run around uninhibited, and an area policed by the troopers of the 501st Legion cosplayers, interacting with and entertaining the little ones and their parents alike.

Overall, the overwhelming impression of C2E2 was that of wonder, fun, excitement and entertainment, and that, for all intents and purposes, is the best kind of con to attend.

Rich Davenport graduated from Concordia University in St. Paul Minnesota with a B.A. in Mass Communication. He is a lifelong comicbook reader, a film fan and a hardcore video gamer. He also makes a lot of funny faces in pictures, much to his wife’s chagrin.