Chelsea Clinton was almost cast in a real-life version of Home Alone in Russia. Of course, the Clinton family is anything but welcome in Russia, making this prospective farce much more dramatic than a film.

The blunder was exposed during a game on The Tonight Show with Jimmy Fallon Tuesday night, when Hillary Clinton and her daughter Chelsea stopped by.

The game was designed to expose the candidates’ personalities and worldviews in a fun and entertaining way. Hillary  took her turn after Chelsea had already spoken, but she was prepared for that because of the practice round earlier in which they had both been challenged to give the same response if appearing on The Tonight Show with Jay Leno at the same time. When asked, “What is your craziest family vacation memory?” Clinton replied, “I hope she doesn’t remember this because it’s pretty traumatic.”

Everyone was all ears as Hillary revealed, “We took her to Russia when we went on a state visit when Bill was president. There’s the formal goodbyes so Bill and I were ushered into the limousine to head to the airport not knowing that we had left her back.”

The audience responded with a mix of shock and amusement. When it was her turn to speak, Chelsea explained that their most unforgettable holiday memory was “When they left me in the Kremlin.”

Although it is an laughably unreal admission, the reveal comes after WNBA star Brittney Griner was detained and imprisoned in Russia for drug possession. Many people speculate that Griner is being used as a pawn in a political game between American and Russia.

Although the media painted a negative image of then-Russian President Boris Yeltsin’s upcoming visit to America in 1995, his meeting with Bill Clinton went much differently. In fact, Yeltsin made Clinton laugh so hard that tears were streaming down his face. When asked about the successful meeting by reporters afterwards, Yeltsin simply stated, “YOU are the disaster.” 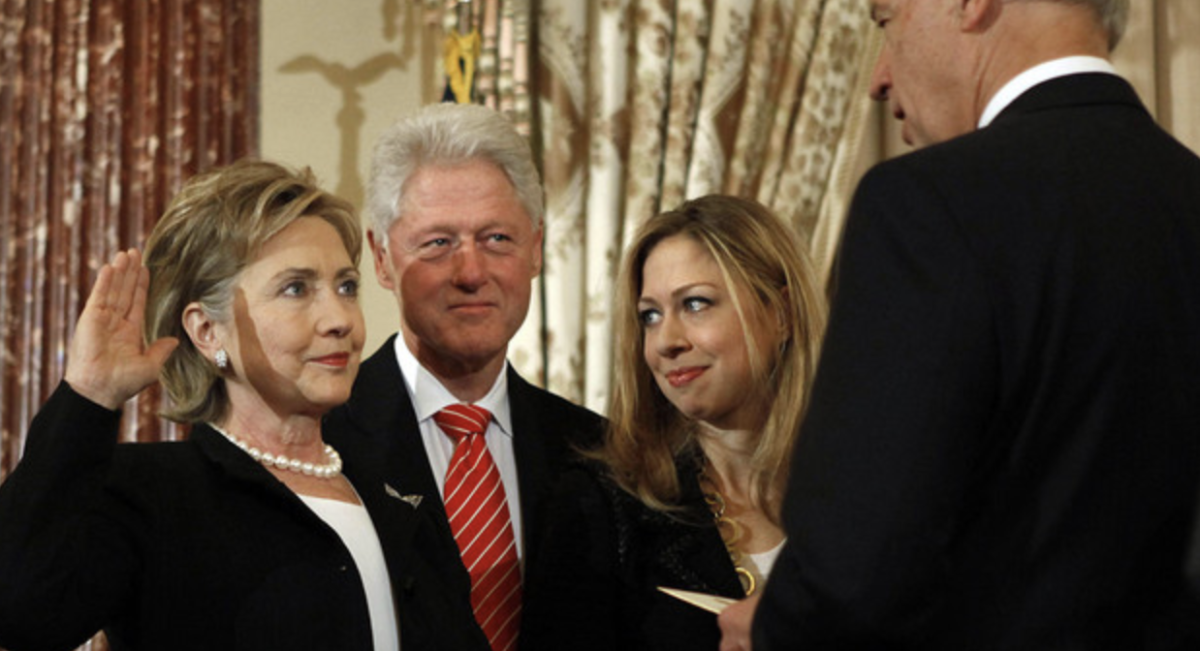 Nothing, surely, is more hilarious in the Yeltsin-Clinton relationship than when Yeltsin, in 1994, was so intoxicated late one night while staying in Washington D.C. that he ended up on the street in his underwear shouting for pizza. It’s good fortune for him that the secret service arrived quickly and not only provided him with food, but also put him back on track. Taylor Branch’s 2009 book The Clinton Tapes covered this incident.

As for the Clintons visiting Russia, it occurred five times during Bill Clinton’s presidency, and on which trip the Chelsea drop-off took place isn’t clear, although they all happened while she was a teenager.

After Jimmy Fallon’s incredulous reaction to Hillary Clinton’s mortifying comment, the ex-First Lady–who didn’t mention how long her only daughter was supposedly left in someone else’s charge–said, “Can you imagine leaving my only child in the Kremlin?”

We can only assume Yeltsin would’ve taken care of her and perhaps even given her some pizza.