If you’re a parent or know someone who is, you know that when it comes to the birthday party of a child, nothing is off limits. Those wishes become a parent’s mission and suddenly, Etsy searches and party stores are the must visit places to put together a unique and special day.

For some parents, it’s an easy theme. Princesses, Batman, Paw Patrol, Sesame Street, etc. the beloved characters that we all know – and that stores stock merchandise of. For other parents, it’s a bit harder to find what it takes to fit their kid’s theme. Especially when kids are requesting parties more unique than ever before.

Lately, we’ve seen everything from Costco to the Golden Girls as party themes but the most recent one to sweep the internet is absolutely genius, like, we can’t get over it. 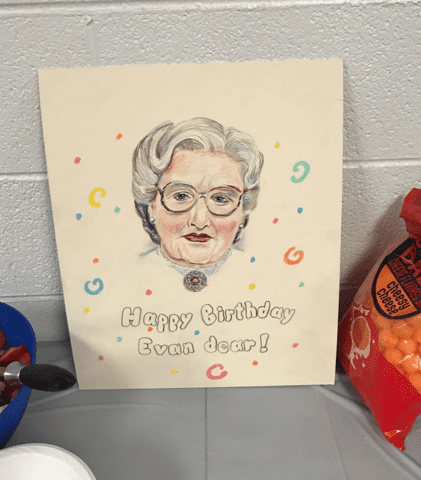 A 4-year-old from Wyandotte, Michigan celebrated his birthday with a Mrs. Doubtfire tribute and it is everything. His mom, Laura, said that he saw the movie about half a year ago and loved it. It’s a Robin William’s classic, so who wouldn’t?

‘My son saw the movie about six months ago and just loved it! He thought it was very funny and who doesn’t love Robin Williams?’ Laura explained to Huff Post.

His Mrs. Doubtfire party took place at a gymnastics center and the decorations, cake, and snack table were decorated so spectacularly that we wish we’d been in attendance. There were drawings of Euphegenia Doubtfire, a perfectly decorated cake, and a ‘run-by fruiting- sign near some fruit trays.

If that wasn’t cool enough, the goodie bags for party-goers had the ‘Thank you for coming ___ dear’ messages attached to them.

Evan’s family went into overdrive to get the party just right for him, and Laura says she couldn’t have done it without them. His father travels a lot so everyone else stepped in to make the day absolutely perfect.

‘My motto with parenting is it takes a village! I was thrown for such a loop when Evan said he wanted a ‘Mrs. Doubtfire’ party, so I quickly posted on a local Facebook page, Downriver and Friends looking for a baker. That’s how I found Angie Claxon (Cakes by Sweetypants), who made the amazing cake.‘ 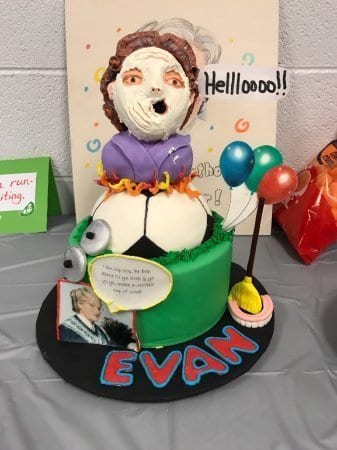 After some social media posts went viral, Laura said that she was shocked, but it was cool to see so many people loving his birthday theme. Evan was so thrilled by it, especially the cake, which Laura said was his favorite part.

‘I never in a million years expected it to get attention outside friends and family. It’s been so fun, though! Definitely something for the baby book.‘