Justice League The Snyder Cut finally released and gave us our first-ever live-action Darkseid. In addition to that, the movie was actually pretty good. The film was a lot better than the theatrical cut and on the heels of the release the writer spoke out. Christ Terrio has given a big interview about his experience working on two DCEU movies. Batman V Superman: Dawn Of Justice and Justice League. He spoke about why the films had to be so dark and about how writing them hurt his reputation. Now, Jerad Marantz, the concept artist has been sharing some images he worked on during Justice League. He shared a pretty cool look at Darkseid from the film too, who once again, can we agree was awesome in the Snyder Cut. Thank you Ray Porter! Check out the Darkseid concept art below. 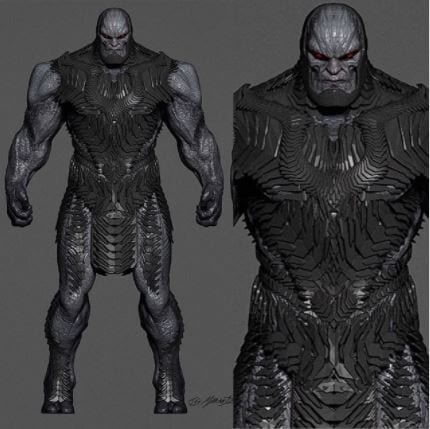 Porter posted the image to his Instagram. “Here’s the concept model I did of #Darkseid for Zack Snyder‘s justice league. It was a huge honor to take on this character. I build a lot of my characters in Z brush and this was a great way to work. I did a lot of different costume options with some repeated stroke brushes. I made a couple of different low poly pieces and rolled them over the surface of the body. Great way to find some happy accidents. I used the move brush to stretch A few pieces here and there. I had an incredible time working with costume designer Michael Wilkinson. He truly is one of the best in the business! #darkseid #dcu #conceptart #apokolips #zbrush #zachsnydersjusticeleague”

What did you think of the Darkseid Concept Art?

As I mentioned above the Justice League Snyder Cut is a big improvement over the Whedon cut. It’s currently available to watch on https://hbomax.com and you definitely should, provided you have four hours to kill. While you’re at it try to #restorethesnyderverse