Although he was raggedy in the film, the initial plan for him was not to be, so we learned from Marvel’s Avengers: Infinity War – The Art of the Movie.

The Marvel Studios Head of Visual Developments Ryan Meinerding had Steve Rodgers in a different outfit. It was also worn by recurring Captain America’s half friend/half foe US agent. The outfit was supposed to have less of the dark blue and much more black. A design of stars and stripes would be prominently displayed across the torso. 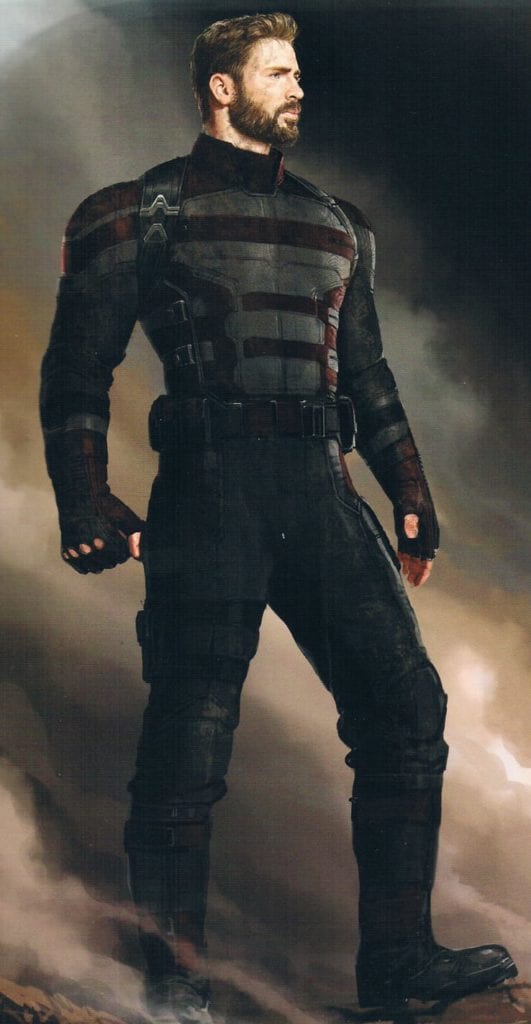 The Secret Avenger look came about because him being more clandestine and not part of a larger group like the Avengers meant that he could be wearing more black. That’s where the US Agent stuff came out, too, where he could be wearing black and red, and see if there was any value in that.” Meinerding explains that the early design inspires the new look.

Evans role was rumored to take the altered ego Nomad after the events of Civil War. Also, it was rumored that an alternative persona is used by Steve Rodgers after dropping Captain Mantle in the comic in the 1970’s. Joe Russo Infinity War co-director refuted the rumor.

Meinerding now reveals that Kevin Feige Marvel Studios President acknowledges his drastic change in status, but he wants to find a way for the character to retain his iconic look.

The costume took a long time because I think Kevin [Feige] was looking for ways of Cap still feeling iconic. He didn’t want him stepping away from the super hero stuff for the whole movie. And if you put him in fatigues at the beginning of the movie, there’s not really a reason for him to get out of them or change costumes at any point in the rest of the film. So we were searching for a while, including versions that were riffs on US Agent and some things that were riffs on Nomad — subtle one, but still trying to go there to see if there was something interesting to mine, as if he’s almost taken on a different persona.”

The scrapped design suggests that Captain America rival Writer Mark Gruenwald and the artist Kieron Dwyer created it. Even though the design is incredible, Chris Evans is unlikely to adopt the design in the next year’s Avengers 4. The concept art provides a fascinating look on how the character could have portrayed as a rogue superhero in the international scene without abandoning his patriot ideals.

We will say goodbye to Evans as Captain America in Avengers 4, which hits theaters May 3rd, 2019.

Marvel’s Avengers: Infinity War – The Art of the Movie is available now.