We’re just under a month away from the Season 2 premiere of HBO’s hit sci-fi drama series Westworld, which returns on April 22, and this newly released poster has us getting even more excited. Not to mention, how the poster was revealed to fans was super creative. First things first though, the new poster features a robotic vulture standing next to a hat reminiscent of Ed Harris’ Man in Black character surrounded by blood droplets. The backdrop is a desolate desert landscape with some pretty ominous clouds looming not too far in the distance and the tagline “Chaos Takes Control.” Check out the full image below!

The poster wasn’t just released online though, fans had to locate it through a series of clues provided by the cast. In order to unlock the poster, fans had to utilize the hints provided in these cryptics tweets from the cast.

#Westworld
CLUES ARE IN CHAOS

No one is in control.

All of the tweets encouraged fans to head to discoverwestworld.com to go talk to Aeden. If you enter in CONTROL TAKES CHAOS, Aeden provides you with the second half of the sentence: TO BECOME STRONGER THAN THEM.

If you flipped the phrase though, Aeden responded with a link labeled WELCOME TO THE NEW FRONTIER that directed you to the new poster!

It was such a Westworld way to reveal the poster and we certainly can’t wait to see what else they have up their sleeves in the next month! Series star Evan Rachel Wood already hinted that more clues and codes would be forthcoming. 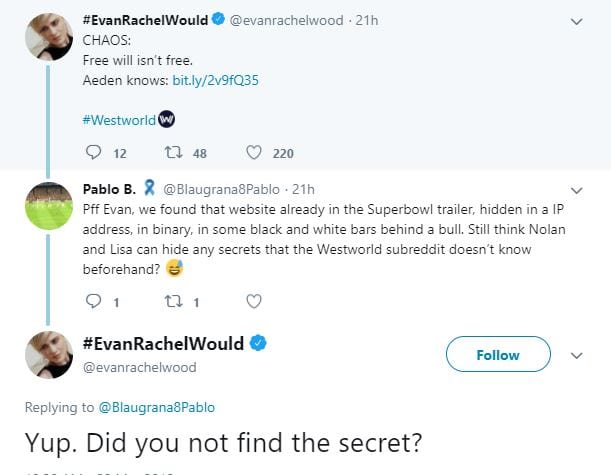 What are your thoughts on the new poster? Westworld returns on HBO April 22nd at 9 pm.