*This post does contain spoilers from Sunday’s episode of The Walking Dead. Read at your own risk*

It’s pretty apparent that fans of The Walking Dead could use a smile after this past Sunday’s heartbreaking midseason finale, in which the future of the zombie apocalypse Carl Grimes revealed that he had been bitten by a walker while fulfilling his mom’s request to always do the right thing by helping Siddiq.

So, it was a pleasant and touching surprise when Chandler Riggs ended up being the one who provided the much-needed laugh with a hilariously photoshopped photo and tweet on Wednesday:

don’t worry guys, i’ll be in the 2nd half of the season. in a white dress on a bridge. pic.twitter.com/08L2fPbReS

Fans will immediately recognize the moment that Riggs has so brilliantly photoshopped himself into, referencing the episodes following Lori’s death where she appeared to Rick through hallucinations in a white dress all around the prison.

It’s nice to see that Riggs is in high spirits despite going through one of the biggest changes in his life and career, and even though we definitely won’t be seeing Carl scurrying around in a white dress, it has been confirmed by Riggs and Showrunner Scott M. Gimple that fans can expect to see Carl in the midseason premiere early next year.

Despite the chapter of Carl Grimes closing, a brand new one is opening up for Riggs. He is moving to LA to focus on acting and other ventures such as his music and looks to be taking the jarring change in stride. While he may be unsure of what lies ahead if there’s one thing that we know for sure it’s that the Walking Dead family will be there to support him through it all! 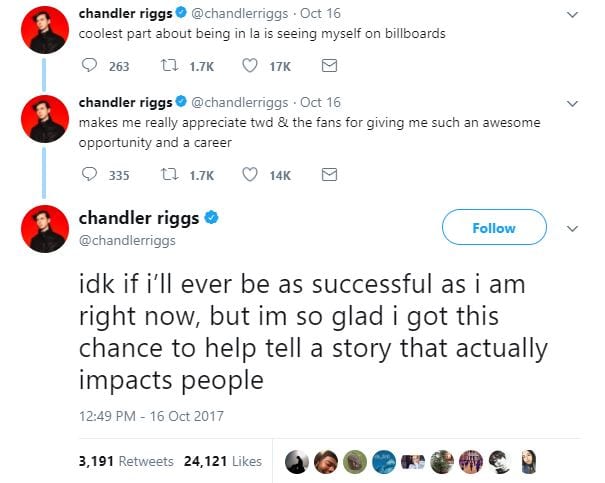 ‘The Walking Dead’: Twitter Reacts to “How It’s Gotta Be”