We’ve known Chad Michael Murray was playing Edgar Evernever for a little while but it seemed like we were never going to see him. Until now.

In the final moments of Chapter 51: BIG FUN, Murray’s character gives the show a standing ovation. How can someone be so sinister and yet be so mysteriously handsome at the same time?

Murray describes Edgar as calm, peaceful and open. “think he’s very much a listener and someone who is pretty decent at reading people”, said Murray.

“Edgar is a unique character. I think there are so many layers to peel back, so it’s a very slow burn on really discovering who this man is, what his background is, and where he comes from. It’s been fun for me to see where he’s going, what he wants, and what his quest is all about. Beyond that, I can’t say much. He’s the leader of the Farm. The Farm very much believes in Edgar and their cause,” adds Murray.

On his spine chilling entrance, it’s clear the Edgar is not someone who can be taken lightly.

“It’s an interesting entrance for a character that we’ve been waiting so long to finally meet,” he said. “I think you see his power in a very simple moment. When you show power, instead of just explain power, it’s much more powerful. You see that in that moment. You see what Edgar appreciates about the performance, and then you see the Farm join him. You see the power he has over everybody and that he’s taking Riverdale by storm.” 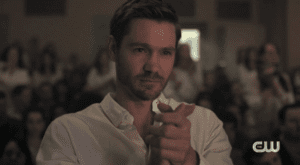 “I think when you look at any one particular person who can have that much power over a group of individuals and lead a group using their own theories and perspectives on life, that’s always fascinating,” he said. “It’s not just fascinating because of the cult leader, but also when you think about who the people in the cult are. Who are the people who were willing to listen? I think we all wonder, you know? Every time you hear comments about “people drinking the Kool-Aid” or whatever it may be, people are always fascinated by [the question of] “what happened in that person’s life to get them to that point?”

Ultimately, Murray was intrigued by Edgar and the cult world. Murray promises the rest of the season is “going to be a wild ride. Strap on your seatbelt.”

Riverdale airs Wednesdays at 8 p.m. on the CW.