As the results of election night began to roll in starting yesterday evening, people in the United States, and all over the world, were biting their nails, scratching their heads, and sitting in – quite frankly – bewilderment as the grey map of the US kept adding to it states filled with the color red. While politics and religion are two topics most people stay away from, today, a number of celebrities voiced their opinions as they navigated their emotions after Donald Trump was named our President-elect.

While their opinions were laced with pain and upset, their responses to the news were full of hope and encouragement, many choosing not to fight fire with fire but instead to motivate us to unite now more than ever and stand against hate.

Misha Collins posted an emotional video message on his Facebook page that ended in him holding back tears.

“The political process is but one way to affect change, I am going to make movies that change minds. I am going to spread a message of love and kindness that is infectious and I am not going to give up.” Misha began tearing up as he spoke his last line into the camera, “I love this country too much.”

Miley Cyrus had a very emotional reaction to Trump being elected president, but she still – even in her upset – said she welcomed him as our new commander in chief.

Keegan Allen used a direct quote from Donald Trump to show his disbelief at the way the US election turned out.

Sherri Shepherd asked a question that too many parents across the country asked themselves as the votes rolled in. How does anyone begin to explain that a man who has mocked the disabled now runs our country?

I don't even know what to say.

Matt McGory, like many of us, was at a loss for words altogether in the early hours of November 9th.  He went on to tweet about loving harder, questioning the intention of the white liberal male population, and quoting MLK as a means of inspiration to his followers.

Cheyenne Jackson used a play on words to describe what most Americans are feeling right now.

Maybe this is rock bottom and there's no where to go but up.

Hopefully, Amanda Seyfried is right, if this is the worst thing that so many imagined, the only possible direction now is up – moving forward.

You know what we do now? We finish building what we started and we FIGHT BACK! Lift your heads up brothers and sisters.

Mark Ruffalo inspired us all to fight back, to keep our heads up, and to go forward as a group of people who want equality, justice, and love.

The tweets from celebrities continued through the day and well into the evening as they tried to work out their emotions in a way that would be relatable, thought-provoking, honest, but also – in the midst of a lot of hopelessness – relay a message of belief that love will trump evil.  Perhaps one of the most poignant statements came from Chris Evans, Captain America himself, as he shared his disbelief. 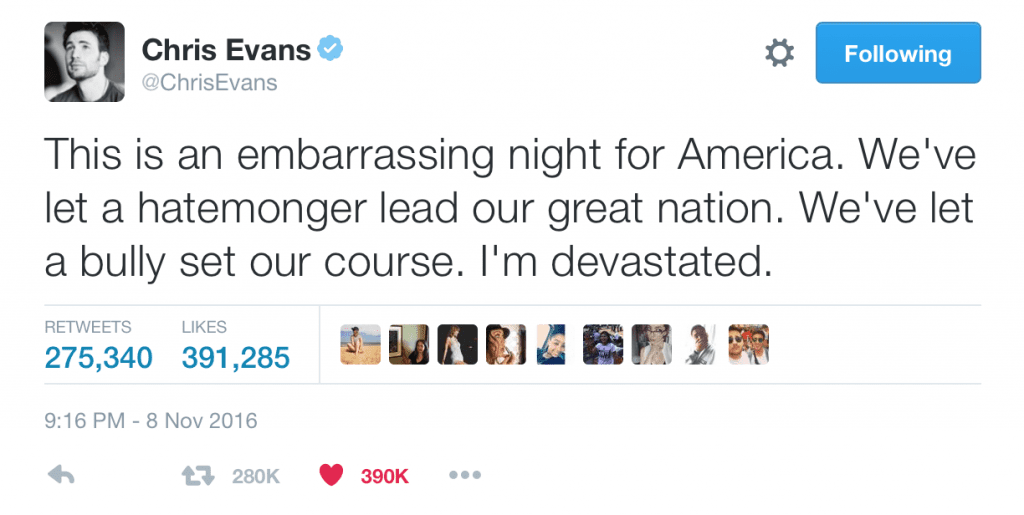 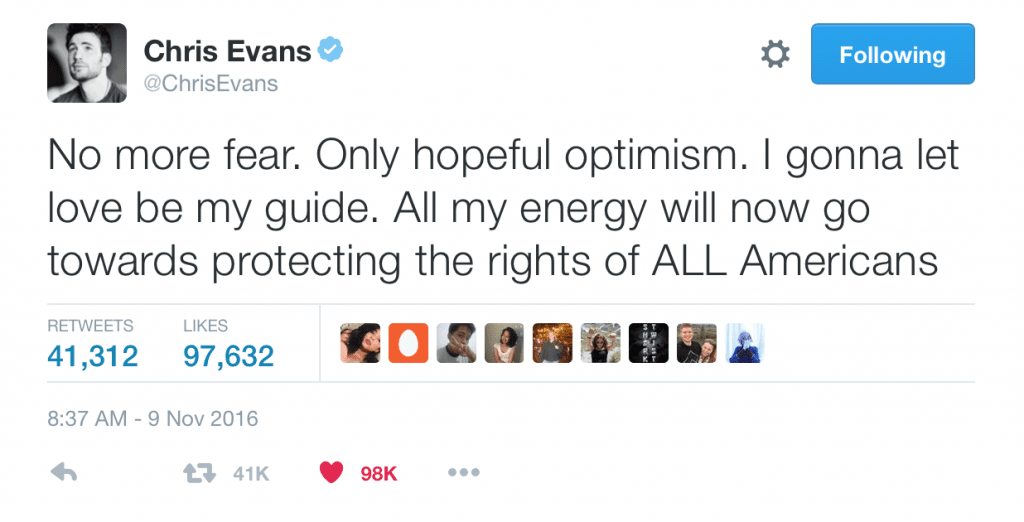 If these celebrity tweets show anything it’s that we can – even in the face of adversity, outrage, confusion, and fear – come together with the common goal of proving that love and kindness can win.  You can’t counteract darkness with more darkness so these celebrities are instead challenging darkness with light and we think that’s quite admirable.