In 1947, Robert Kanigher and Carmine Infantino introduced Black Canary to the world in Flash Comics #86. She would continue on to appear in other series including Justice Society of America and Justice League of America. In the Golden Age, she was Dinah Drake, who would team-up with her future husband, Detective Larry Lance, to fight crime. Originally, she didn’t have any powers, but over the years she became a world-class martial artist and gained her iconic “Canary Cry.”

Dinah has bounced around the DC universe, teaming up with numerous other heroes. She is most known for her involvement with the Birds of Prey and her romantic ties to Green Arrow. Black Canary also made the transition to television, appearing in Birds of Prey, Justice League Unlimited, Smallville, Batman: The Brace and the Bold, Young Justice, and Arrow.

In celebration of 70 years of Black Canary, Jennifer Tidwell and myself decided to reflect on why we love the character.

I never really knew the name Black Canary when I was younger (and don’t really know why). It wasn’t until I started watching Arrow that I really fell in love with the character. There were three different Canaries (Sara Lance, Dinah Laurel Lance, Dinah Drake) portrayed by three different actresses (Caity Lotz, Katie Cassidy, Juliana Harkavy), but each of them did justice to the character. Because of Arrow, I delved into the world of comics, picking up Gail Simone’s Birds of Prey. It made me fall even more in love with Black Canary and she is probably my favorite female hero.

To me, Black Canary is tough as nails and will fight to the end to protect those that can’t protect themselves. Her Canary Cry is an incredible power, but she is more than just her voice. She is witty and fun, but can get serious in a hurry. Black Canary is also a incredible martial artist and can keep up with the other renowned fighters in the DCU. Her leadership skills help make the Birds of Prey a great superhero team.

Black Canary is a great role-model for women in that she has a fierce devotion to those she cares about, whether it be the other members of the Birds of Prey or her husband (depending on which comic you pick up), and is a fighter. She never gives up as long as someone still needs help. I loved Katie Cassidy’s portrayal of Black Canary on Arrow because she started at rock bottom, but kept on fighting. She was told time and time again to leave the danger to Team Arrow. Laurel got the help she needed in order to become stronger and never took “No” for an answer. Her sense of justice and devotion to her sister’s memory is what kept her going. Eventually, she overcome the obstacles of alcoholism and self-doubt and became an important part of the team, saving them numerous times over.

All in all, Black Canary is a total badass and I can’t wait to see and read more of her story in the future. 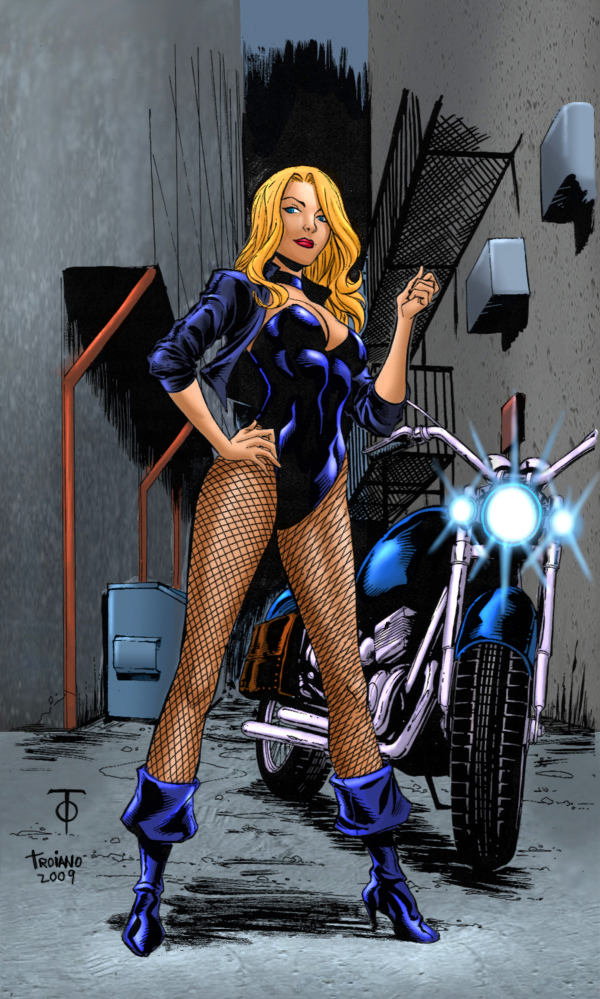 Black Canary has been my favorite superhero since I was a kid watching Justice League Unlimited on television. Every episode that focused on Dinah Laurel Lance (voiced by Morena Baccarin) stood out in my mind. She was snarky, she kicked butt, had one of the best superpowers, and she drove a motorcycle! Twelve-year-old me thought she was the coolest thing around.

There have been several iterations of Black Canary since then, both in comics and on television. She can be a difficult personality to get right, but there are a few prevailing traits. When people think of Canary, they probably think of Green Arrow and their tumultuous relationship. While I’m a sucker for a good story about these two, I wouldn’t consider the Oliver Queen a defining aspect of Black Canary’s character. What defines Black Canary is the idea that she’s a fighter—someone who never gives up, and always looks out for her friends, family, and the less fortunate.

Sure, most versions of the Canary have her awesome Canary Cry, but being a metahuman didn’t make Dinah Lance one of the greatest fighters in the DCU. It didn’t make her a great teammate, leader or mother throughout the last 70 years. Those accomplishments came from having passion, stubbornness, and a willingness to put in the work. A sarcastic sense of humor probably didn’t hurt, either. And those are the traits I think of when I see Black Canary.

Dinah is also a large part of the animated series Young Justice, voiced by Vanessa Marshall (who recently returned to voice Black Canary in Injustice 2). In this series, she takes on a motherly, supportive role as she looks after the teenaged heroes. That kind of compassion and steadfast leadership, alongside her physical strength, are perfect examples of what makes Black Canary a great hero.

If you’re interested in reading comics staring Canary but don’t know where to start, there’s a standalone graphic novel written by Paul Dini, titled Black Canary and Zatanna: Bloodspell. It’s a great introduction to the character, but I can’t say anything about Dinah Lance without also recommending Gail Simone’s Birds of Prey. Or, if you’re looking for ongoing comics, you’ve got three to choose from with DC’s Rebirth. Black Canary is a main character in Green Arrow, Batgirl and the Birds of Prey, and Justice League of America.