Oh please say it ain’t so! Can snuggling and cuddling your little furry purry babies actually make you sick? Maybe even kill you? Well according to a new study recently released by the Centers for Disease Control and Prevention, Cat owners should be aware that their feline family members could be in fact carrying the bacterial infection known as Cat-Scratch Disease or Cat-Scratch Fever. Every year, approximately 12,000 cases of cat-scratch fever are reported with about 500 of those cases requiring the patient to go to the hospital.

The actual disease is caused by Bartonella henselae which is a bacterium that is transmitted to cats trough flea bites and droppings. If the feline comes into contact with the infected flea’s droppings they can in fact become infected themselves. If infected, the cat has the potential to infect other cats and humans that they come into contact with. The bacteria is spread to humans if the cat bites or scratches them hard enough to break the skin. 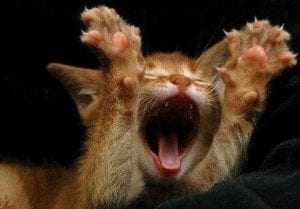 Some symptoms include headache, fever, red swollen area at wound site, and swollen lymph nodes. In rare cases, Heart and brain complications can occur such as encephalitis. The study also showed that the highest incidents are  people ages 5-9 years of age and living in southern regions of the United States.

Veterinarian, Greg Nelson, Director of surgery and diagnostic imaging at Central Veterinary Associates in Valley Stream, New York, emphasized in an interview given to CBS that the risk of humans contracting the illness is very low.

“We don’t want people who have cats to panic. The likelihood of your cat possessing this bacteria and giving it to you is extremely small, but with that being said, you shouldn’t play aggressively with your cat or teach them to bite or scratch,” he said.

He also stated that basic hand-washing should help a great deal in preventing the spread of the bacterium, as well as good old common sense such as keeping all cuts and scratches you receive from your cute and cuddly furball clean and infection free. More information regarding signs, symptoms and prevention, click here. 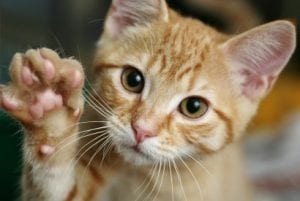 So there is no need for any of us cat lovers to bring out our hazmat suits the next time we want to cozy up to our kitties and in my case, 4 kitties. Yeah, I know, call me a crazy cat lady but to be honest, I’ve kissed, cuddled, snuggled, and hugged and have gotten numerous cuts and scratches through the years from bathing them and have never had an issue. But that is just MY OWN case. So please be cautious and aware and enjoy your cats. And if not, well, there’s always those cute cat videos on YouTube. Happy Cuddling!!!