Now that The Walking Dead has confirmed a significant time jump as well as some cast departures, there has been some question as to whether or not the Whisperers will come into the picture.

The Whisperers will be making their debut in season 9. The Whisperers are a very primal survival group. They wear walker skins and use herds of walkers for protection.

The Whisperers bring on some new faces. Samantha Morton (Fantastic Beasts) is playing the Whisperers’ leader Alpha and Cassady McClincy will be joining on as her 16 year-old daughter Lydia.

McClincy is 17 years old and has been acting since she was 10. She recently appeared in the film Love, Simon as Jackie has had a recurring role on Hulu’s Castle Rock along with guest spots in Ozark, Lore and Good Behavior.

In the comics, Lydia and Carl Grimes become romantically involved when Lydia decides to leave the Whisperers to live at Hilltop. Lydia plays a vital role in ending the Whisperer War.

Chandler Riggs’ Carl was killed off in the mid-season 8 finale so Lydia’s storyline remains unclear. The Whisperers were first introduced in the comics in issue 133 and Lydia remains alive and well at the Hilltop through the more recent issues. 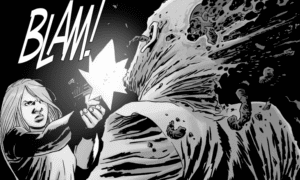 Showrunner Angela Kang opened up about the Whisperers during the season 9 Talking Dead Special saying “…we’ll go into a really great storyline that people are anticipating called The Whisperers, which if you’re a fan of the comic you know exactly what that means,” Kang said. “Although the way we do it may not be exactly the way it goes in the comic. We always remix things. If you don’t know what I’m talking about, you know, it’s better to learn as you go along.”

What will this “remixing” mean for Lydia and the Whisperers?