You might know Natasha Negovanlis from a little show called Carmilla, the webseries, which is loosely based on the novella of the same name by Sheridan Le Fanu, took the internet (and the LGBTQ community) by storm after its initial release in 2014. Negovanlis, who played the brooding vampire who reluctantly falls in love with human Laura Hollis (Elise Bauman) after Laura’s roommate goes missing in a string of weird events on Silas University’s campus, is back again, but this time starring alongside Pitch Perfect star Hana Mae Lee in the musical horror-comedy Haunters. 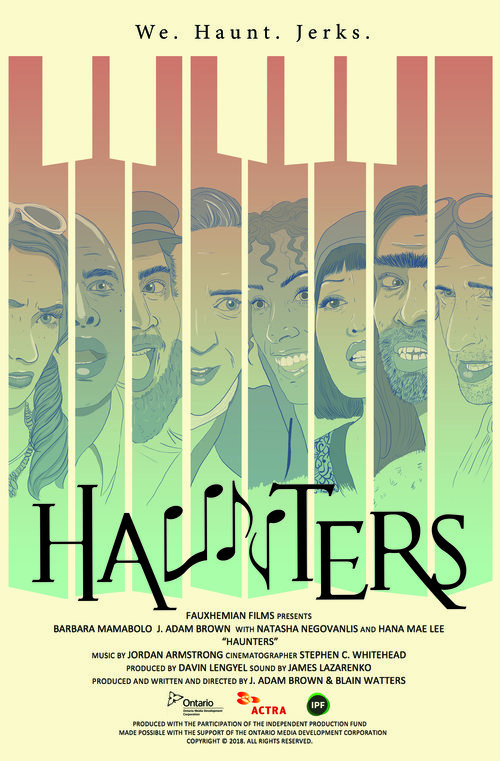 Haunters follows Iggy (Barbara Mamabolo), a YouTube prankster who takes a whole lot of pleasure in other people’s embarrassment and pain. But when Iggy suddenly dies and is sent to her version of an in between, she’s forced to get a taste of her own medicine as she haunts jerks, just like herself!

MCKENZIE MORRELL: For those who haven’t seen Haunters yet, can you tell us a little bit about this musical horror-comedy web series and the character of Penny?

NATASHA NEGOVALIS: Haunters is an innovative web series with a star-studded cast that follows the story of Iggy, a YouTube prankster sent to purgatory after a terrible accident and forced to find redemption by haunting other jerks. My character Penny was Iggy’s last victim before she died, and is a regular “girl next door type” until she’s inspired by Iggy to become a social media monster!

MM: Penny uses Iggy’s death to her advantage and pens this “IGGYS LAST VICTIM” charade. Why do you think she made this move? Did Iggy’s prank really shed light on the fact that Penny wasn’t as fulfilled as she once thought?

NV: I think Penny had always lived a pretty low-key and solitary life and because she was insecure she allowed Iggy’s relentless bullying to get to her core. Unfortunately, we don’t see Penny again after she experiences a haunting, but I’d like to think she was just trying the whole “social media starlet” costume on and hopefully returns to her true sense of self after learning a valuable lesson about what it really means to be a jerk!

MM: How do you connect to this character, what attribute or personality trait really resonated with you as a person?

NV: I personally don’t connect to Penny at all actually, which is why she was such an appealing character to me! Penny is totally outside of my regular type-casting, so I lept at the opportunity to try something completely different and outside my comfort zone. It’s fun and challenging to step into someone else’s shoes and make them empathetic.

MM: We. Haunt. Jerks. is the tagline of Haunters, which is brilliant, by the way. What excited you about this project?

NV: I was struck by the high quality of their original IPF trailer and the fact they were singing LIVE on camera, which is something we don’t see often in digital series! I just thought it was a really neat idea.

MM: Would you rather be a jerk or a nobody?

NV: A nobody, one hundred percent. Ain’t nobody got time for hauntings!

NV: So many! I can’t choose just one. But I do love Hana Mae Lee’s flapper-inspired number and any time Barbara Mamabolo sings as Iggy she lights up the camera! I’m all about badass women on screen!

MM: This web series is truly a triple threat: musical, comedy, and horror– seems your three strongest suits! Were you excited to mix all of the genre’s you’ve done separately– together?

NV: Ah, well thank you! I was super excited and then admittedly sad that I didn’t get to sing as Penny, but hey… maybe she can return for a second season and bust out a ballad! Wink wink to the creators.

MM: At New York Comic Con, I was the gal across the table asking all of the food questions… so, naturally– I must add one today. Since we covered donuts, let’s talk pizza. If Penny was a pizza, what kind of toppings would be on her– and why?

NV: I remember that! You have the best questions. Hmm. Well, pre-jerkification, Penny would be a sensible pizza with lots of veggies on it. Post-jerkification, she’d definitely be a Hawaïen style pizza because she’s quite the ham but also pretty colorful and sweet!

MM: Lastly, why should the audience check out Haunters? 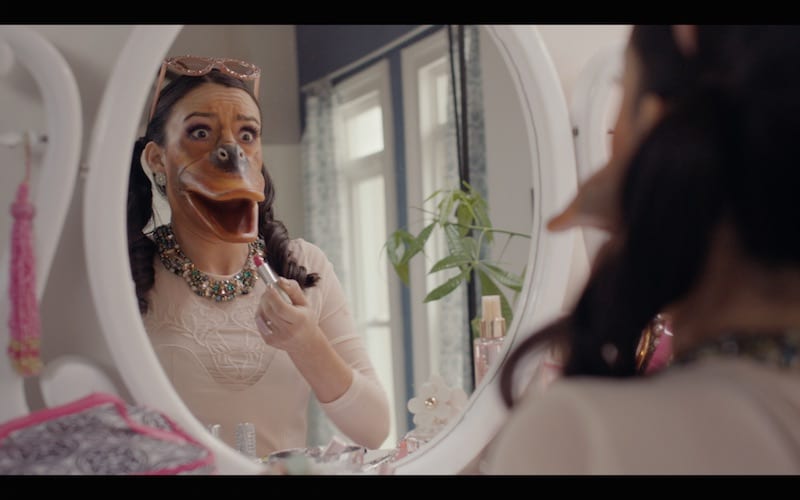