Welcome everyone to my once a month pro wrestling column here on Fan Fest! I’ll pick a topic each month to discuss and for my first topic it makes sense to talk one of the biggest news topics in wrestling right now:the long awaited arrival of “Woken” Matt Hardy.  Since Matt’s return to the WWE earlier this year, fans have been clamoring for the arrival of Matt’s talked about “Broken” gimmick from his time in TNA Wrestling.  After a long wait, WWE has seemingly given the green light for the gimmick minus a minor change: To control the trademark on the gimmick Matt has gone from “Broken” to “Woken”. Now that we are almost a month in to his run as “Woken” Matt Hardy, I’ll give my thoughts on the gimmick and if I think it will succeed in the WWE Universe. 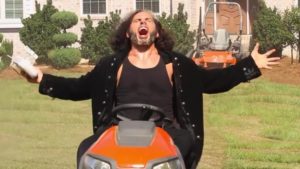 When “Broken” Matt Hardy first showed up on Impact Wrestling, I had no clue what to think.  I hadn’t watched the product in years and thought this was an act of a dieing wrestling promotion trying to throw everything at the wall to see if anything sticks. It was like a train wreck, you didn’t want to watch but you couldn’t stop. Each week, as the storyline got crazier and crazier and the cast of colorful out there characters grew, you couldn’t stop because you didn’t want to.  It quickly became the pro wrestling equivalent of Z Nation, combining a B-movie feel(drones,explosions,etc) with pro wrestling and it worked! So well in fact that whole episodes of impact became devoted to the ongoing storylines ending in massive battles at the Hardy compound. So when the Hardy brothers left Impact to return to the WWE at this year’s Wrestlemania, it quickly became the WWE’s most asked question: Will “Broken” Matt return? 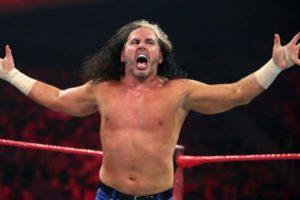 Earlier this month, we finally got our answer as following a loss to Bray Wyatt,  Matt started to show some familiar characteristics. Breaking down into a fit of “delete” chants it became clear that WWE had given the go ahead to continue his previously established persona.  What started as an exciting development though has quickly devolved into a repetitive segment each week on WWE RAW. The first week we were treated to a promising promo exchange between Bray and Matt that set the Internet on fire, quickly becoming WWE’s most viewed YouTube video that week. However, after two weeks of more of the same with no new developments and wierd Hardy laugh sessions, it seemed like WWE was already in the process of sabotaging the gimmick before it could take off . After all, much like with its’ “Broken” predecessor, it will take time for those who don’t get it (like I was in the impact days),but also requires more time than a short segment each week to get it going. This past week’s attack on Bray by Matt seems to be a step back in the right direction but only time will tell if we can continue to bathe in Matt’s “Woken Brillance” in the WWE, or if we should be chanting “Delete” at creative instead.

Want to chat wrestling or Broken Matt with me?  Tweet me at @cjcnov88 before you fade away and classify yourself as obsolete!