It may seem like Modern Warfare just released, but the devs at Infinity Ward are still hard at work. Coming in only two weeks after release, the latest patch for Call Of Duty has gives us two new maps and a fan favorite game mode. Shoot House finds itself in traditional multiplayer modes, while Krovnick Farmland is the larger Ground War map. Hardpoint also makes its return, which should be to the delight of Call Of Duty veterans.

The best part of all of this? It’s totally free! As part of the commitment Activision has made to the community, all future maps are free of charge. According to recent rumors and datamining, there could be as many as thirty-eight! 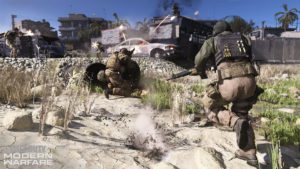 Visit the deserts of Urzikstan and enter a military training Shoot House facility; a tight, three-lane map packed with close-quarter combat potential. Medium-sized (perfect for 6v6 combat and a variety of game modes), expect tight corners that support a run-and-gun style of gameplay, along with a number of sight lines for medium-ranged engagements.

Once idyillic, the rural farm land of Verdansk has been pock-marked with evidence of military conflict, and the scars are visible across this Ground War map designed for battles on a massive scale. Compared to the previous maps of this size and scale, Krovnik Farmland provides a distinctly different atmosphere. Fight epic and frenetic Domination matches across a vast and undulating rural landscape, featuring farmhouses, windmills, silos, and other agricultural scenery.

Modern Warfare has sold ridiculously well since launch. Just the first weekend was the biggest opening for a Call Of Duty game this generation. We reviewed the story campaign, and are currently working on our multiplayer and Special Ops review. While you wait for the latter, check out the single player review here!

Call Of Duty: Modern Warfare is available now for PlayStation 4, Xbox One, and PC.