Ever since Call of Duty 4: Modern Warfare came out this franchise has had, arguably, the most popular multiplayer experience in gaming. I know it’s easy to sit back and make fun of Call of Duty for being an annual release. Everyone does it, even I’m guilty of indulging once in a while. But have you ever stopped to consider maybe there’s a reason so many people play CoD’s multiplayer? The Call of Duty Multiplayer is accessible to people of all skill levels. It incentivizes play with constant rewards and leveling up and encourages experimentation. There’s not one set up that can absolutely dominate every map. I know that this kind of multiplayer isn’t revolutionary anymore but I think people would do well to remember that Modern Warfare started it all. Cold War is like a lot of the previous Call of Duty games and that’s not a bad thing. As I said, people laugh because Call of Duty is an annual release, but… maybe you shouldn’t laugh at something being similar to a previous iteration. If it ain’t broke don’t fix it and Call of Duty’s multiplayer certainly isn’t broke. I haven’t played multiplayer in a CoD for some time, yet the multiplayer in Cold War was immediately exciting and fun. If annual releases mean a polished multiplayer experience, incredible visuals, and tons and tons of content and unlockables then, please, by all means, give me a Call of Duty every year! 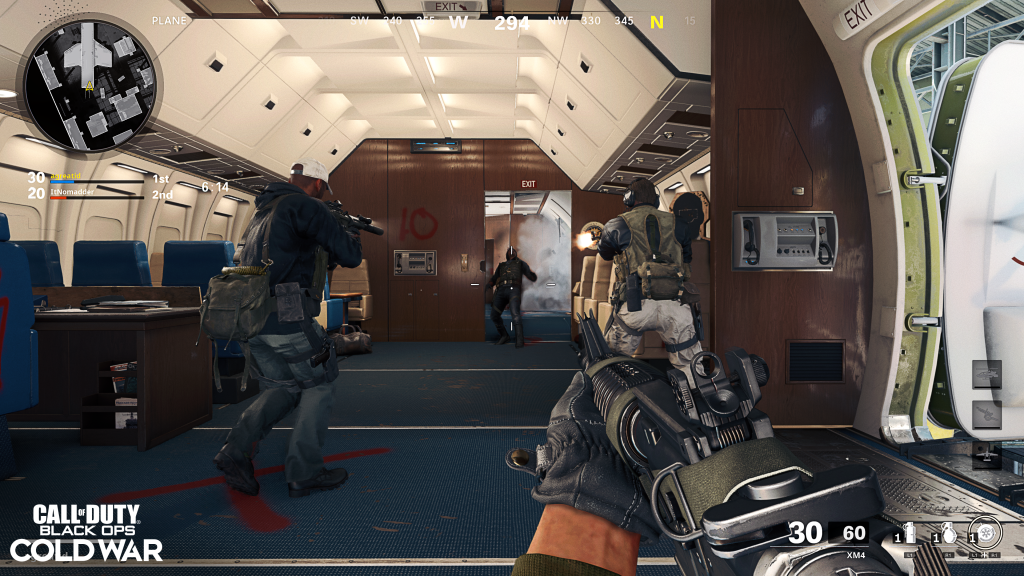 Cold War’s multiplayer will immediately be familiar to anyone who plays Call of Duty. All the modes you would expect are there including Team Deathmatch, domination, free for all, kill confirmed and others. One notable exception I really enjoyed from Modern Warfare was Gun Game though, so hopefully, it makes a return later on. There’s a little something for everyone in Call of Duty’s multiplayer, even including a more ‘hardcore’ mode that disables the minimap and changes things around to be a bit more intense. Whether you prefer straight-up shooting people or more objective based modes, whether you like free for all or team games you’ll find something to enjoy. There’s even a no respawn mode called VIP escort if that’s what you’re into. All of these modes can be played across Cold War’s 12 launch maps, and we can most certainly expect more maps to come as the year goes by.

Cold War constantly rewards you just for playing. You’ll earn XP no matter which mode you play in and this allows you to unlock guns, perks, etc. It’s not just your player level that goes up. Guns do as well, which unlocks attachments and skins. Each gun feels right, they’re fun to use and thanks to skins you can even put your own little twist on them. The customizability extends to vehicles too. You can change the looks of your boats and stuff which is a pretty neat touch. You’ll always be working towards something because Cold War’s multiplayer boasts hundreds of challenges to unlock fun calling cards and the like. From the easy boot camp challenges to the more mysterious dark ops ones, you’ll always be grinding for something. There are challenges across all the modes, as well, by the way. Meaning there are challenges for Zombies and Multiplayer.

Treyarch has changed the way leveling up works as well. As always you’ll level up to level 55 but the fun doesn’t end there. Like older Call of Duty games you can prestige. This resets your level and allows you to start all over again. Some people love it, some people hate it but it’s hard to argue with constant things to unlock. Once season 1 of Cold War’s battle pass hits on December 1st you can expect unified levels for Cold War, Warzone, and Modern Warfare. This is great because no matter which game you’re playing you’ll be working to improve your level. They’ll also introduce a prestige shop and more prestige levels. Prestige season levels are a new addition to Cold War and though they aren’t active yet they’ll allow players to level up all the way to 1000. You’ll also unlock prestige keys every 50 levels. 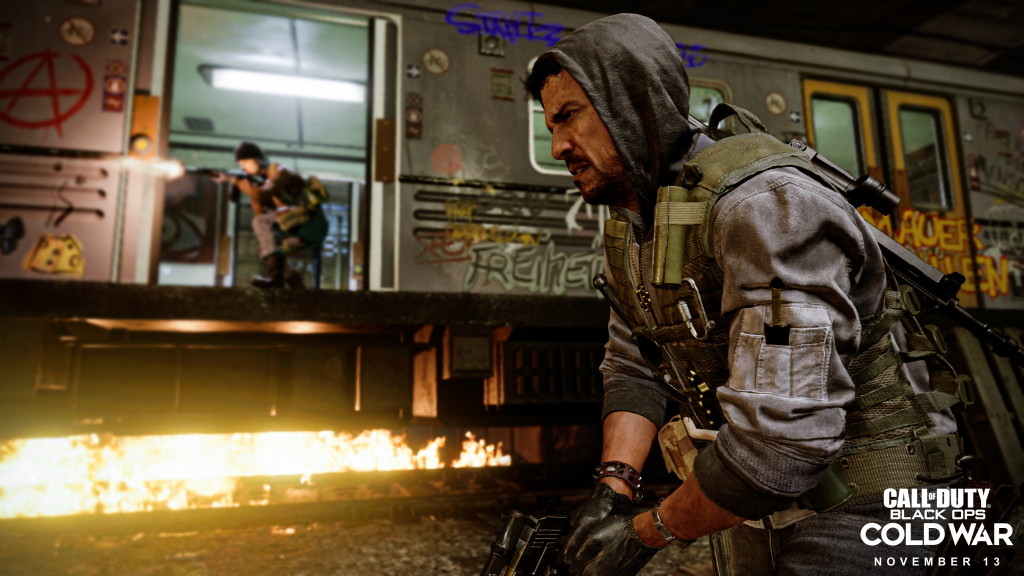 My point is there’s a stupid amount of stuff to do in Cold War.

It wouldn’t matter if it wasn’t fun though. Which it is! I’ve played several hours of Cold War’s multiplayer at this point. Not only does it run super well, I’ve never once encountered a glitch or anything like one, but it keeps you engaged. Getting into matches is super quick thanks to crossplay and communicating with players is easier than ever thanks to the Dualsense controller’s built in mic. That last perk is for PS5 players only, obviously. There’s a wide range of maps with varying climates and size so the game keeps changing it up. The variety stops you from getting bored and can help you come up with further loadouts to use.

I’m no CoD expert, but everything seemed fairly well-balanced. I never felt like anything was bullshit and most of my deaths were the result of my own stupidity. That was okay though, because I always had options to try and better myself or come up with something better. Changing a loadout or perk or maybe even a grenade type could make a world of difference. I became partial to the bow, myself, which was pretty awesome. It set stuff on fire and made me feel like the Green Arrow on steroids. 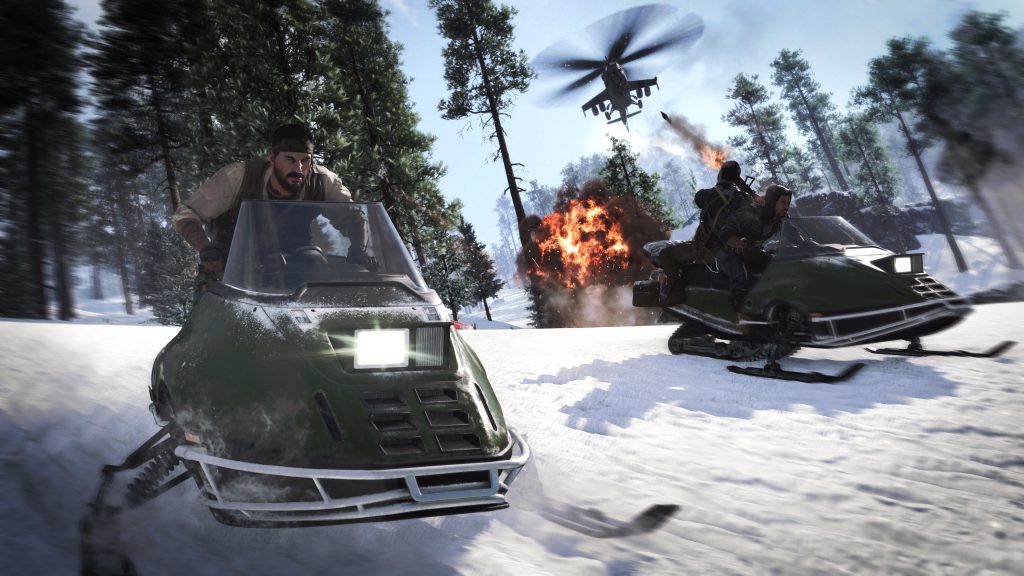 If you love Call of Duty the amount of content Treyarch is putting into this already endless timesink is sure to wow. Though I can’t speak about the seasonal stuff launching in December you can certainly expect me to check it out when it’s live. As for right now, however, Cold War is an easy pick to add to your collection. If you just got one of the new console’s and want to get your money’s worth you’re sure to find that here. Cold Wars has the potential to keep you entertained over the next year in full at minimum. And that’s before any of the additions Treyarch will be making.

Trust me. Grab Cold War, pick up a gun,and have some fun.

A huge thank you to our partners at Activison Blizzard and R&C PMK for providing us with a review code for this game. You can grab Call of Duty Black Ops: Cold War for $79.99 on PS4, Xbox One, and PC or for 89.99 on Xbox Series X and Playstation 5!