Call of Duty has always been a series about running and gunning, breaching with heavy duty firepower and letting the enemy know you are coming for them. Well, Treyarch decided to pull a fast one and we suddenly have two new multiplayer maps and a Zombies experience (if you purchased the season pass) alongside our free winter update!

Dubbed Operation Absolute Zero, the first free update for Call of Duty Black Ops 4 packs much more than the title intimates. The most prominent addition is a new operator known as, wouldn’t you know, Zero. Her special ability comprises of hacking into everyone’s systems in order to keep them from being able to use equipment and hinder killstreaks. In a game I personally was sabotaged by Zero and could not see where the enemies were coming from, even with a UAV present.

The second large addition is in Blackout mode. Hijacked, a location from Black Ops 2 has been added off the coast, allowing for a bunch of close quarters action as you fight to be the last man (or squad) standing. This ship map was always a favorite of mine, and though I do not know how it will fit in Blackout, I cannot wait to dive right to it. 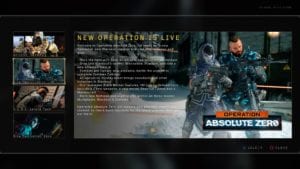 Other parts of this update include new gear, such as the ARAV in Blackout, a two-person vehicle with a turret and new weapons such as the Daemon 3XB and SWAT RFT. There will also be your usual host of winter themed outfits and such you can unlock if you play enough!

As for the paid content, your first two multiplayer maps are Elevation and Madagascar. Madagascar is themed after the island off of the coast of Africa and is pretty large. Elevation has plenty of buildings, similar to the Summit map, so there are a lot of places to hide. Most of the structures also follow Chinese architecture in design.

The final piece we will visit is arguably the biggest part of the update, the Zombies experience. We are already at five of these after the update which is around where most Call of Duty’s finish. Dead of the Night takes place in 1912 at a swanky estate which is (of course) overrun with zombies, werewolves, and vampires. The really impressive part of this map is the cast, which features Kiefer Sutherland, Helena Bonham Carter, Charles Dance, and Brian Blessed. This sounds like one crazy ride.

So which part of the update excites you? Are you more likely to buy the Black Ops pass now that the first batch of content has been revealed? Tell us in the comments below! Operation Absolute Zero launched first on Playstation December 11.