Cat Grant is coming back to Supergirl! But….as a recurring guest star.  She likes to stay close to home in Los Angeles so she will be commuting to Vancouver and will appear in multiple episodes beginning with the Oct. 10 season 2 premiere. The Brothers & Sisters and Ally McBeal alum will join production in Vancouver next week.

As Kara’s (Melissa Benoist) boss and media magnate Cat Grant, Flockhart was a series regular in the show’s first season on CBS. But when the super series moved to The CW, production moved from Los Angeles to Vancouver, raising the question of how much the L.A.-based actress would appear in season 2.

“Supergirl wouldn’t be Supergirl without the amazing Calista Flockhart as Cat Grant,” executive producer Andrew Kreisberg says. “We are so excited Calista has agreed to continue on the show when she can. We and the audience love to see her on screen.” 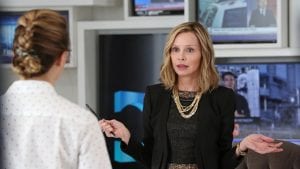