As the Nation continues to cope with the tragedy that occurred on Sunday morning in Orlando, FL, celebrities across the globe have shown an outpouring of support.   In the wake of the tragedy, some of Broadway’s brightest stars are joining together in an effort to do what they do best to help those impacted by these horrendous events. 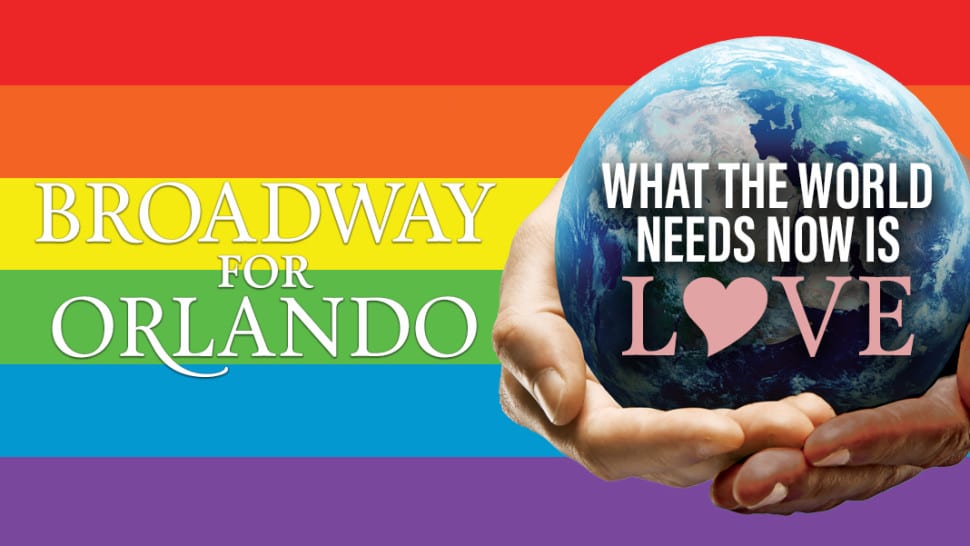 Named Broadway for Orlando, Lin-Manuel Miranda, Carole King, Sara Bareilles and a group of over 60 stars will be raising their voices in solidarity and support of the victims and those impacted by the worst mass shooting in United States history.  The group will be recording a single of Burt Bacharach’s What The World Needs Now Is Love which will be available for purchase through BroadwayRecords.com on June 20th and, shortly after, on iTunes.

100% of all proceeds from the sale of the song recording will benefit the LGBT Center of Central Florida.

“The Broadway community was so terribly shaken and devastated by the horrific tragedy in Orlando. Everyone wanted to do something as quickly as possible that would truly make a difference.  On Monday, my husband James woke me up at 7:30 AM and suggested we rally our friends and colleagues to do a ‘We Are the World’ type recording and raise money for the victims and their families. We started making calls and suddenly we had tons of theatre actors along with an orchestra and the services of a fully-staffed recording studio, all willing to donating their time and talent. Our community of artists has banded together as we always do to show we can end this cycle of violence and intolerance. Love WILL prevail!”

Playbill has also announced they will be releasing a music video of the recording sessions at a later date.

To receive an email notification when the song recording becomes available for purchase, you can sign up at BroadwayRecords.com.