Yesterday, news broke that Brie Larson had signed with Marvel for a seven film deal. The report stated that she signed to appear in multiple Marvel franchises in the MCU after her upcoming Captain Marvel film. The actress promptly took to twitter to clear the rumors up.

She replied to a post by MCU News & Tweets that reported the above news, saying “Counterpoint: this is not true”.

Counterpoint: this is not true https://t.co/aDlKZu8Rqo

The original link she responded to has now been deleted, but here is the original post with the article to which Larson responded. 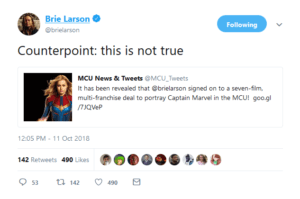 The reports claimed the actress would be earning $5 million for the Captain Marvel film because she signed this longer term deal.

The reports broke along with the news that Black Widow actress Scarlett Johansson scored a $15 million deal for the standalone Black Widow film. The film’s will take place before those of Avengers. As far as everything stands, that news is still true.

Johansson is now being compensated in the same league as what Chris Evans made on the Captain America films, and to what Chris Hemsworth make on the Thor films.

Larson has been involved on Twitter in the news happenings especially surrounding her character. Before the teaser and poster were revealed in September, she tweeted to Entertainment Weekly: “Hey @EW, I’m bored. Wanna break the internet tomorrow?”

You can see the trailer for Captain Marvel here.