Share
Pin
Tweet
It was announced today that the next Flash\Supergirl crossover will take place this March.

March 21st to be exact!  This episode will run in The Flash but, it all begins at the end of Supergirl’s episode the night before, just like the most recent CW superhero Crossover.

Our heroes will do battle with The Music Meister.  Who is this? Glad you asked! 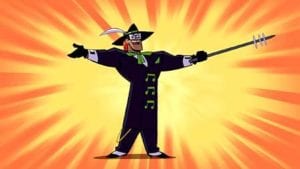 He claims he was bullied as a child because he sang in choir. But he soon discovered that when he sang higher that he could hypnotize people.
He thus uses his newly discovered talents to control the people that had bullied him and plans to “settle the score.”

As he sang during his first song, “Bullies used to pick on me because I sang in choir, but something very strange occurred as I kept singing higher, the ruffians around me quickly fell into a trance, and it was then with wicked glee I made those puppets dance.”
The Meister’s main power is his singing voice, which creates a pitch so high that it hypnotizes people. In their state of hypnosis, it causes his victims to sing and dance too. He has a rod (roughly shaped like a conductor’s baton) that can fire energy blasts shaped like music scores. He is also seen riding on a motorcycle shaped like a paired eighth notes; at one point, the cycle splits into a pair of Segway-like scooters, now resembling separate notes (he and Batman race across telephone wires, like notes in the song being sung during the chase).

He also seems to have the uncanny ability to change his outfits befitting different eras in music history extremely quickly, such as Cab Calloway’s zoot suit and Elvis’s disco suit. 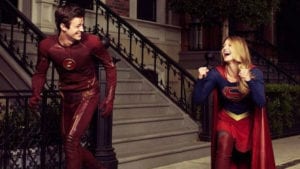 Who will be singing in the crossover?

Executive producer Greg Berlanti confirmed the news at the 2017 Winter TCA Press Tour. No casting for the Meister has been revealed at this time.

“When we get to the musical episode, both Barry and Kara will find themselves at pivotal crossroads on their respective series, and the experience of going through the musical will have a great impact on both series going forward,” EP Andrew Kreisberg told reporters. “We’re still writing the script and trying to figure out exactly what we’re going to do.”

Who do you think should be cast as the Music Meister?  Leave some comments below!

Supergirl returns with new episodes Monday, Jan. 23rd. The Flash returns Jan 24th both at 8 pm on The CW.

Home » Fandom » Breaking: The Next Flash\Supergirl Crossover Gets An Air Date