There was a time Geeklings when MTV used to actually air musical content. Who would have thought that a channel, with the word music in it’s title, would ever be questioned about it’s musical content. Now a days MTV is that channel that gives you Teen Wolf or Scream with a water downed version of a music award show some where in between(how do you expect this to be good if you don’t actually air any of the music?). Granted, the music video is a dying, if not dead medium, that has shifted to the online audience. Since music has become so commercial over the years, there are plenty of other agencies doing the job that was once required from music videos. Now artists do them pretty much for the love of the game or for you millennials who spend countless hours on You Tube. Yet, there was a time when musical content poured from the television screen when MTV was on.

It wasn’t just musical content but musical content that pertained to the generation that was watching it. Music videos had children of the 90’s in their sights and we ate that stuff up like candy. Videos to Black Hole Sun, Give It Away, Got Caught Stealing, Amazing, and Smells Like Teen Spirit are so burnt into the visual receptacles of my memory that I could almost describe them scene for scene. But MTV was more then music videos and it’s collection of live music was always something pretty special to behold. There were the musical performances during the awards show where stuff like Pearl Jam and Neil Young playing “Animal” and “Rocking In the Free World” together was larger than life or Nirvana starting off with “Rape Me” before slipping into “Lithium” which famously included bassist Krist Novoselic catching his bass with his face. There were spring break performances like Bush playing “Glycerine” in the rain. I would stay up and watch these song performed over and over again unable to get enough of them. Being at such a young and impressionable age allowed MTV to usher in the importance of live music to y mteenage heart, and there was nothing more important than MTV’s Unplugged.

Yes the music awards and the Spring Breaks brought about some really cool performances of songs that were hits at the moment but there was instantly something special in Unplugged. I was never able to grow my hair out long like Kurt Cobain, which doesn’t mean I didn’t try, it’s just my hair is naturally curly and thick and looked… well, it looked awful. Yet, my lack of long hair didn’t stop me from getting into the alternative/grunge movement. If songs didn’t have a shit ton of distortion in them or screaming vocals then I didn’t pay much attention to it (at the time). I wanted my music loud and violent and crashing all around me. Rage Against the Machine, Rancid, Pearl Jam, Smashing Pumpkins, and Green Day were staples in my changing disc CD player (I had a five disc changer and it was amazing). Unplugged took these artists and their songs and allowed me to understand that music didn’t have to be aggressive all the time. That if you actually stripped down these songs that there was even more there. Or in some cases (*ahem* “Layla *ahem*) it was an opportunity for an artist to reconstruct a song. Either way it was like hearing a song and getting twice the music out of it. Which could be the greatest gift ever. 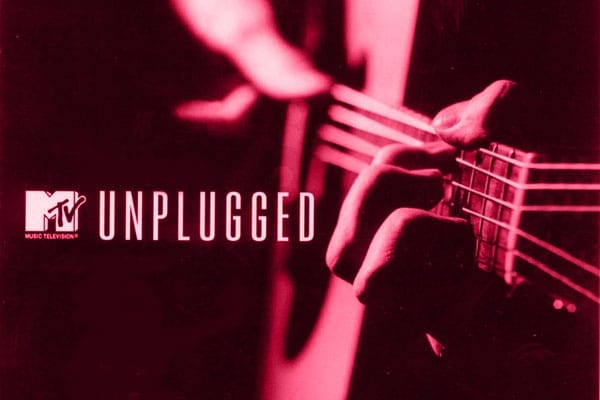 Over the years there have been tons of memorable performances on the Unplugged stage. A stage that didn’t just pigeon hole itself in grunge music. All types of artists have graced the stage and given incredible performances leaving their mark. In some ways Unplugged helped introduce me to artists like Bruce Springsteen (who gave the first ever plugged Unplugged performance) or Eric Clapton (whose blusey version of “Layla” is one of the greatest things to ever come out of the series) while expanding that stage to rappers like LL Cool J (whose version of “Mama Said Knock You Out” might be the loudest acoustic song I’ve ever heard. Not to mention possibly the only time anyone sang/rapped on Unplugged without a shirt). I’m not ashamed to admit that I enjoyed Rod Stewart’s stint on Unplugged (come on, “Havin’ a Party” is a blast! And I’ve secretly always wanted to look that cool in a white dress shirt) or that I would secretly borrow my parents CD of 10, 000 Manics’s set. Unplugged helped to expand my musical horizon and when I got older, and more appreciative of music in general, gave me a foundation to build off of. I could get into Derrick and the Dominos or Faces because of the music I heard first through Unplugged.

That’s not to say that my generation wasn’t represented, and represented strongly. For me, there are three Unplugged performances that encompass everything I loved about the series, and this could be because they were bands I was listening to as a young, impressionable teen or maybe because of how iconic they were in nature. The reason isn’t important but the music is. I still listen to one of these albums at least once every couple of months just to revisit the feels. As I’ve gotten older and learned more about music my appreciation for them has changed, but they never fail to bring me back to a time where I unsuccessfully tried to grow my hair out long.

I’ll start with Alice In Chains, who I believe kind of get lost in the Unplugged shuffle. This is hands down one of the best Unplugged shows that MTV ever put together. From the look of the stage (all those candles) to the intimate sound of the band, this is one of those flawless shows that deserves to be celebrated. I’ll be honest as a teenager this show got lost in the shuffle for me but it wasn’t until I was older, with my ipod on shuffle, hearing “Nutshell”, that I was reminded just how incredible this show was. These songs are eerie and haunting with their vocals while being hypnotic and entrancing with their sound. This is one of those shows that begs you to put it on with a glass of wine and special guests. The chill factor is high and you can easily get swept away in the sound of Layne Staley’s vocals. Stand Out Song: “Rooster”

Next on my favorites of Unplugged list is Pearl Jam. I won’t get into it too much today but Pearl Jam is the end all be all of music for me. Using a term like favorite band seems to sell the love I have for them short. Needless to say I found that this show has been sort of elusive as catching a replay of it was like striking gold. There was a brief period of time where I thought that maybe the show didn’t exist and I had just dreamed it. Luckily that’s not the case. Pearl Jam Unplugged is filled with angst and raw vocals with a band that was just begging to explode. It also marks the first time I remember seeing Eddie Vedder take a political stance (writing Pro Choice on his arm during “Porch”). This is an explosive Unplugged filled with long hair and stupid looking hats, but demands to be listened to. While it was never released as an album (cause apparently the music gods hate me) you can find a DVD of it attached to the anniversary release of Ten or just You Tube it. Stand Out Song: “Black” 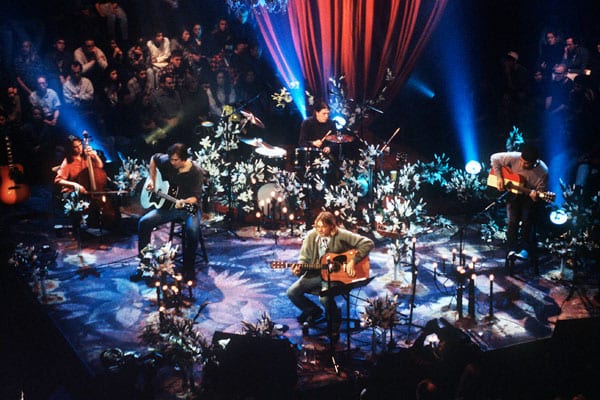 Then there’s the most iconic Unplugged ever. The one everyone thinks of when they hear the name. Nirvana. Nirvana Unplugged was an
album that I have listened to more times then I can remember and opened the door to understanding the vulnerability of Kurt Cobain. Where Pearl Jam Unplugged exploded with angst and tension, Nirvana provided a show that was clouded in pain and tender vocals. And yes, it being one of the last times Kurt Cobain performed live probably helps with that perception, you can’t take away the rawness in his vocals. It’s there despite what happened to him. Everything about this show not only shouted special but iconic. From that sweater all the way down to Pat Smear’s guitar, this show was memorable. There is not one child of the 90’s who can listen to that version of “All Apologies” and not be called back to that moment where they heard Kurt had died. This Unplugged has stayed with me for years and stands the test of time. One could argue that it put Unplugged on the map, and maybe they’re right. If there was ever a catalyst of why Unplugged was great it was the Nirvana show.

While the landscape of music has changed since I was a teenager the need for acoustic music has not, and I’m happy to hear that MTV is looking to bring back the Unplugged series. Maybe a new generation of kids can be introduced to stripped down music like I was, and maybe it can open the doors for them like it did me. One could hope that this new version of Unplugged could help remind this generation that music is supposed to have soul and meaning and not just be throw away bubble gum pop.

Before I leave, you’ve probably noticed that I didn’t give a stand out song for Nirvana Unplugged, and that’s because I’d rather leave the audio/video for you guys to consume. This is one of my all time favorite songs and probably the rawest vocal I’ve ever heard (just wait for the sigh). This is what makes me love music in every shape and form, and I still get chills/tears every time I hear it. This is my formidable years in music form. Enjoy Geeklings, see you next week!

Stand Out Song: “Where Did You Sleep Last Night”

Images and video from MTV