Yesterday I was driving to work with my ipod on shuffle which is like Russian Roulette with music. Seriously Geeklings, my ipod is an episode of Hoarders waiting to happen. As it so happens the third song to come on was “Gimmie the Loot” off of Biggie’s Ready to Die. As I was sitting in traffic with my windows cracked and the music louder then a thirty-four year old male should be admitting to, I started thinking about that album. It had been years since I sat there and listened to it in full. Don’t get me wrong, tracks like “The What” and “Warning” have been constant rotations in any of my “right now” playlists, but the Ready to Die album? I couldn’t remember the last time I listened to it cover to cover. What has proceed over the last day and half has been the listening to it and nothing else. It was one of those instant trips down nostalgia lane where I was a high school athlete listening to “Maching Gun Funk” to get myself pumped for a big race. 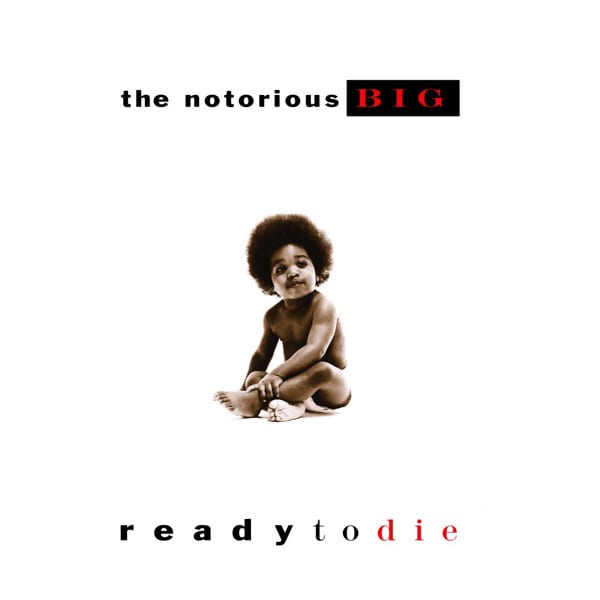 As I sat in my car while my speakers filled with Biggie’s unmistakable cadence flowing through my ear holes I started to travel back further in time to a place where I owned the actual Ready to Die album. I remember holding it in my hands with that album cover with the kid and his giant fro. I remember the weight of it, how my parents wouldn’t approve of that lyrical content, and how in the far right corner there was a blue sticker (right by the parental advisory one. I made sure those albums wore that black and white sticker like a badge of honor) with the words “Lifetime Music Gurantee”, and suddenly I was sad.

Do any of you remember the last time you actually bought an album? Not something you downloaded off of itunes. I mean a psychical copy of an album. With lyrics sheet and thank you notes, a disc, and that feel that you were holding something important in your hands. Music so tangible that you could actually freakin’ feel it. The pulse within the disc just begging to be put in your stereo so it could flow out of your speakers. As I sat in my car with Ready to Die, probably playing a bit too loudly for traffic, I reflected on physical copies of albums… and that blue sticker.

You see Geeklings, there used to be this music store called The Wall, which if we’re being honest is a fantastic name for a music store. The Wall had this great policy to overcome their costly CD prices which was this blue sticker that read “Lifetime Music Guarantee”. This was a promise that The Wall didn’t take lightly. All you had to do was peel that sticker off, place it any where on the album cover, and wait to see if anything ever happened to your disc. Did it get scratched to the point of no longer being able to play? Or maybe you spilled some Big Gulp on it? Well, bring it down to The Wall with that sticker and they’ll give you a brand new one. A brand new album no questions asked. That sticker spoke volumes. 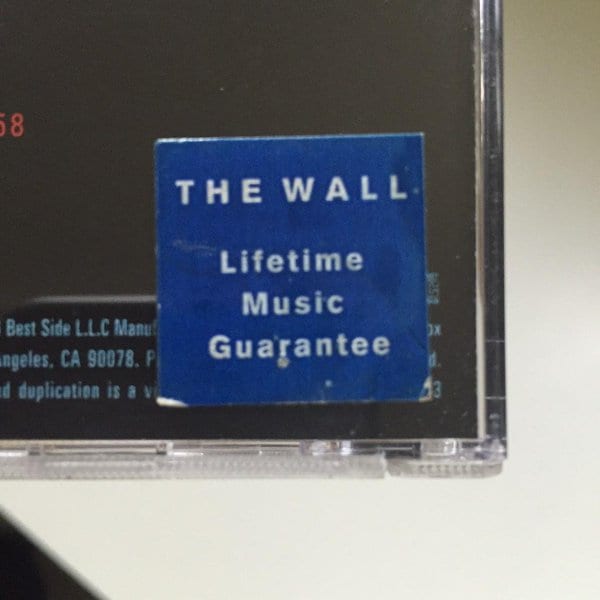 There was no worse feeling then putting on an album and listening to it skip. All you wanted to do was listen to Rancid …And Out Come the Woods and every time “Olympia WA” came on your CD acted as if it was going into seizure. All of a sudden that album becomes useless and you learn not to listen to it anymore because it just doesn’t play. And there goes a possible connection between a person and a band. Just because of a couple of scratches. The Wall was there to prevent that. The Wall wanted to save your music and not let it fall to the side because your copy of Will Smith’s Big Willie Style was too busy getting “jiggy with it” to play. That’s not just a music store Geeklings, that’s like the best friend ever.

Also think about how easy it was to fool the establishment. I only say this because The Wall doesn’t exist anymore and I’m pretty there are few people from the 90’s who didn’t do this, but if you happened to buy your CD from a store that wasn’t The Wall… well just change the cases with an album you did buy at The Wall (and had that blue sticker) and boom. Album saved. I’m sure the people at The Wall were privy to what was happening but it still felt like you were sticking it to the man. It was the little things.

As traffic started to pick up and Biggie started rapping about it all being a dream, I allowed my mind to travel back to the present and reminisce about how sad it is that physical albums don’t exist anymore. There was a time where I was so proud of my CD collection (it’s still a source of pride). Long trips were the best/worse trying to figure out what albums to bring. I grew up in a time where an album was still important, and if you wanted just one song then you had to buy all of them. Who knew, maybe you would fall in love with all of them. Or maybe you would use that purchase when your favorite CD was scratched and you needed to slip cases. I tried to put off the downloading of albums for the longest time (my first fully downloaded album was the soundtrack to season three of Lost. I am so not lying) but it’s just so convenient. You want to listen to Appetite for Destruction right now aaaaaand two seconds later it’s on your ipod. It’s great and it’s magical but there was something alive about holding an album in your hands. Knowing it was there and ready to start playing. Those were the days. The days where CD stores would give you stickers because they wanted you to cherish your music and know that it would always be there for you. The days where there was a deeper appreciation for the sounds that left your speakers. The days where that blue sticker was your closest friend sometimes. I miss those days…

Home » Movies » Breaking Out the Flannels: The Blue Sticker