Could Brad Pitt and Emily Ratajkowski be the next great Hollywood couple? The sources say no, but they’ve been seen out a few times together. Even though the Oscar winner (Pitt) is 58 and model Ratajkowski is 31, they’re both going through divorces so neither one wants to get too serious just yet.

The Hollywood Insider addressed rumors that Pitt and Ratajkowski have been “secretly dating,” despite the frequency of these allegations. “People have been speculating about this for a while. Brad is not dating anybody,” they explained. “They [Pitt and Ratajkowski] have been seen a couple times together.” The source noted that Pitt has also “been seen with other people” recently but clarified that he is still single. Though the insider ended on a cryptic note, telling readers to “Stay tuned.” 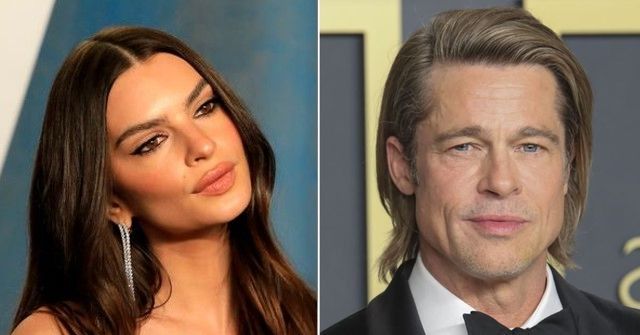 Pitt is still in the middle of his divorce from Angelina Jolie, and Ratajkowski just filed for divorce from Sebastian Bear-McClard this month. There were allegations that Bear-McCLard cheated on her back in July, which led to their split. Ratajkowski has yet to speak publicly about why they’re divorcing, but she did have something to say about Adam Levine’s DM cheating scandal last week.

In a video response to a TikTok arguing that “the other woman” is just as responsible for a man’s cheating, Ratajkowski said: “I’m going to try not to go the f-off right now,”
“I just couldn’t disagree more I’m not sure why we keep blaming women for men’s errors, especially when you’re talking about 20-something-year-old women dealing with guys in positions of authority who are twice their age.”

The power dynamic is so skewed It’s outrageous- like it takes advantage of people, it’s controlling, I can’t fathom. I just do not agree If you’re in a relationship, it’s your responsibility to be faithful to your partner.”

“That’s why the rest of the women are to blame. It’s horrible, and it was specifically created to keep women apart,” she adds.

“I think a huge problem in our culture right now is we just say, ‘Oh, men are monsters. They’re terrible. They’re horrible,'” Ratajkowski said in another video. “We don’t hold them accountable and then we blame other women. We ask women to adjust their behavior instead of just saying men need to change their behavior. It’s sexism. It’s classic misogyny, period.”