When Danielle Fishel was just 12 years old, she landed the role of Topanga Lawrence in the ABC sitcom Boy Meets World. She starred in the show from 1993-2000.

The actor reprised her role in the 2014 sequel series Girl Meets World. Earlier this year, she started a podcast with two of her former costars about the ’90s show.

Together, Danielle, Rider Strong, and Will Friedle cohost a series called Pod Meets World. They talk about their time on Boy Meets World and how it affected them as child stars.

In this week’s installment, the actors took part in a fan Q&A, where they answered some frequently asked questions about their lives and the sitcom, which included a query about who used to receive the most fan mail.

The trio immediately agreed that Rider proved to be the most popular with viewers. Rider joined the show at the age of 14 and played main character Cory Matthews’s best friend, Shawn Hunter.

Rider said that by the “third or fourth” season of the show, he started to receive a lot of letters from fans. This made him feel uncomfortable because he was worried about not being able to reply to them all. 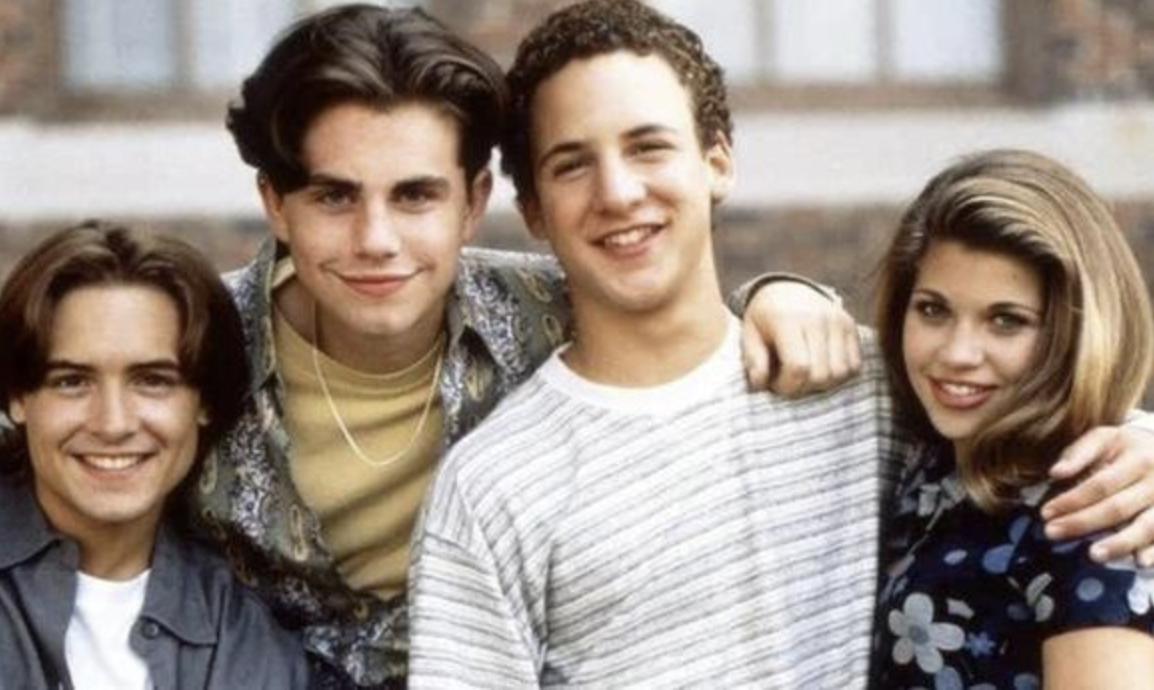 Danielle then shared her experience with fan mail which happened shortly after she joined the show and when she was still a preteen.

The actress revealed that a grown man wrote to her pretending to be a young girl. Once they had established regular correspondence, he started to show up at her school and tell people that he was there to pick her up.

“When we first started getting fan mail, I also read them all and responded to them all. I got a letter in ’93 from a young girl and she included pictures of herself in it, and she was in gymnastics,” Danielle said, having previously explained that she took part in gymnastics before becoming an actor.

“She wrote me this handwritten letter that she was a fan, and I wrote her back and she sent me another letter and we started this correspondence back and forth,” she went on. “I felt very close to her, and one of the things she talked about regularly was that both of her parents died when she was young and she lived with her older brother.”

Danielle said that in the second letter she received, the girl included pictures of her brother who was “several years older” and a “good-looking guy.” She also said that the girl would repeatedly say that she didn’t know what she’d do without her brother, as she doesn’t have parents. Then, the girl included her phone number in one of the letters so that Danielle could call her.

“My mom is participating in me writing back,” Danielle clarified. “She’s reading all these letters as well and she’s aware of what I’m writing and she’s reading what this girl is writing to me, and my mom is like: ‘[It seems like] you would be friends.’”

“So I call her,” Danielle went on. “And I get her voicemail, but it’s not her. It’s her brother’s voicemail because it’s his house. They live in an apartment together, but her name isn’t anywhere on the voicemail.”

At this point in Danielle’s retelling, the penny dropped and Rider exclaimed: “She doesn’t exist! She doesn’t exist — some guy pretending to be a girl, you got catfished!”

Danielle confirmed that this is exactly what happened, and explained: “The way it all came out is because I kept calling her, and I left my phone number and she wouldn’t call me back. Then we got a letter from her brother saying that she had died, and my mum woke up in the middle of the night and was like: ‘She never existed, it’s always been him!’”

“And then he started showing up at my school and telling people he was there to pick me up,” Danielle told her shocked costars, with Rider calling the entire thing Danielle’s “first stalker experience.”

The actor did not go into detail about how the situation ended. Rider then shared his experience of not knowing how to have a clear boundary between himself and his fans when he was a teenager.

“I had girls calling my house when I was like 11, 12, because I was listed in the phone book — or my parents were, in my hometown,” Rider shared. “Back then, I would meet up with them. This was before Boy Meets World, this is when I was on Home Improvement or I had done local plays.”

He added: “Girls would call the house and I’d meet them at an arcade, super awkward. At the time I was like, oh you like me, you saw me on TV, OK I’ll be your friend, let’s hang out, maybe I’ll have a crush on you too! In retrospect, it’s like, no, you have to create boundaries.”

Rider said that he only learned how to correctly interact with fans after he saw how his Boy Meets World costar, Ben Savage, handled being recognized when they were out together. Ben had been “so confident and gracious and thankful” while signing autographs.

“At that point, if I got recognized I’d be like oh my god, you know me from my TV show, that’s so cool! What’s your name, do you want to go and hang out?” Rider laughed. “It’s not a chance for you to freak out too.”

The cast of the podcast has talked about the more difficult parts of being a child actor before. They talked about uncomfortable kissing scenes and how the show’s creator humiliated Danielle on her first day.

Will and Rider said that they had a different background actor to kiss each week during their time on the show. Both of their characters were the heartthrobs of the sitcom.

“It was hugely uncomfortable. Everyone talks like, ‘Oh man, you get to kiss all those girls!’ But it’s not as awesome as you might think it is,” Will said. “It really is horribly uncomfortable, and to do it in front of an audience and hearing people go ‘woo’ and all this…”

“We should at least address, especially in this day and age it needs to be talked about, the kind of power disparity that’s going on,” he added. “Because we’re regulars on the show so we have a job and we know we’re going to have a job, and it puts the [guest] actor in a position of saying: ‘I’m not gonna say I don’t want you to put your tongue down my throat.’”

Rider agreed and admitted that they all would have benefitted from having someone who helps with intimacy on set with them, something that simply didn’t exist in the ’90s.

“I totally think that it’s a necessary role because you can’t just trust that a director or a producer is going to have the experience or the delicate tone that is required of that situation,” he said.

The group also admitted that they felt as though they couldn’t say no to situations that they weren’t comfortable with on set, with Danielle saying: “We were actors, it didn’t matter whether or not we were uncomfortable or comfortable with it. Whatever the writer wrote is what you did, and you were made to feel that if something did make you uncomfortable, it was inappropriate for you to express that.”

In a separate episode, Danielle said that she had trouble performing in her first rehearsal at the age of 12 because the showrunner threatened to fire her.

Her recollection infuriated that week’s podcast guest, director David Trainer, who had worked on the show. He responded at the time: “There’s many wonderful things about [Michael Jacobs], but there’s hateful things. This is one. To hear this, you’re sweating? I’m really pissed. It’s enough to make me want to sign off of this podcast. I don’t want to be associated with anything that guy is associated with. This is just not how you do things. I’m glad it became a hit, but this is disgusting.”

Danielle also talked about the big difference in how much she gets paid compared to her male costars. Her agent and father made her boycott a table read until she got paid more.

In a previous podcast episode, Danielle, Will, and Rider talked about their experiences with racism on set. They also confirmed that their former costar Trina McGee will be appearing on the show soon.