A missing photo casts a shadow on the Borders conviction investigation.

Bosch Episode 506: ‘The Space Between the Stars’

Hector remains hot on the trail of the players in the pursuit of Border’s release from prison. Rita shows a different side of herself and Harry commits to the Dominic Reilly alias no matter where it takes him. Jerry reaches out to his old neighborhood for intel on Gary’s murder.

Crate and Barrel make a suspicious discovery while on duty in CAPs. Tom continues to pursue Maddie while the Chief pursues the truth about the Vasquez shooting. Jimmy’s team makes a toxic discovery.

But it doesn’t feel so good. Rita visits husband Preston Borders at San Quentin. She is sporting a more relaxed look with her hair down and leg showing through the slit in her skirt. Even her voice sounds different, more confident, more alluring.

Preston is concerned that Harry said he has Rita on tape and tells her she messed up by talking to “that biker” (Hector). Rita apologizes and tries to distract Preston with her seductive charms, but Borders resists his wife’s flirtations.

Borders insists that Rita get in touch with attorney Cronyn in person to figure out what is going on. Borders leaves the visitation area.

Hector is doing a lot of surveillance from afar in this episode. He is tracking Rita’s whereabouts and finding out more about Terry Spencer who handled the evidence consolidation for the Skyler murder.

Hector reports to Honey and Harry that Spencer is in deep financial trouble with a balloon payment due on his mortgage very soon.

They're behind Bosch every step of the way. #BoschAmazon returns April 19. pic.twitter.com/dvTSlbxWs0

We get a snippet of Hector’s backstory when Honey tells Bosch that she helped overturn his wrongful manslaughter conviction years ago. Honey also makes a point to tell Harry that she would be keen on having him work alongside Hector whenever he gives up the LAPD.

As they try to figure out how Terry is connected to Cronyn, Bosch pulls out a flip phone. Honey makes a comment about him being “old school”. Harry tells her the phone belongs to someone else, a vet named Reilly. Clever, indeed it does!

Even more clever is the phone call Harry makes to Lance Cronyn’s office. He claims to be Terry Spencer and asks for Cronyn, saying it is urgent. Cronyn gets on the line and reminds the caller that he is not their point of contact. Harry hangs up confirming that Terry is involved somehow with Cronyn.

Hector later sees Rita meeting with a woman. Hector snaps photos and sends them to Harry who recognizes her as “Kathy” who was at the courthouse with Cronyn when Bosch confronted the attorney. Hector will follow Kathy and get more information for Bosch. It turns out that Kathy is a real estate lawyer who was Lance Cronyn’s former mistress, now wife.

While Hector speaks to the front desk to find out more about Kathy, she meets with Lance upstairs. We see the pair discussing Rita’s revelation that Bosch claims he has her on tape. Kathy asks Lance if that is possible. They also talk about Terry Spencer and decide they need to stash him somewhere for the time being confirming again that Terry is connected to their plan.

We later see Kathy talking to Terry Spencer telling him she will relocate him to one of the Cronyn properties until the habeas hearing is over. He insists he did not telephone Cronyn and claims someone was pretending to be him.

Bob tries to be reasonable

Christina Henry is working any angle she can to bury Bosch’s career. She meets with Bob from Newton Division to examine the search warrant package for Borders’ apartment 22 years ago. Bob seems to be a little sweet on Christina and casually asks her out. She brushes him off saying she cares about him “like a brother”.

They review the interview questions about the pendant and how Danielle’s family said it was missing. Bob takes the opportunity to point out that it would be the police department who would be at fault if the pendant was handled incorrectly, not necessarily Bosch. He does agree, however, that Bosch should have taken her side on the personal matter of her career. Christina clearly wants retribution and talks about “payback”.

Is it just me, or is she really jeopardizing the integrity of this investigation with a personal vendetta?

Crate and Barrel continue plowing their way through their CAPs assignment. Crate calls Barrel over to take a look at some suspicious data on the Crime Clearance Report. It appears that someone is “juking the stats” or downplaying the severity of crimes by using less severe language in the descriptions.

The duo shares the sketchy reporting with Billets who is both concerned and surprised. She was interim Captain during some of the time that the reports were being altered. She tells Mankiewicz she wants copies of all the reports. She is not inclined to be a whistle blower but wants to have the evidence in order.

Harry, like Christina before him, reviews the search warrant package from Borders’ apartment. He carefully matches the “Before” and “After” photos from the search room by room. He finds that one of the before photos from the bedroom has no match. You can clearly see the seahorse pendant hanging on the dresser in the after photo, but what did it look like before?

Harry returns the package and learns that both Christina Henry and the Chief’s right hand man Wash had also recently checked out the package. Bosch goes to talk to Chief Irving about the missing photo.

The Chief reminds Harry that city files are not completely secure. Harry counters with a discussion of Borders’ detainment prior to his arrest for murder. Bosch points out that if anyone searched Borders’ personal belongings that night, like his backpack, anything found would not be admissible in court. Truths are left unsaid.

Watch the new season of @BoschAmazon on @PrimeVideo on Friday! pic.twitter.com/VmrEEWPzPT

Harry comes in the house from outside where he was able to get sufficiently sweaty and stinky for his undercover gig. He has received the call from the clinic about his first quid pro quo assignment. As he prepares to leave, Maddie assures him that he has the odor of undercover. She also reminds him that he is the only family she now has. He knows. He tells her that it will be a quick assignment and that he will see her that night.

Jerry reaches out to his old neighborhood

Before changing clothes to drive Harry to the Garcia Pain Clinic, J. Edgar checks in with RHD Detective Espinosa about any progress on the Gary Wise murder. Espinosa reveals that they found a gun at the scene that had been taken in a drug bust in 2013. The gun was supposed to have been melted down.

Espinosa also explains that her team is not getting much information from the neighborhood. Having grown up there, Jerry offers to reach out to the neighbors.

Jerry approaches a woman named Miss Johnson and tells her that his family use to buy her mother’s bread. They reminisce and he reveals that he is a detective. Jerry asks about Gary’s murder. Miss Johnson says she did not see anyone get shot, but she heard the gunfire. She also saw an African-American man run past looking very fearful. 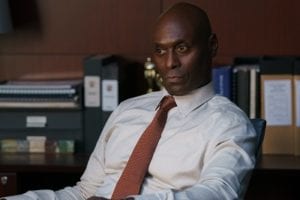 Chief Irving gets intel from Captain Sarah McCurdy who helped him last season with social media information about Desiree Zealy. This time around, McCurdy has investigated Officer Robson’s history with Miguel Vasquez who was killed in the OIS.

She has video of Robson accosting Vasquez in August 2016 for shooting fireworks. Vasquez mentions that he recognizes Robson because the officer had given him a hard time on Cinco de May. Robson pushes Vasquez to the ground. Then there is a gap in the video before seeing Vasquez detained on the sidewalk.

McCurdy cannot confirm if the video gap was on purpose or a problem with the recording equipment. As far as footage from the Cinco de Mayo incident, there is none because the technology was not yet in place.

Chief Irving later meets with Officer Robson about any history he had with the Miguel Vasquez before shooting him. Robson says he looked familiar but the evening was chaotic and he was fearful for his life. Chief Irving is troubled by Robson’s reference to the night as a “war zone”.

A change of plan (er, plane) for Dominic Reilly

Harry and J. Edgar secure Rene Davila from Vice to watch the perimeter while “Reilly” engages with the group at the Garcia Pain Clinic. J. Edgar will be the point person on surveillance. The signal is “Hold Fast” should anything go awry.

Reilly gets on the van which makes its first stop at a pharmacy. As the shills are re-boarding the van, the driver named Stones (who was also the other killer of Jose Esquivel, Sr.) looks concerned. Reilly sees Stones watching one of the surveillance vehicles and inquires what’s wrong. Reilly offers a way to get rid of them and calls 911 saying there is an officer down near “Hold Fast” Pizza. J. Edgar and Davila move out based on Bosch using the signal.

The van drives past the Garcia Pain Clinic and Reilly tells Stones he missed the turn. J. Edgar and Davila are surprised as well, but Jerry believes he knows where the van is going. Sure enough, we see the Twin Otter plane flying out of Whiteman Airport and Jerry looks very concerned. It does not look like Bosch will be back to see Maddie tonight.

#HoldFast (I’m not saying anything is wrong!)

Keep your eyes peeled for the investigation of Bosch episode 507.

Home » Uncategorized » ‘BOSCH’: Investigating episode 506 ‘The Space Between the Stars’