‘Sup readers? Welcome to another edition of Book BFFS, the sole purpose of which is to match you up with books based on stuff you’ve read/enjoyed before. This one is going to be a bit of a curveball, because this week’s “mission,” was to find a BFF for a book that I didn’t like. Why am I doing this to myself, you ask? Well, there are two reasons:

1) I can recognize when my opinion is the unpopular one, Follow Me Down clearly has a lot of fans. I thought I would be counted among them just because it’s hard for me to find a thriller I don’t get along with. Luckily, Follow Me Down is also firmly snuggled into a certain niche of thriller: told by an unreliable narrator and/or girl/woman with an angelic public facade goes missing and/or is found dead.

2) It turns out that one of my friends is besotted with this book. Over girls’ night dinner, she asked if I had any recommendations based on it. While I told her I didn’t personally get as much out of the book as she had, I also suggested something she might like that I did enjoy.

So, first of all, if you haven’t read my review for Follow Me Down (linked above), just know this: our protagonist, Mia Haas, returns to her Podunk North Dakota town after a call from police. She learns her brother, a formerly-revered high school teacher, has probably been seducing one of his students— and that student has been found dead, while Mia’s brother is nowhere to be found. Mia knows her brother, knows his innocence, on a purely intrinsic level, and so she sets out to prove him the good man she knows he has always been.

What you should read next: 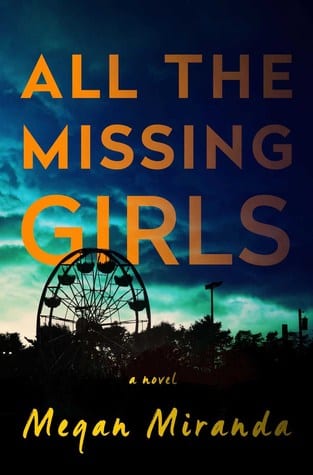 If you liked Sherri Smith’s Follow Me Down (it’s okay. I swear, we can still be friends), you should check out Megan Miranda’s All The Missing Girls. All The Missing Girls follows Nicolette— “Nic”— Farrell. When Nic was a teenager, her best friend, Corinne Prescott, went missing. No one has been able to close her case, for lack of evidence as to what definitively happened to Corinne. Was she kidnapped? Is she alive? Where did she go? Does anyone in town know what happened to her? Initially, Nic, her boyfriend Tyler, her brother Daniel, and Corinne’s boyfriend Jackson are all suspected of foul play involving Corinne. Though they’re all eventually cleared, in part thanks to an eye-witness alibi provided by Annaleise Carter,  the stain of Corinne’s disappearance lingers on all of them, especially Jackson, and especially in their small, rural town.

Fast-forward ten years: Nic has left Cooley Ridge for Philadelphia, and is only drawn back again at the behest of her older brother, to help him care for their ailing father, who lives in a care-home, in mental and financial shambles. Just after she returns home, another girl goes missing— none other than Annaleise Carter, their alibi all those years ago— turning a scorching spotlight back on Nic and her friends, and busting Corinne’s case wide open.

Both Smith and Miranda write fast-paced thrillers, the aim of which is to discover just what happened to those seemingly perfect girls (Joanna in Follow Me Down. Corinne and Annaleise in All The Missing Girls), though Smith’s is more of a murder mystery, while Miranda leaves readers guessing as to the particulars. Both books also feature unreliable narrators— Follow Me Down’s Mia is a pillhead, All The Missing Girls’ Nic barely sleeps, and rarely remembers to eat, when coming home, because her paranoia and mistrust is so overwhelming. Both of them wear themselves down, but Nic’s actions and reactions are somewhat more understandable, while Mia is her own worst enemy.

Both novels also take a run at the girls who are missing/gone/otherwise indisposed. Joanna is considered an untouchable angel with a bright, NYC-bound future in dance, but in secret, she has a “Tiger Mom”-sized monkey on her back and is either a topic of scorn or utter disinterest among her peers. Her potential (and highly inappropriate) relationship with Mia’s brother, Lucas, seems to be the most scandalous thing about her, at first.

Through Nic’s eyes, we see that Corinne is the kind of girl you warn your daughters to stay away from: at once mesmerising and vicious, she is the instigator of danger, and she finds inventive ways to hurt her friends big and small, leaving mental and physical scars as proof of her larger-than-life existence. Annaleise, meanwhile, is headed down that same path: an innocuously pretty blonde college grad on the outside, she’s a simmering cauldron within.

All The Missing Girls is told in reverse, keeping readers on their toes as they follow Nic through the aftermath of Corinne and Annaleise’s disappearances, while Follow Me Down is a linear story with near-ludicrous twists. I appreciate All The Missing Girls because it’s far more grounded, but also because— and this is a big one— Megan Miranda gave depth to her characters. Sherri Smith’s Mia Haas is nails-on-a-chalkboard grating: there is not a single redeemable thing about her, and she doesn’t even have the wits to properly close the investigation she is so intent on starting. She is a slave to her pills, but also, there’s no other characters who like her, or can reflect anything about herself back at her (aside from Lucas, who is gone). When Mia comes up against another person, it’s like teeth knocking against teeth; no matter how horrible the other characters are, Mia is just as bad or worse, and there’s no reprieve at any point in the book. By contrast, Nic has people around her that are able to highlight the good and bad parts of her: we’re not simply limited to her experience, though the entire story takes place in her POV.

Smith’s fictional setting feels flat, like she peeled it from a cut-and-paste guide to fictional small towns, and expected it to blossom with no effort. Miranda, meanwhile, gives life to Cooley Ridge and the people living there; they have flaws but also merits. No one is a complete sinner, or a total saint. During the course of All The Missing Girls, Nic does some unlikeable things, but she owns up to, and accepts the consequences of her actions. Mia blames everything on the people around her (understandable, given her limited intelligence). Miranda’s eventual conclusion has been cleverly-hidden in the very bones of her novel, Smith’s comes out of nowhere and makes no sense, and is, quite frankly, creepy as heck, but not in a good way. It felt like a cheap grab at shock and emotional outrage, while Miranda’s ending was truly a surprise that— shocker!— was in line with the rest of her deviously twisty novel.

Why you should read All The Missing Girls:

I’m aware that I’ve made All The Missing Girls sound like the pinnacle of suspense, but the truth is, it’s just a great novel (of which, there are many in the genre), and despite having similarities and a solid hook, Follow Me Down didn’t deliver. All The Missing Girls is not without its drawbacks, but its pros far outweigh its cons. I think I’ve pretty much made the case for it already. The follow-up (they’re both standalones, I’m not sure why it’s considered a follow-up, but it is) novel, The Perfect Stranger is out later this month. Buy a copy here.

Home » Fandom » Book BFFS: ‘Follow Me Down’ and ‘All The Missing Girls’