The successful Purge movie franchise is coming into your homes via your small screen. Writer/Director James DeMonaco, (who wrote and directed all three of the previous Purge films) will be the showrunner for the debut TV show, produced by Blumhouse and Universal Cable Productions together, and will be shown on the Syfy and USA channels.

For those of you that somehow missed the movies, The Purge is based on a simple and frightening concept, and we are introduced to a political party called the New Founding Fathers of America. In the films, the NFFA has risen to power and implemented The Purge, an annual event in which all crime is legal for 12 hours. This murder-without-consequences, is offered to the citizens as an attempt to lower crime for the rest of the year, but many protesters argue that it systematically targets the poor and protects the top one percent. There is no real bad guy; the true evil is human nature. Some people just like killing. 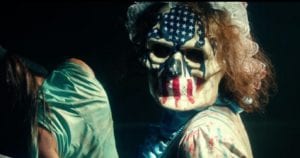 The TV show will go along the same story line, but will be able to bring out more details than the movies ever could. This doesn’t mean it’s the end to The Purge movies though. DeMonaco has stated previously that he is planning to write a prequel to the other three movies, that explains how it all came to be so bad. So fans, there will likely be a fourth The Purge.

No title for the TV show has been announced yet, and it is not clear if the show will run simultaneously on both channels. There are a lot of details still to come. As a fan of the first two films, but not so much Election Year, I am curious to see how this goes down with our current political state. 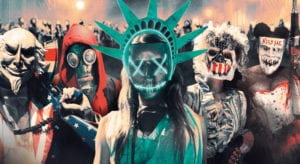 [embedyt] https://www.youtube.com/watch?v=aAEs3CabGIQ[/embedyt]
Are you ready for more The Purge? Let us know what you think!