Developed by The Game Kitchen and published by Team 17, Blasphemous is a side-scrolling homage to Dark Souls. There is little story told through traditional means; instead you begin by rising from a pile of fallen soldiers and, armed with only your sword, you forge ahead toward your ultimate goal discovering tidbits of lore along the way.

The bulk of the story is told through the various items you find throughout the sprawling levels, each featuring a short description and the option to view the lore surrounding the item. Like Dark Souls before it, it is up to the player how much they delve into the world and its mythology. 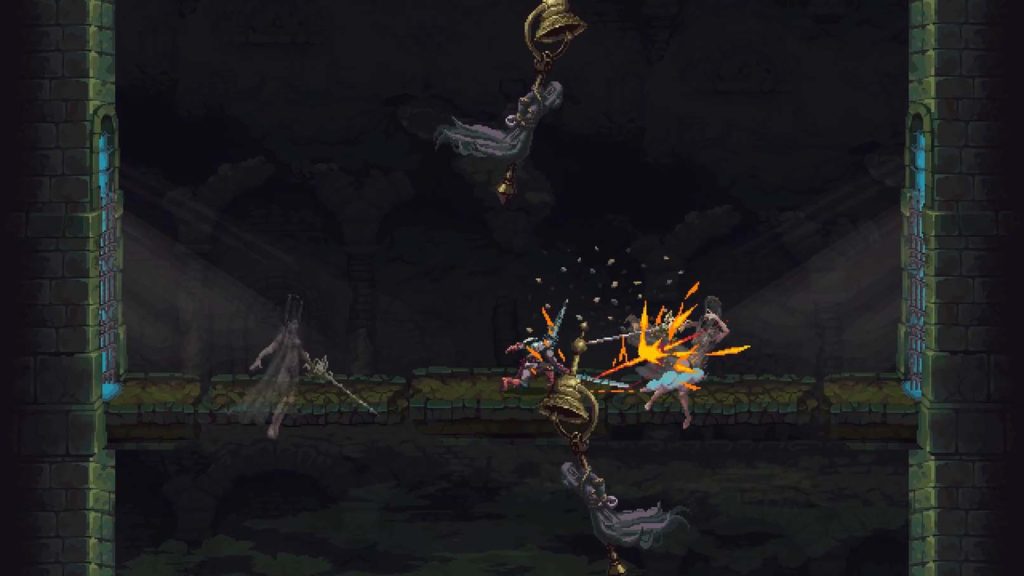 You are The Penitent One, set to fulfill The Great Miracle and tasked with seeking the Cradle of Affliction, guarded by the Three Humiliations. Deogracias watches your journey, occasionally stopping by after a fight to update your quest or to give you the back story of a recently fallen foe. The rest of the story unfolds during your nearly 20 hour journey, told through the various side characters you encounter, the levels themselves, items found scattered throughout, and the boss fights. Everything in Blasphemous exists to serve the overall story and it is a joy to piece together the lore as you progress.

Progression is metroidvania in style, with access to multiple areas open to you but many requiring specific items to completely traverse. Any fan of these types of games understand that hitting a brick wall just means to turn around and go another direction – eventually you’ll encounter the item needed to surmount that wall and carry on.

Secrets abound in Blasphemous’s bleak world, with many side quests available should the player choose to help the inhabitants. These range from helping an old man along his pilgrimage, offering items to a grieving bride, or figuring out trap doors based solely on paintings in a room. There is a welcome variety to the puzzles and many will require a bit of backtracking and thought to accomplish correctly. 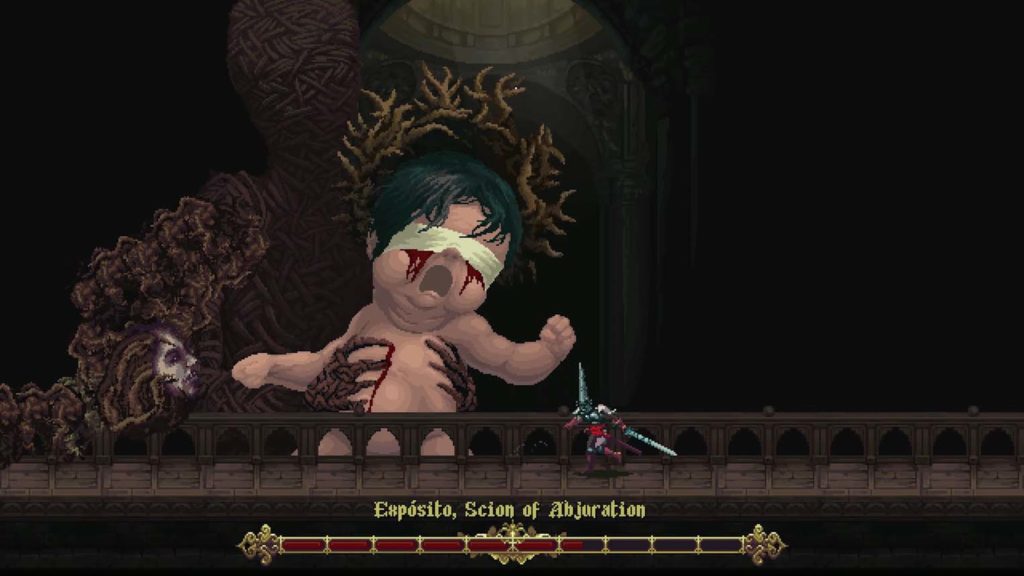 Scattered throughout the levels are Prie Dieus, which save your progress, refill your health, and refill your bile flasks. Bile flasks serve as your health refills and you begin the game with only 2 but gradually find more flasks hidden throughout. Resting at a Prie Dieu has a downfall, as all defeated enemies will respawn.

Each enemy defeated drops Tears of Atonement which can be spent to purchase new sword techniques at Mea Culpa shrines, items from merchants, to fill new bile flasks, and to remove guilt.

The Penitent One has a fervor gauge which allows the use of magical attacks found throughout the world in the form of Prayers. Fervour can be filled by attacking enemies or inflicting self-harm to trade your health for fervour. Prayers are wildly helpful in specific situations, reaching enemies and secrets you may not be able to on your own or giving you an edge over a particularly difficult boss. 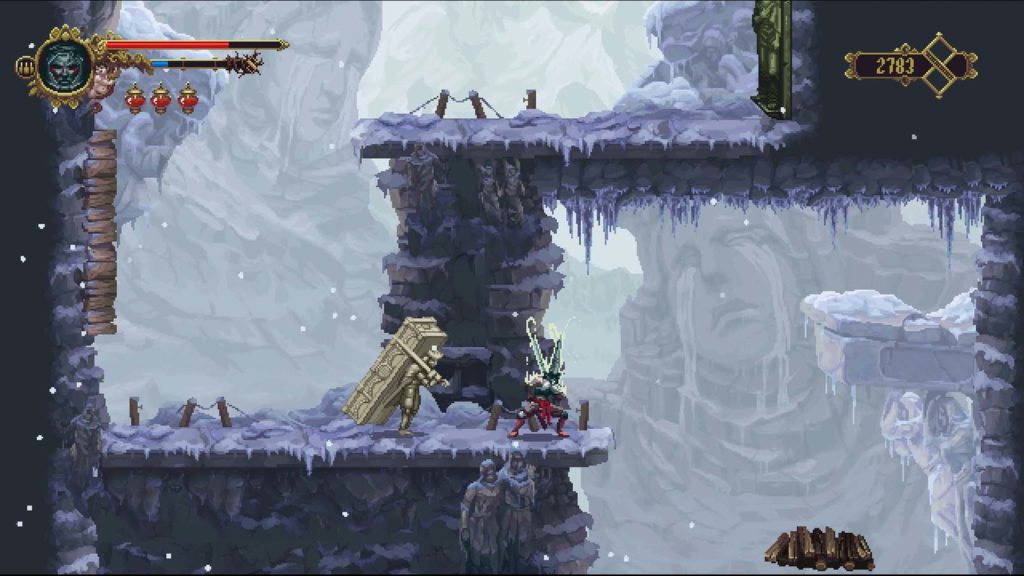 When you die a guilt fragment is left behind and decreases your fervour meter as well as the rate at which you build up your fervour. Recovering your guilt fragment grants you health and fervour, making recovery during boss battles sometimes best left when you begin to get low on health to give you a boost. Thankfully, you do not lose your Tears of Atonement upon death and if you died at a particularly nasty spot and can’t seem to recover your fragment, you can kneel at a shrine to remove guilt for a fee. Guilt fragments stack and multiple deaths will begin to greatly affect the amount of fervour you can build up.

Gameplay is simple enough; at its heart Blasphemous is essentially a side-scrolling action game. Your basic attack is a sword thrust and combo attacks. Unlike many side-scrollers though, parry is your best friend. I’m not one to parry in games, I normally don’t even attempt it, but I’m honestly not sure you could complete Blasphemous without mastering the art of parrying. Multiple enemies require a well-timed parry to even damage them. Thankfully, parrying is as simple as pressing one button at the correct time and becomes natural after a while. Combining technique upgrades, combos, prayers, and rosary beads help spruce up the combat and ensure that the game never becomes stale.

Rosary beads and relics both serve to grant special abilities to The Penitent One. Rosary bead knots can be found as you progress, allowing you to chain multiple buffs to your character including protection against specific elements, increased vitality, increased defense, etc. Relics grant new abilities, such as seeing new ledges, surviving long falls, and traversing through mud. Both are essential to completing the game, with proper use of relics being essential to uncovering every secret. 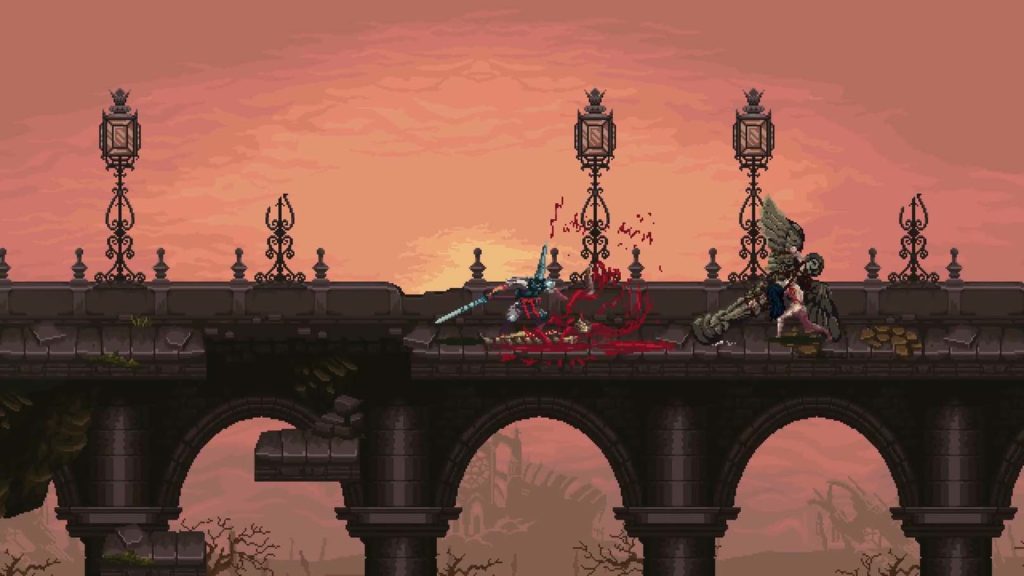 There are multiple collectibles which serve to increase play time, including 38 hidden Children of Moonlight and 44 body part collectibles. Some of these are extremely hard to find or require special abilities to reach. I found myself spending countless hours backtracking through previous areas anytime I found a new ability just to see what new items I could now reach.

The world itself is rather huge and thankfully there are a few portals which help make traversal easier. These are not in every area though and – like it or not – you will backtrack a lot in Blasphemous. That this is a plus rather than a negative says a lot about how enjoyable Blasphemous is and I found myself strongly debating even fighting the last boss as I wanted to keep exploring but knew my time with the game had to end eventually.

Blasphemous is a great game, full of creativity and gothic visuals. For nearly twenty hours I was enthralled, savoring every fight, cursing every death, and staying up late to complete just one more area. If you’ve been on the fence about trying out Blasphemous now is the time to jump off and experience a unique and incredibly crafted game.

Blasphemous is available now on PlayStation 4, Xbox One, Nintendo Switch, and on Steam for an MSRP of $24.99. A review code for the PlayStation 4 was given to Fan Fest News by Team 17/The Game Kitchen for the purpose of this review.