Love consuming content on the go, but don’t have the time to watch 45 minute episodes of your favorite TV shows? Well, the man of many trades Allen Maldonado has something very special for you! Everybody Digital, an innovative new app that’s exclusively licensed to stream short-films, and geared towards festival enthusiasts, recently launched and you’re going to want to check it out. The app, which also features original content written by Maldonado and his team of amazing creators, can be downloaded now on any iOS device (sorry Android users, your time will hopefully come soon)– and with only a press of a button, you too can transport yourselves into a bite-sized series or movie while let’s say: waiting for the bus, powering through that super long study sesh, or even relaxing before bed.

The actor/director not only writes for STARZ hit series Survivor’s Remorse, but also has a recurring role on ABC’s Black-ish and recently chatted with Fan Fest News about his master plan for his newly developed app, and how he aims to re-shape the short film landscape to actually be profitable for his fellow content creators. He was transparent with his intentions on making the business a better place to grow, and also teased his upcoming stint starring alongside Tracy Morgan in The Last O.G.

MM: You’re best known for playing an assistant on ABC’s Black-ish but you just launched this awesome new app called Everybody Digital. Can you talk about that process and what inspired you to create the app?

AM: I’m a short film maker and it was inspired by heartbreak in the short film genre. The only outlet is Film Festivals, and during that process I won countless awards and had gotten into numerous festivals and then once that fifteen months span ended, I think I just kind of went off a cliff. There was no distribution. I couldn’t really get my films to the masses. And from that heartbreak is what inspired me to create a platform for Short Filmmakers who experience the same disappointment that I did, and also broaden the audience of short-films. It’s seen as a stepping stone rather than an actual industry. Music videos have progressed to and vine and Instagram videos, there’s a billion dollar business behind it. I wanted to create a platform and also an industry where one day short film makers will be able to make money and become stars by doing short-films.

MM: I’ll be honest, I was really fascinated by this idea because as somebody who does go to film festivals and gets to consume that kind of content, not everybody is really able to do that and to have a place where you can go and watch it after the fact or watch it again because you really enjoyed it, I think that’s going to be really important in changing the landscape of short films as a whole.

AM: Yes, often times when you’re doing these film festivals, the scheduling is all over the place. You have to make decisions on “if I see this I won’t be able to see this” and vice versa. This platform also takes care of that problem where whenever you find time you can watch a short film. The categories are separated in one minute, five minute, ten minute, and twenty minute categories. It’s a platform for people who enjoy short-films and reintroducing short-films to people that may not even know that they enjoy them.

MM: That’s great. And I know you want it to be consumed by people on the go but what is your long term goal or hope for this project. Do you think that you would want it to be something where you could access on your computer or will it stick to mobile devices?

AM: I want to stick to mobile devices. That’s the big goal. I want it to be the Netflix of mobile devices. I want to be able to capitalize on that. The industry is shifting where people are getting 60-70% of their entertainment through their phone device. I want to cater to that demographic. As more and more people are being unplugged, with the success of Netflix, people are more susceptible to binge watching rather than scheduled television. There are a lot of things that are shifting and my main focus is to be able to provide content through mobile devices to people on the go.

MM: That’s amazing. I know it’s sometimes hard to binge watch things on Netflix on your phone because you’re watching long form shows, most of the time, 35, 45, maybe an hour episode. And it’s hard to do that. To be able to have those bite-sized moments on the go is going to be life changing for people always on the move.

AM: Exactly. And nothing on the app is over twenty minutes so we take that into consideration, what you just mentioned. It was one of the reasons why I put that limit on there. You can watch something on your phone for five or ten minutes but after 45 minutes you start to feel your forearm.

MM: Everybody Digital also has an original short film coming out, The Hollywood Way. Was that created with intent to highlight Hollywood’s current casting couch climate or was it just a coincidence that you guys came out with that?

AM: It really was just a coincidence. You know, as the writer of the film, some of the things may be intercepted in the end to feel the temperature. I’m writing and just pulling out imagery. I’m a big imagery person. What I was feeling and what I was seeing just exploded in the last couple of months with everything. It’s perfect timing for the film. Sometimes it just happens. And Peter Mackenzie did an incredible job. He’s also on Black-ish. It’s a great piece and an educational piece as we give our view on this as we see it, the sub culture in the entertainment business. It’s very disturbing. I think we give a nice take on it and people really should watch and enjoy and learn from it.

I love it. It’s available now and urge everyone to definitely check it out not just for the subject matter but Peter Mackenzie is creepy in it.

MM: It’s very eerie. Even watching the trailer, I felt like it was familiar, with what’s going on right now. It’s eerie but familiar at the same time.

AM: It’s one of those things you look at and go “oh, this is right on time.” It wasn’t like it was manufactured because of what happened. We shot the script last year, I think. So it was way before any of this stuff started to boil over. It’s just perfect timing.

MM: It is a perfect storm. To go back to what we were talking about earlier, Everybody Digital has been dubbed the Netflix for short-films. How does it make you feel to be compared to a streaming service that has become a powerhouse in the culture?

AM: It’s incredible being that this was just a thought, an idea two years ago and to see it grow and become what it’s becoming as we’re still early. But to get those comparisons is gratifying knowing all the hard work that me and my team are putting in. To get that is an incredible honor.

MM: And you’re a really busy guy. I mean, in addition to the app, writing, and Black-ish you’re also starring opposite Tracy Morgan in this upcoming sitcom, The Last O.G. Can you give the audience a glimpse into your character and what we can expect from that project?

AM: Yeah, definitely. I am starring opposite Tracy Morgan, the show is produced by Jordan Peele. We have an all-star cast here. I play little Cousin Bobby on the show. I’m sort of the idiot savant. I’m not the sharpest tool in the shed but I’m the smartest. I’m often in trouble and giving the wrong advice but it’s all out of love. It’s extremely funny as Tracy’s character is recently released from jail and discovers a gentrified Brooklyn that is entirely different from when he went in fifteen years ago. And he discovers that his girlfriend, before he was locked up is pregnant with his kid. So he has two twins and she’s married to a white guy. It’s hilarious. The show is incredible as we’ve already finished shooting and it’s premiering spring of next year.

MM: We’re looking forward to that. As I said, you pretty much do everything. There’s nothing you can’t do, in my eyes. You wear so many different hats between writing, acting, developing the app and creating content. What would you say is your passion? Do you have one you prefer over the other or is it just all one big package?

MM: If you were to construct a donut, based on your personality in real life, what kind of donut would it be and what would be on it?

AM: That is an incredible question. What donut would I be? That is fantastic. That’s tough. Give me a second. Donuts are special now. They have donuts with cereal on top of it. I’d be a chocolate donut with the nuts on top. Salty, sweet, all in one.

MM: To conclude, are there any new projects coming up you want the audience to know about and what’s next for the man who does it all?

AM: Wow, I have a film out now called Where’s the Money. I shot it myself, that’s out now. Also, I urge everybody to download Everybody Digital, man. It’s the new way. 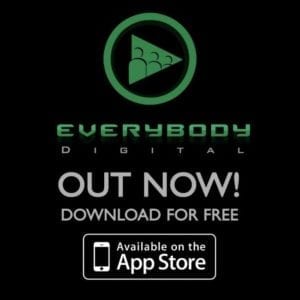