Black Adam is currently filming, gearing up for its release just a little over a year from now. The film has been in production for a little while, but Dwayne Johnson reveals how much is left to film on his Instagram! It looks like they could be wrapping up pretty soon!

Dwayne “The Rock” Johnson has been working incredibly hard to get ready for this role. This will be his entry into the DCEU and fans can’t wait to see him as the titular Black Adam. Throughout the whole thing, Johnson has been updating us about his prep and exercise for the role.

Hearing him talk about it really makes it seem like this was one of his most intense roles yet. He posted a picture a few weeks back, showing how ripped he looked for the film and fans went absolutely ballistic.

We’re still having trouble embedding Instagram links, so I’ll just link to Johnson’s page, and include the picture below.

He posted a picture of his meal, saying “Doesn’t look like much, but here’s my Saturday night post leg training meal/ground tenderloin, brown rice with broccoli & pineapple🍍(for digestion 😉) With 8oz-10oz of water. All my 6 meals per day are strictly measured out – including water and sodium – as we go into our final three weeks of production for the filming of BLACK ADAM. Commit, push all chips in and do your best to trust the process,” 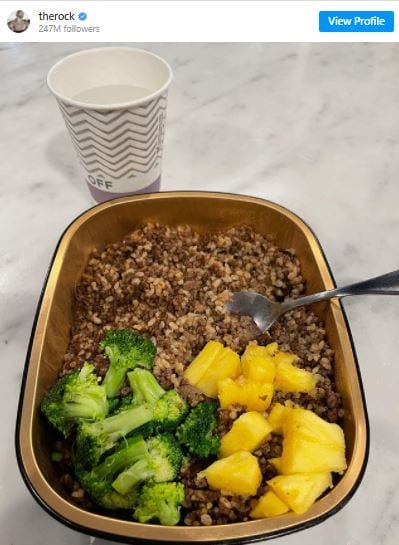 Food isn’t the only thing the star teased. He’s shown us the opening page of his script before, calling out all other Marvel and DC Heroes. Here’s what he wrote at the time,

“I wanted to show you the opening page to my script – which I look at every time I open this,” Johnson explained. “I’ve memorized these words for years and years and years now. But it gives you guys an example of who Black Adam is – and who Black Adam is to the world of the DC Universe. But also, I think, who Black Adam is to the world of superhero universes period. And that is the DC Universe – but that also includes the Marvel superhero universe too. Now look, I’m not saying there’s going to be a mashup, I’m not saying that. But what I am saying, is that it doesn’t matter to me – and it doesn’t matter to Black Adam: You put ’em all on notice – whether their DC Universe or part of the Marvel Universe – they all get put on notice now.”

Now that we know how much is left to film, we can get hyped for the inevitable release of trailers and other marketing!

Home » Movies » Black Adam: Dawyne Johnson Reveals How Much Is Left To Film!