Billy Eichner is revealing what caused Carrie Underwood to block him on Twitter. Recently, while appearing on Watch What Happens Live, as Buzzfeed noted, Eichner opened up about his feud with the country singer. The Bros star explained that blocking happened because of a joke he made about Underwood liking an anti-mask tweet.

A Twitter follower of Eichner’s asked if he knew why Underwood blocked him on the social media platform during an episode of WWHL. He replied that it was “Carrie Underwood blocked me from Twitter, which I consider a great honor. It was one of the great thrills of my life.” and made a joke referencing one of her well-known tracks. Then, he went on to share his opinion about her reasoning for blocking him. 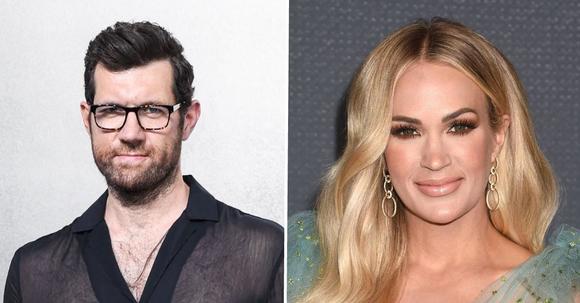 During the “height of COVID,” Underwood “retweeted a speech about how kids shouldn’t have to wear masks in schools, letting her political views be known for the first time.” according to Eichner. He was most likely referring to when Underwood came under fire for liking a post from conservative pundit Matt Walsh, who made several false claims regarding the epidemic and opposed mask requirements. The star of Difficult People continued, “I guess I made some jokes about that that went viral on Twitter, and she didn’t like that.”

A year has passed since then. Eichner made a splash in August 2021 when he published a screenshot of Underwood’s Twitter account, which revealed that she had blocked him on the site. The block did not put him down in the least, as he wrote on WWHL. He was ecstatic and stated, “ICONIC.” apparently overjoyed by his own comments. Following Underwood’s Twitter controversy, she was blocked from the social networking platform. She came under fire for liking a video from Walsh in which he claims that forcing children to wear masks at school is akin to “child abuse.”

Many fans tweeted their disappointment after learning that Carrie Underwood had liked an anti-mask tweet from Matt Walsh, a well-known critic of mask-wearing.