Billie Lourd took to Twitter on Tuesday to thank those who have supported and stood behind her following her mother, Carrie Fisher and grandmother, Debbie Reynolds, deaths.

Lourd, who is a regular on Fox’s Scream Queens, posted a picture of herself, Taylor Lautner, and several others, all dressed up in onsies. Along with picture, she wrote:

“This group of onesie clad supremely supportive humans (and many others #notpicturedbutinthepicture) are the kings and queens of my world #gratefulfortheirgreatness #friendsfindingthefunny,” 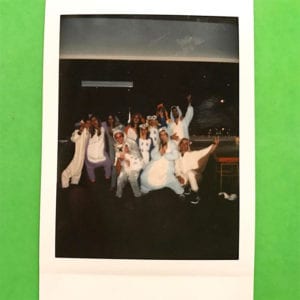 She and boyfriend Lautner have recently been seen vacationing in Cabo San Lucas, Mexico. She is said to be in very good spirits but other than her recent post, has chose to steer clear of social media at this point.

Fisher was 60 when she passed away on December 27, 2016 after suffering a heart attack while aboard a flight from London. Reynolds was 84 and died the very next day after collapsing while preparing Fisher’s funeral arrangements. She suffered from an intracerebral hemorrhage. They both had a joint funeral on January 6, 2017 at Forrest Lawn Memorial Park in Los Angeles.  Some of Fisher’s ashes were buried with her mother in an urn in the shape of a Prozac pill.