Last night’s Better Call Saul wasn’t just the half way mark of season three but could also have been the half way point of the entire series. It seems throughout these two and a half seasons that the main plot thread has been Jimmy’s relationship with his brother Chuck or his lack there of. With each passing episode it has become more and more apparent that Chuck wants nothing to do with his brother and his issues with Jimmy would make him a psychologists dream patient, and that’s ignoring the electricity thing. A large part of Chuck resents Jimmy for the way he acts and how it contradicts the way he is accepted by family and peers as there seem to be no repercussions for his actions. It’s just Jimmy being Jimmy after all. Chuck has spent his entire life abiding by the law and living within it’s structures, and his brother Jimmy not only bends those rules, he damn near breaks them, and still people see him as worthwhile. This type of thinking befuddles Chuck because he has no real emotional attachment to anything outside his profession. The flashback at the start of this episode wasn’t just done to weaken Chuck’s character when it comes to his condition, but to also display that he has no real emotional attachment to anything, including his ex-wife. Chuck is married to the law and those who don’t understand that aren’t worthy of his love to begin with. 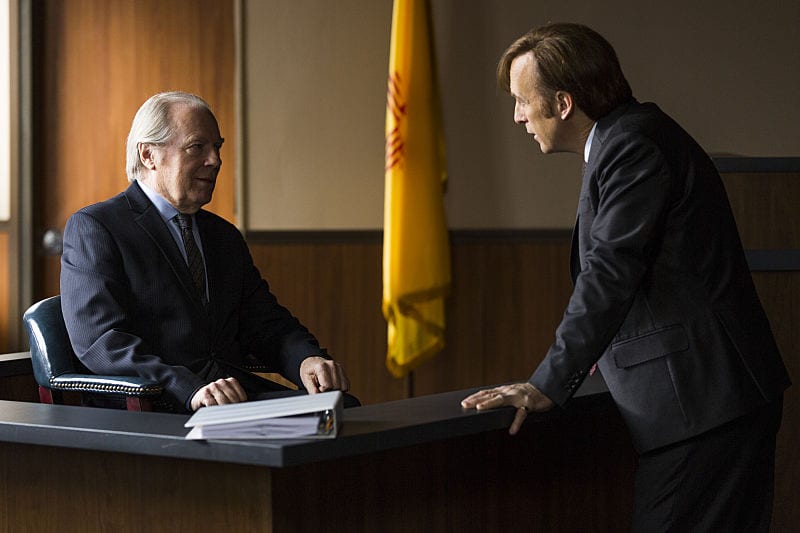 Which is a shame because all Jimmy wants is a brother. Someone who will have his back and support him. Someone who will reach out and guide him not because they’re concerned what his actions will do to their legacy but because they actually want the best for him. Jimmy just wants to be loved and has a brother who is incapable of doing that because of petty jealousies and an extreme disconnect from emotion. This in turn has resulted in a Jimmy who aspires to be like his older brother but purposely acts his own way in the hopes that he could get his brother’s attention. I mentioned during my series preview that the story of Better Call Saul is a tragic one. Saul Goodman may be an over the top, flashy, flamboyant, narcissistic, ass hat but Jimmy McGill is a lost soul who has been searching for his brother his whole life only to find hate, resentment, and loathing. No wonder he becomes the man we see in Breaking Bad. Why would he want to “grow up”, so to speak, to be Chuck?

Last night’s brilliant episode seemed to bring some closure on the long standing relationship between Chuck and Jimmy. Better Call Saul has built itself on the backbones of this relationship and now everything is out in the open. For Jimmy, he now has his answers and understands everything he’s always suspected about his brother. While it’s something he’s long believed, hearing that your brother thinks your not worthy still packs the emotional wallop, and Jimmy now has a reason to move on with his life, but what does that void leave? We know that void gets filled by the character of Saul Goodman who is both the anti Chuck and Jimmy. Saul exists on a whole different level but his existence makes sense. Why would Jimmy want to associate with Chuck anymore? The realization that he never meant anything to Chuck is crushing and what better way to disassociate yourself from family then by changing your name. You can pretend that they don’t exist anymore because you’re someone entirely different. That whole belief is shrouded in self denial but it could be the easiest way to disconnect yourself from everything that haunts you. Start fresh while killing off who you were. 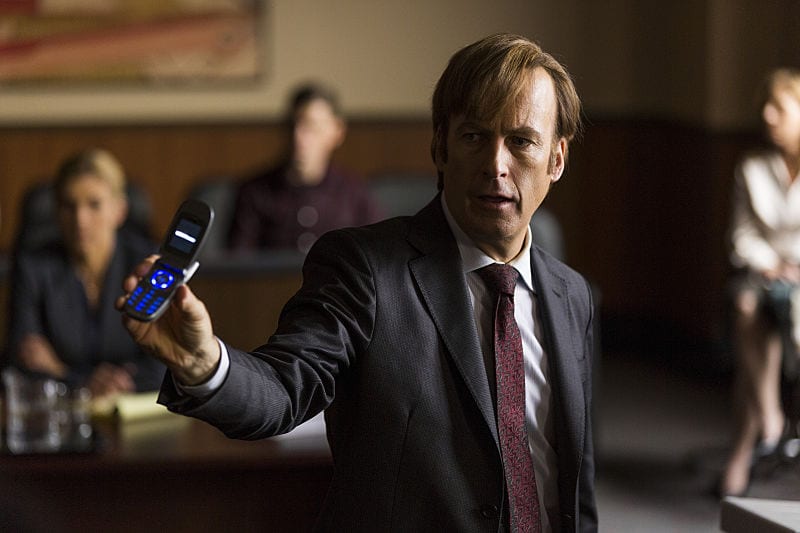 As for Chuck, life becomes a bit more difficult. This whole ordeal between himself and Jimmy has left him exposed to everyone. His ex-wife, his peers, and his partners/colleagues now see Chuck in a different light and for someone who has bathed himself in darkness, it’s not flattering. There is no going back now. Jimmy played the only card he had in the deck, despite how dirty it was, and showed the world that Chuck’s “condition” was self inflicted and non existing. Having Hueel (hey, it’s Huell guys!) plant the cellphone battery in Chuck’s breast pocket was low, but served it’s purpose. There was a true A Few Good Men feel here as Chuck went on his tirade about how Jimmy becoming a lawyer was the biggest besmirching of law the world has ever seen. This was a man lost in his rage and disbelief that the world could allow someone like his brother to succeed when he had no right to. Now what does he have left? It appears that in the eyes of his peers he’s a loose cannon who is mentally unstable, and the idea of practicing law again might be far fetched. As for as his personal relationships? Well, I don’t expect Jimmy to hang around and his ex-wife might have a better understanding on why she didn’t stay married to Chuck in the first place. Chuck looks to lose everything because his brother out lawyered him, and that is something he’ll never be able to recover from. Maybe it’s a bit just. Maybe it’s a bit unfair. Maybe, maybe, maybe…

“Chicanery” is the best that Better Call Saul has to offer. Everything with Gus and Mike rightly took a back seat this week so we could really focus and dive into the deterioration of the McGill family. The building conflict between Jimmy and Chuck has been one of the driving forces of this show and now everything is out there. For a show that’s about lawyers, it was great seeing a large part of the action take place in a courtroom. I often speak on the excellent performances of Bob Odenkirk and Jonathan Banks, but I would be remiss in saying that Michael McKean gave one of his best performances as Chuck this episode. He did everything masterfully. Whether it was practicing his responses before taking the stand while he tried to convince himself that he cared for Jimmy or his emotional breakdown at the conclusion of the episode, McKean straight up killed it this week. His performance was compelling, riddled in sadness and a disconnect from actual emotion. He managed to be both sympathetic and a monster. It would be almost criminal to not see this man nominated for an Emmy.

Where do we go from here? I don’t think the transformation into Saul Goodman will be instant but I suspect it’s rapidly approaching. I don’t see Jimmy being disbarred here as he again finds a way to one up the system. There’s a gift to Jimmy’s approach of getting away with things, that we know will eventually catch up with him, but is still riveting to watch. His victory will bring its wounds and Jimmy will need to heal. I suspect his healing will come in the form of Saul Goodman. As for Chuck… I think he retires to his space blanket filled home, bested by Jimmy, while his career in law starts to slowly slip away. I don’t see this as a victory for either character.

Also, it’s nice to see Huell before he spends the rest of his life in that witness protection room.

What did you think Geeklings? Was this best episode of Better Call Saul yet? Were you happy to see the focus solely on the McGill brothers or did you miss Mike and Gus? What do you think will happen to Chuck and Jimmy now? Sound off in the comments below. As always if you’d like to talk all things Saul or Breaking Bad you can find me on Twitter @iamgeek32. Until next week my friends.