Chuck, Chuck, Chuck, you dastardly son of a b you. After all the tension that has filled the first two episodes of this season, Better Call Saul sort of took a step back this week in order to catch it’s breath and start to introduce the bigger direction this season will be heading in. That’s not to say that this was a bad episode, because it wasn’t, but when compared to the first two, “Sunk Costs” will be remembered as the episode that fired the first shots of the impending wars.  Yes wars, as in more than one. 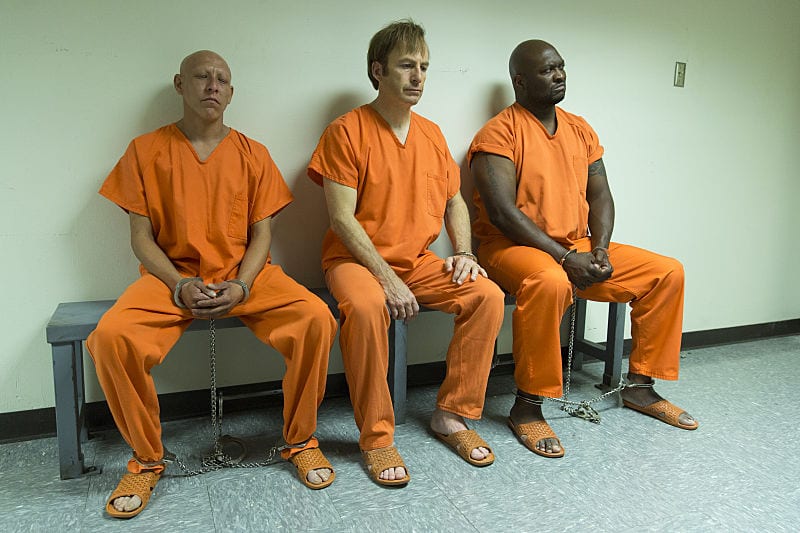 On one front you have the war for the soul of Jimmy McGill which is being waged between Jimmy and his older brother Chuck, and this seems to be the shows most important war. There was a scene last night where Jimmy was talking to Kim about why he had to represent himself, where he referenced the fact that “Jimmy McGill” needs to take on Chuck head on (or something along those lines), and the line stood out to me for a number of reasons. We know because of Breaking Bad that no matter what the outcome of Better Call Saul is it means there will be no more Jimmy McGill. He’s done once this series wraps. There isn’t even a whisper of him through the Breaking Bad saga so when Jimmy says that he’s taking on his brother for “Jimmy McGill” it adds a new layer of tragic depth. Chuck’s betrayal has shaken Jimmy too his core. Despite all their differences Jimmy believed in his heart of hearts that Chuck cared for him. Even if that way was a bit deranged and kind of caring through loathing and neglect, it was something that kept Jimmy’s fire burning with hope that he could turn his brother around. That he could win him over. We saw last night, while Jimmy was waiting for his “ride”, that the fire has now been extinguished. Chuck gave a long speech of how everything he’s doing is for Jimmy’s good and that he really wants to see him come out of this a better person, and when Jimmy does Chuck will be there waiting. Those are the words you kind of want to hear from your older brother as he’s selling you out but the only problem with Chuck is they ring empty. Nothing he’s doing here is for Jimmy’s benefit, nothing he’s doing here is to get Jimmy to walk the straight and narrow, and Jimmy knows it. As he sat there lighting his stale cigarette we watched whatever family connection that Jimmy was holding on to die. The systematic and cold way he mapped out Chuck’s future was harsh, unrelenting, and his way of letting go of Chuck. Telling Chuck he was going to die alone wasn’t a threat or something to say to try and hurt back but Jimmy’s way of really displaying that their bond had been destroyed; for Chuck to understand how far he’s taken things.

And for what really? Yes, what Jimmy did was underhanded, shady, against the law, and kind of dickish but I get it. I understand it and I think to a degree Chuck does too. I’ve argued throughout my columns and reviews that the thing about Jimmy that gets to Chuck the most is the fact that he’s a lawyer. There is no way that someone like Jimmy can be a lawyer when someone like Chuck, who upholds the law and respects it, already is a lawyer. That’s the biggest black eye on his legacy, and Chuck feels that it’s a black eye on the lawyer occupation in general. He fails to see that he inspired his brother to take this career path and thus loses an opportunity to nurture Jimmy’s gift. Just think if Chuck had taken the time to actual mentor Jimmy and how the future of this story could have changed. Would there have been a Walter White and Jesse Pinkman if Jimmy McGill stayed Jimmy McGill? I would argue no as those two really didn’t have any true structure until Saul came along which is interesting because it makes Chuck kind of the catalyst for this whole saga. Is it a stretch? Maybe. Is it worth thinking about? Of course. You’re welcome.

But that’s all speculation (see what I did there? #lawyerterms) but what isn’t is the fact that Chuck’s whole rouse was to put Jimmy in a place where he would have to be disbarred. The plea barging that he offers is super generous and doesn’t include any jail time but it does hang on the condition that Jimmy gives up practicing law. That would rid Chuck of all his problems. Let’s be honest, Jimmy going to jail continues to blemish his legacy but if he’s able to get Jimmy out of the courtroom… legacy salvaged. We know that Jimmy, and Kim who will be representing him, are going to fight this and not go quietly in the night, but it raised a lot of questions for me. Is it possible to be disbarred and then re-barred (is that a term?) under a different name? Does the trial even go through or does something happen to prevent it, like Chuck’s death? Does Jimmy change his name out of necessity or out of guilt? Like I said tons of questions that I’m sure will be answered as this war rages on throughout the season. 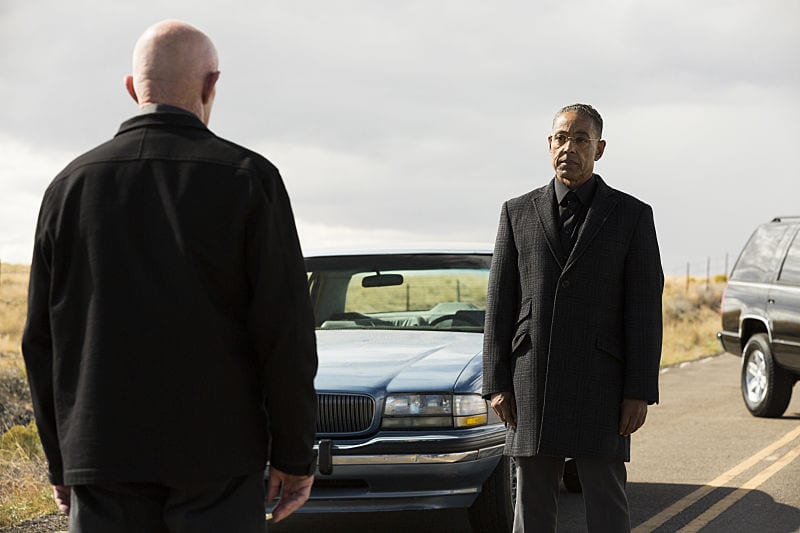 Elsewhere Mike seems to be waging war against Hector Salamanca on behalf of Gus Fring. Oh please, did you think he was acting on his own? You know just as well as I do that that conversation on the highway ended with Gus giving Mike a job. That whole confrontation was perfectly orchestrated to not only let Mike know he will never have the upper hand but to entice him into working for Gus. We know from Breaking Bad that Gus Fring doesn’t do anything without weighing allllllll of the consequences. The fact that he revealed himself to Mike so early means that he sees something in him, and presented enough information to make Mike curious. Come on, “it’s not in my interest for Hector Salamanca to die…at this time”, whose going to walk away from that?! Gus is a genius and I love seeing how he operates. In Breaking Bad we got a taste of it but that whole time it seemed that he was matching wits with Walter as well as being blinded by his hate of Hector. In Saul we should really be able to see how his empire takes off and just how cunning he can be. Yes please.

To his credit, Mike is just as dastardly (that’s twice that I’ve used that word this column). His plan to screw up Hector’s shipment truck was brilliant and meticulously orchestrated. I feel like I say this a lot but watching Mike in action is like watching poetry in motion. Every move is so calculated and every outcome anticipated it’s almost hard to believe that Gus got the upper hand on him. But in his element, Mike is able to do just about anything. Getting rid of Hector’s trucks clearly opens up the lane for Los Pollos Hermanos to start expanding their empire, as was seen in the opening shot which I’m pretty sure fell in the Breaking Bad time line (#shoedecay), which will undoubtedly bring about the big war that’s been looming between Hector and Gus. At this point it’s unavoidable. 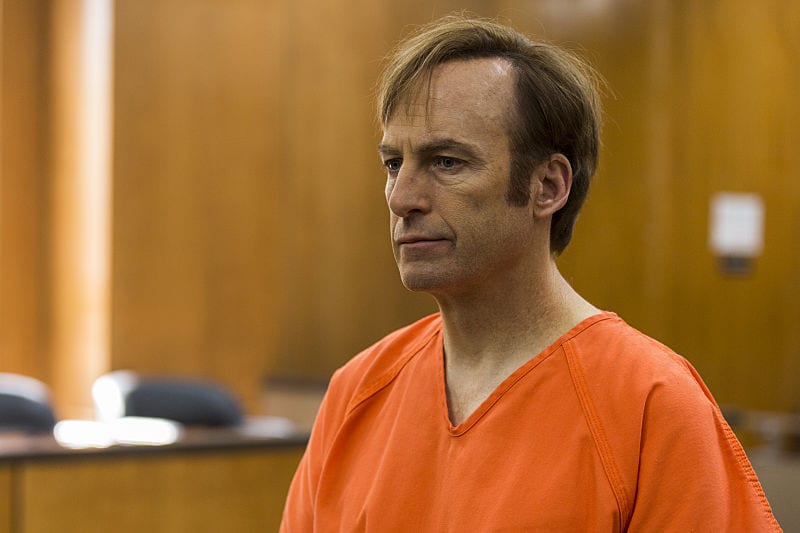 There you have it Geeklings. What did you think of this weeks episode? Do you think Chuck’s master plan to have Jimmy disbarred will work? Can Jimmy somehow beat Chuck and the system? What exactly is Mike’s roll for Gus or is he working alone? As always the comments are yours for any thoughts or theories. If you’d like to talk all things Saul or Breaking Bad you can find me on Twitter @iamgeek32. Thanks for reading and many huzzahs!