Anyone want some curley fries?

After last weeks outstanding premier it appears that Better Call Saul is looking to converge some stories lines with it’s second episode of season three. I for one am really excited about the prospect of tying some things together as it seemed that the majority of season two had Jimmy and Mike existing on different paths, which would be my only complaint (and a minor one at that) about last season. Their individual story lines were excellent and it made sense that they would travel different story arcs, but I’m a spoiled television brat. The chemistry between Bob Odenkirk and Jonathan Banks is fantastic and I just want them to share as much screen time together as possible. I love watching this relationship grow, and the two play off each other tremendously. If it was up to me we could rename the show The Adventures of Mike and Jimmy… not really but you get what I’m saying here.

It looks like I’m going to get my wish this week as it appears that Mike might be in need of a lawyer who isn’t afraid to deal with less than savory things. When we last left Mike he was packing heat while in pursuit of the man whose been placing GPS tracking devices on his car. One thing we know about Mike is that he doesn’t like loose ends or believe in half measures which means who ever has been tracking him could be in for a long night. Although, with that same line of thinking, Mike doesn’t just jump into things either. He comes prepared and I believe his contacting of Jimmy will be an attempt at reconnaissance work; perhaps to use Jimmy to dig around in finding out whose so interested in Mike’s comings and goings. This way Mike can get his info and still keep his nose clean. 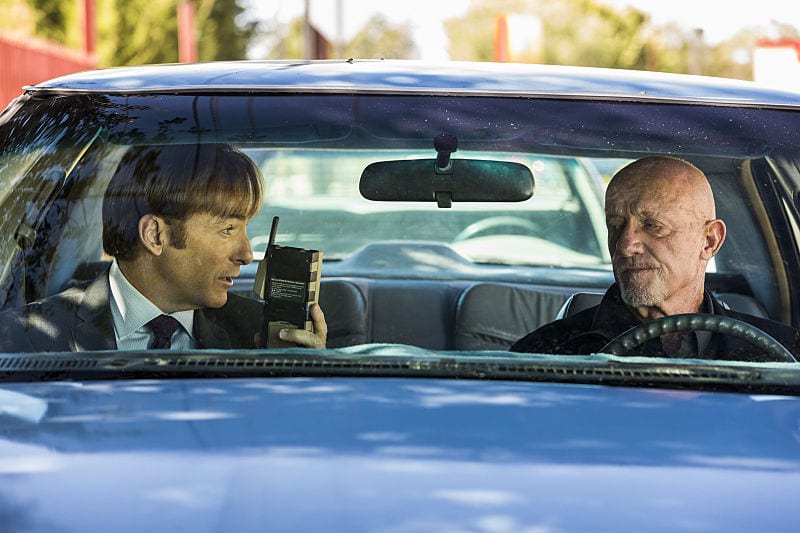 If this trailer is any indication then it appears that we’re going to get our first glimpse of Gus this week which is all types of exciting. I don’t mind the slow burn on Gus as it’s helps keep him as such an imposing figure and fits his character. Much like Mike, Gus doesn’t jump into things and does his homework. Instinct and knowledge are Gus’s power and are what have allowed him to become so successful. I have feeling seeing Gus pre Walter White will not only make us appreciate this character even more, but probably effect some people’s perception of Mr. White. Think about it, Gus had a great thing going before he met Walt. A great thing. The one time he should’ve followed his instinct he didn’t and it got him all Harvey Dented. Man, Walt ruined everything. That’s a story for another day.

Other things to keep an eye out for with this episode-

There you have it Geeklings. Episode two of Better Call Saul airs tomorrow night and with the appearance of Gus expect things to get a little… bad. See what I did there? I think I nailed it. Tell me what you’re looking forward to the most in the comments below. Any thoughts, comments, or theories are welcomed. As always you can also find me on Twitter @iamgeek32 if you want to further any discussion on any topic. In the mean time, happy viewing and see you all Tuesday with my review.