One of the things I’ve enjoyed the most about the third season of Better Call Saul is how little this story is looking to play around. We may only be heading into our third episode but the pedal has been on the proverbial floor since we checked back in on Chuck’s space room and the recording of Jimmy’s confession. Normally when a show ends a season with a bit of a cliffhanger, much like Chuck recording Jimmy, there’s a bit of a ramp up before we start to see any resolution/fallout to that event. A number of shows like to build that tension and “what if” scenarios until there’s nothing else for them to do but deal with the problem head on. Over at Better Call Saul things are a little different. As of episode two, Jimmy now knows that there’s a tape and he’s already confronted Chuck about it. Like I said, we’re not taking things slow this year, Saul is taking it’s story head on and it’s resulting in some tremendous television.

We have already reached the point where Jimmy was made aware of the tape and instead of collecting himself and acting cool, Jimmy loses himself and foolishly confronts Chuck while destroying the evidence. Which is exactly what Chuck was hoping would happen. Which now begs the question, what happens next? That huge piece of story work is out in the open and I believe that the recording will be a catalyst for the transformation of Jimmy to Saul Goodman. In the season premier, I discussed how the story of Saul Goodman would be born out of tragedy or heart break, and I think we’ve seen the final stepping block towards this transformation. The only thing holding Jimmy McGill back was his need for his brothers affection, and the false belief that maybe, just maybe, it would be reciprocated. We can say a lot of things about Jimmy, and the way he acts, but we can not argue the fact that the majority of his actions are rooted in that desire to feel worthy or accepted by his brother. No matter how shady his dealings have been, the idea of Chuck, has been enough to keep Jimmy grounded. Not to say he has done some seriously suspect things, but most of those things seem sort of harmless in what we know of Saul Goodman’s potential. Now with Chuck turning his back on Jimmy, it seems that the dam has burst and we’re about to see something new rise out of those ashes. 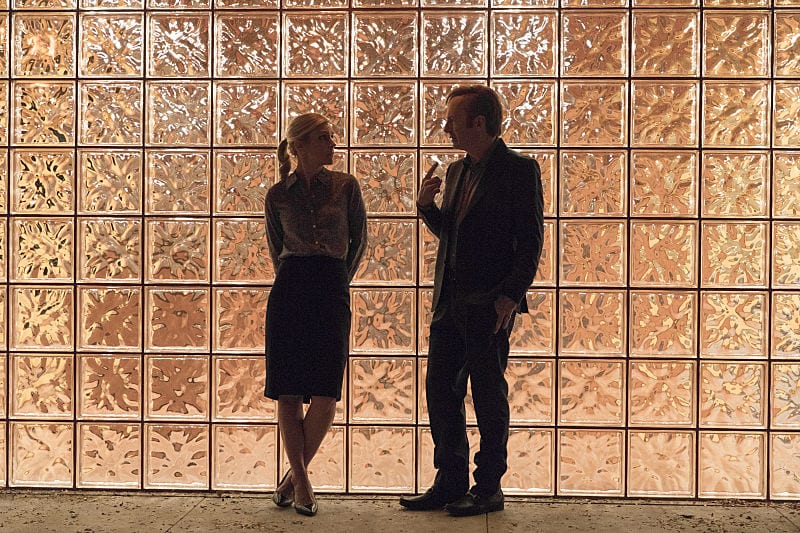 But first things first, there has to be repercussions to our actions and it looks like Jimmy is about to take a short trip to jail. Chuck has passed the point of no return and Jimmy’s super aggressive/emotional break in is cause enough for Chuck to take action. If the trailer is any indication it appears that Jimmy wants to represent himself here, I’m interested to what the charges will officially be, which contradicts some of the events from last week. I do recall that Kim took twenty dollars as a retainer in order to be Jimmy’s lawyer. I said it before and think it bares repeating, can Kim represent Jimmy in a case like this when she was the one who benefited the most from his actions? Not to mention, if Chuck takes this to court, which seems possible, what does this do to Kim and her relationship with Mesa Verde? A lot of things are currently hanging in the balance of what Chuck chooses to do next.

That’s not all though! Elsewhere Mike has been trying to find out who has been keeping tabs on him, performed a stake out, did everything by the book, and still ended up be one or two steps behind. Mike’s pursuit of Gus has been one of my favorite parts of this season as it’s converged story lines with Jimmy but also because of the enormous Breaking Bad ties that it holds. My god, all that tension! When we last saw Mike he was in the middle of the highway picking up a ringing cell phone that was waiting just for him. We know from Breaking Bad that there is nothing that Mike hates more than being played and I’ll be curious to see how he handles what comes next. Gus is an imposing character who currently is just looming on the horizon and I’m anxious for him to reveal himself. The relationship between Gus and Mike is not only a lucrative one but also rooted in immense amounts of respect and admiration. This highway cellphone call should be the first step in bringing these two together. I would imagine by the end of the season things will be going well enough where Gus will use Mike’s expertise to handle Hector. Just a theory though as that man has a bell waiting to be rung. Literally.

There you have it Geeklings, episode three of Better Call Saul is right around the corner and already the tension seems to be through the roof. What do you expect to happen next? Will Jimmy ever forgive Chuck for his actions or has that relationship been severed? Can Kim represent Jimmy knowing full well of his actions? Will Mike be responsive to Gus’s phone call? Sound off in the comments below. If you’d like to talk more Saul or Breaking Bad you can find me on Twitter @iamgeek32. As always, I’ll be back Tuesday with an episode review. Until then, happy viewing and many huzzahs!