A star has been born… well, at the very least a name has been born. Last week we heard the name “Saul Goodman” for the first time in the tenure of Better Call Saul, and it came from the most unexpected/obvious place. A television commercial. It would make total sense for Saul Goodman to be born in a television commercial because that’s how he was introduced to us on Breaking Bad and easily one of the things we associate the most with the character. As cheesy as these commercials tend to be, holy star wipes Batman, they hold a great deal of significance to Jimmy McGill. Think about it, in the very first episode of this series Gene escapes his sad existence by going home and watching his old Saul Goodman tapes. And why is that? Probably because these recordings are the most in control Jimmy ever is. It seems that he’s always doing something for someone else or maybe flexing his personality for someone else. When does Jimmy get to be Jimmy? Whether it’s adapting his personality to accommodate Chuck, or being the overly nice gentleman to his elder clients, to trying to keep his head above water not to let down Kim, Jimmy McGill hardly ever gets to be Jimmy McGill. One of Saul Goodman’s best traits is his ability to not only roll with a current situation but to also adapt to it’s climate. That’s something that he’s learned from Jimmy McGill, who has spent the majority of his life having to be a chameleon.

With these commercials, and especially with the Saul Goodman character, Jimmy is in complete control. He gets to be whoever he wants to be, and it’s freeing. I imagine as time goes on and he continues to “portray” Saul Goodman that it’s going to become more and more difficult for him to blur the lines between reality and fiction. We know at some point Jimmy is going to decide that Saul has the better life to live, and we have to wonder what’s going to push him to that point. Is it because Saul has no emotional or family baggage? Is it because Saul doesn’t have to adapt to the rules? Could it be that Saul is only out for himself and the almighty dollar? At some point something is going to click and we’re going to lose Jimmy McGill to the seductive side of fantasy. 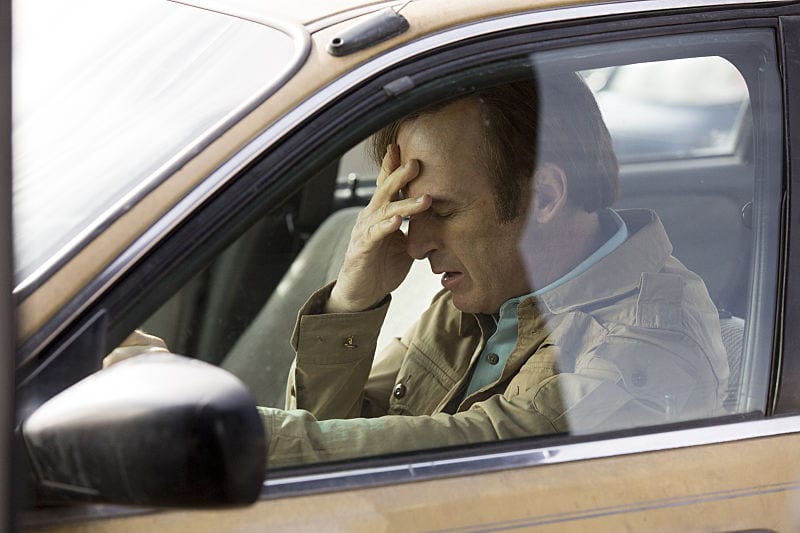 While all that is going down there is the impending conflict between Gus and Hector Salamanca that’s still brewing. As a matter of fact I think the biggest piece on the board just moved into striking distance last week. Nacho seems to be the wild card here, and I can’t emphasis enough just how fantastic Michael Mando was last week, as his family loyalty seems to run deeper than his loyalty to Don Hector. The involvement of his father is clearly something Nacho doesn’t want any part of as he knows it’ll break his fathers heart to find out his boy is a criminal, but it also seems that one simply does not say no to Hector Salamanca. Hell, Gus Fring doesn’t even say no to Hector Salamanca and Gus haaaaaaaaaates that guy. I fully expect Nacho to stall this talk with his father to buy him time to talk to, you guessed it, Mike.

I’ve always enjoyed the bond between Nacho and Mike, and if they have one of their late night empty construction sight rendezvous, I think Nacho can convince Mike how and when to take care of this Don Hector problem. Which in turn could lead to Mike going to Gus and relaying that intel and round and round we go until the map for Breaking Bad is all laid out before us. I just don’t see Hector Salamanca walking out of this season (pun intended!), as matter of fact, I’m not that hopeful for Nacho either.

Oh, and don’t forget that Saul casually brought in Lydia last week as Gus went shopping for laundry mats to house his meth cooking franchise. Seriously, once you take over the chicken world cooking meth seems like the next logical step, no? I found that arrival to be interesting in it’s timing and also a complete holy crap moment in how casually she was revealed. As much as I loved Breaking Bad I really couldn’t stand Lydia. She drove me nuts but seeing her in Saul helped to give a different perspective. Walter White was an erratic business partner. A man with zero experience, who often acted rashly with no accountability, and was an evil monster (yes he was!). Of course that would make any one seem kind of nutty. Lydia was used to working with businessmen, like Gus, people who had a plan and executed that plan with precision and poise. I’ll be interested in seeing if this version of Lydia is more put together than the version we see in Breaking Bad. But who knows, maybe she’s just a nutter the whole time. The conversations between her and Gus should be fantastic.

There you have it Geeklings! Better Call Saul heads into it’s final episodes of the season and we still have some big questions on the board. Can Jimmy survive a whole year without practicing law? How will he maintain his end of the rent/lease? Is Kim in with this Saul Goodman character or is everything that encompasses Jimmy’s existence starting to wear on her? Can Nacho reach a deal with Mike/Gus to take care of Don Hector? These last four episodes look to be super interesting with tons of Breaking Bad implications.Going to be fun to watch.

If you’ve got theories of your own, by all means sound off in the comments. You can also find me on Twitter @iamgeek32 to discuss all things Saul, Bad or geeky. See everyone Tuesday with my episode review. Happy viewing!

Image and trailer from AMC