Here at Fan Fest, we LOVE fans! For Fans, By Fans we are, after all! We are also very supportive of young journalists and aspiring writers. Today, we wanted to feature a young man named Shaun Hood! He recently wrote about Walker Stalker Convention for his school’s online newspaper. He interviewed Merri True, Director of Inventory Control for the event.

Check out his interview below!

In addition to the cruise, the people who run Walker Stalker Con also run a convention called Heroes and Villains Fan Fest. The Pentucket Profile communicated with a Walker Stalker Con employee, Merri True, via Direct Messaging on Twitter [interview has been edited for grammar].

Shaun: I know you moderate a few panels for each show, but what is your official title as a part of Walker Stalker Con and Heroes and Villains Fan Fest? What are your responsibilities?

Merri: I am officially the Director of Inventory Control. I handle ordering and accounting for all of the things needed to run the shows such as celebrity banners, sharpies etc. I am also in charge of all official Walker Stalker Merchandise. 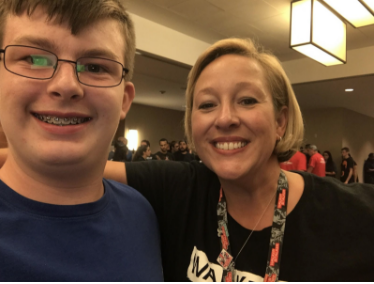 S: Were you involved in/with The Walker Stalkers from the beginning, or were they already a part of the convention industry when you joined?

M: I covered the very first WS convention as Press. I got to know James and Eric [the co-founders of Walker Stalker Con] a couple of months before the show so by the time I got there I already felt like part of the group. After that first event I was so impressed by what they had managed to pull off that I wanted to be more involved. I signed up to volunteer for their second and third show running the panel area and after that I was added to Staff.

S: So, what company did you work for as press?

M: I was a convention reporter for a website called The Year of Halloween.

S: What was the first large step towards where the organization is now (since you joined)?

M: I don’t think there have ever been small steps. I think James and Eric pulling off the first show the way they did was the first big step

S: Was there ever a city that Walker Stalker Con went to or was going to go to, but it just didn’t work out in the end? If so, what’s the story behind it?

M: All of the cities that we have been to have been great! It’s a lot of fun going to areas that we haven’t been to before and it is always fun going back to a familiar crowd. I don’t think we have ever gone to a place that didn’t work out.

S: What is the most notable memory or experience that you’ve been through while moderating a panel, or working at a show in general?

M: Coming up will be my fifth year, there are A LOT of memories to pull from. I love moderating panels because I am right there first hand seeing and hearing fans interact with their idols. On the convention floor watching attendees come out of their photo ops is probably the best thing. There are lots of happy tears coming out of that room.

S: As a former reporter, do you have any advice for student journalists or, more importantly, any advice for specifically someone like me who likes to write about conventions like you used to?

M: Don’t be afraid to ask conventions to cover as press. It never hurts to ask. Start at smaller shows and build a portfolio so you can submit for larger shows. Write, write and write some more.

Shaun Hood is a junior in high school. Outside of school, he enjoys going to conventions and exploring other ways to get involved in shows he watches. He’s currently taking a journalism class writing articles for The Pentucket Profile. Shaun is also a frequent caller on The Walker Stalkers Podcast.

Shaun’s original post can be found at The Pentucket Profile.