If you’ve ever wanted to take a peek behind-the-scenes of this monster of a show before the magic, we have quite the look for you! As a longtime fan and lover of WICKED The Musical, this was an amazing opportunity.
Nashville moved into the Tennessee Performing Arts Center this week-so if you’re a Nashvillian, you’re in luck!

We walked in to find at least 40 or 50 crew members working hard to get everything off the trucks and in place. It was a pretty amazing sight to see.

A highlight of the press event was getting to chat with the Company Manager of the Wicked Tour for the past 12 years, Steve Quinn. A little fun fact: the first time I saw Wicked on tour was in December 12th, 2005. Yep-I remember the exact date. I consider the night I saw Wicked a pretty big moment for me, as it is for many. It was what made me want to do theater, which eventually led me to wind up in the entertainment field. Steve actually revealed to me that he was working on the show at that time, which is pretty darn cool. Check out Wicked from Steve’s perspective below, and read on for the full interview!

Shannon: What is your job as Company Manager like, day-to-day?

Steve: It changes day-to-day. Depending how long we’re in a city. The next two days, we’re busy setting up the show as you can see behind me a little bit. We’ve set up the dragon and we’re getting ready for the show tomorrow night. Once we’re up and running it becomes more of an administrative job. Basically dealing with the 70 people on tour and travel accommodations, and trying to get things organized. When we come into Nashville we make sure to work with TPAC to make sure everybody has a smooth transition and if they need anything-doctors, dentists, gyms, Pilates studios, we have outlets to that here.

Shannon: What is the most challenging part of working for Wicked?

Steve: Wow, that’s a good question. The most challenging part about working for Wicked. I think the most challenging is just moving the show from city-to-city. Especially in the winter months when we’re in places like Chicago or Pittsburgh. You have to deal with the unexpected-snow storms and flight cancellations and stuff like that. Once we get into the warmer months its not nearly as difficult. Then you have challenges going into buildings and making sure the show fits. It’s the unexpected-if the show has to stop for any reasons-winter storms or hurricanes or floods. There’s always something that gets in our way.

Shannon: To go with that, what is your favorite part about working for Wicked?

Steve: I love the audience reaction to Wicked every night, I think that this show is timeless. I think that whether you’ve seen Wicked a thousand times or you’ve never seen, it you walk in and you see something different and something new. I think our producers and our casting people do a great job at casting the show. After 12 years, it’s one of the top tours out there, audiences love it. We come back to cities. How can you not love being in Nashville for four weeks? It’s really terrific.

He’s absolutely right, and he is one of the lucky ones to get to see those reactions after each show after taking care of it at every stop.

Check out some of the photos we got of the set up that Steve mentioned in our interview, including the rafters, various backdrops and of course-the dragon that pulls it all together. Many of the backdrops were already hanging from the rafters. Here you can see the gears of the Time Dragon Clock, as well as a view of just how high the rafters go. You can get a glimpse of how much space there is for plenty of flying set pieces. 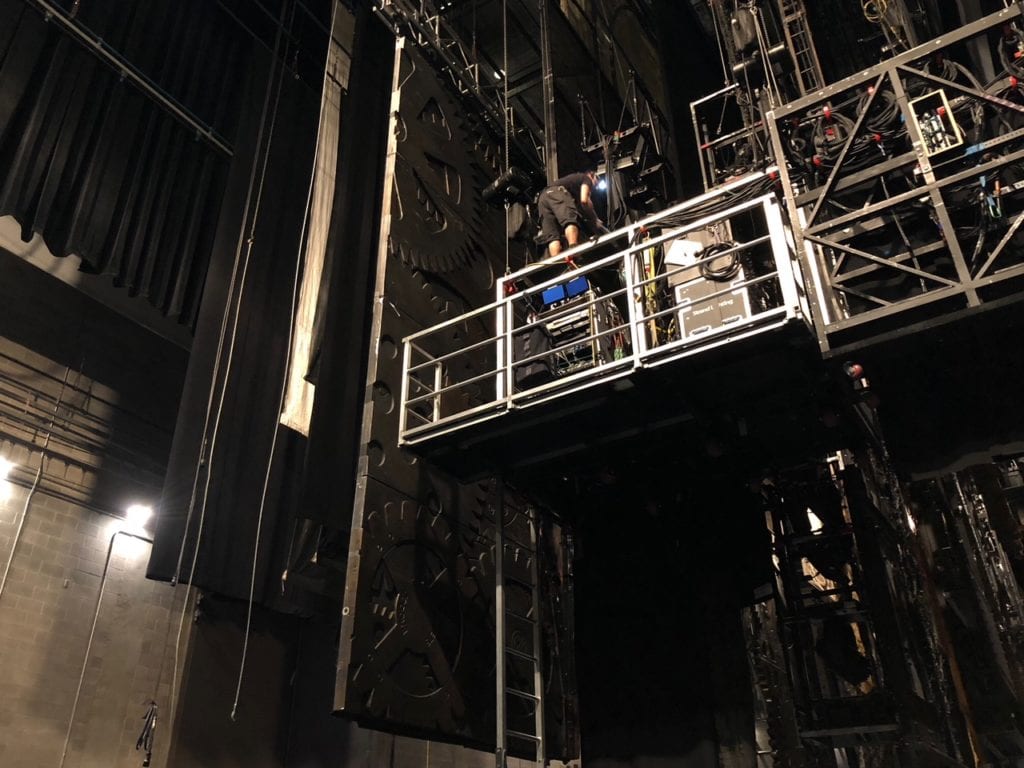 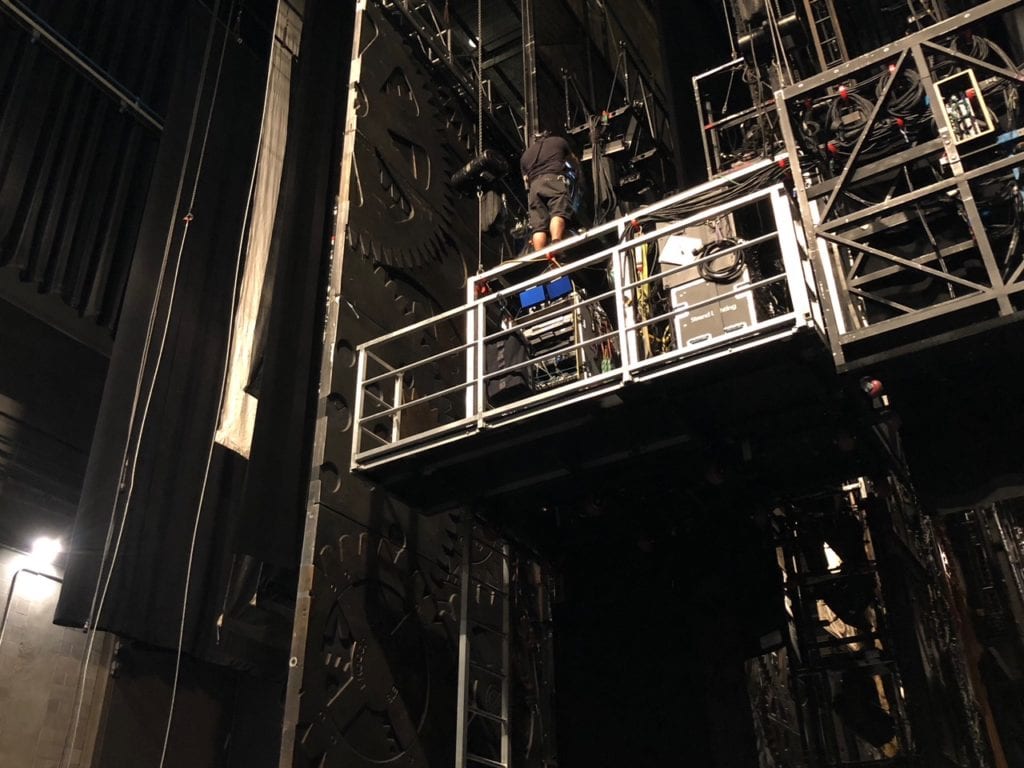 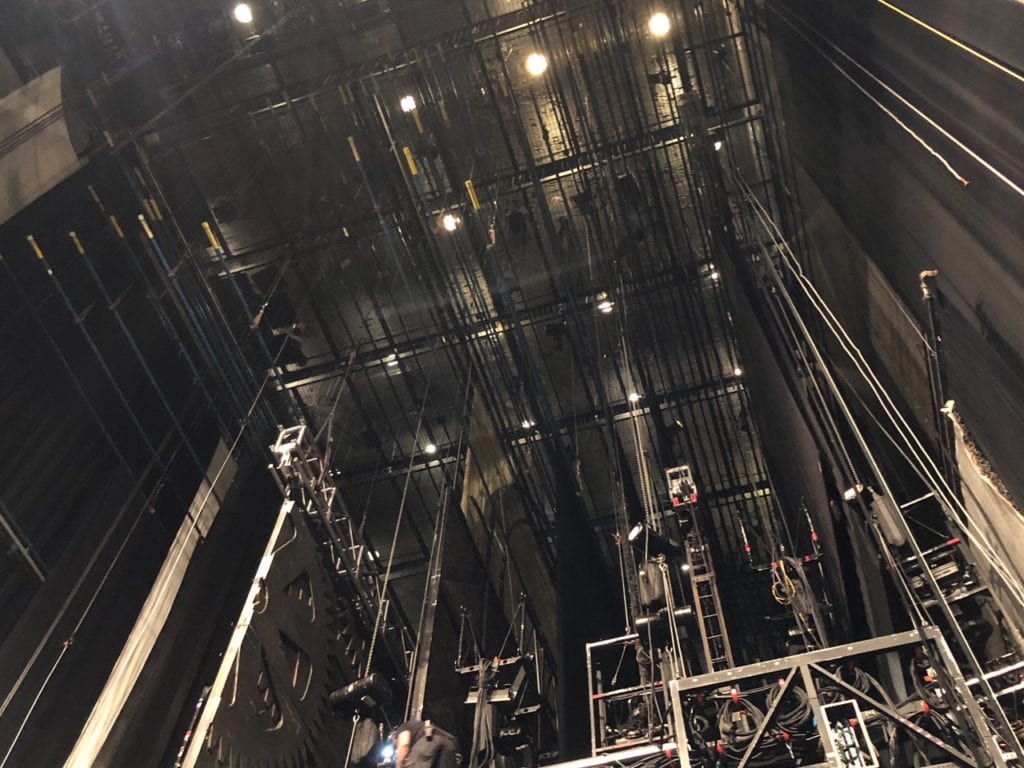 Somewhere up there, is Glinda’s bubble! 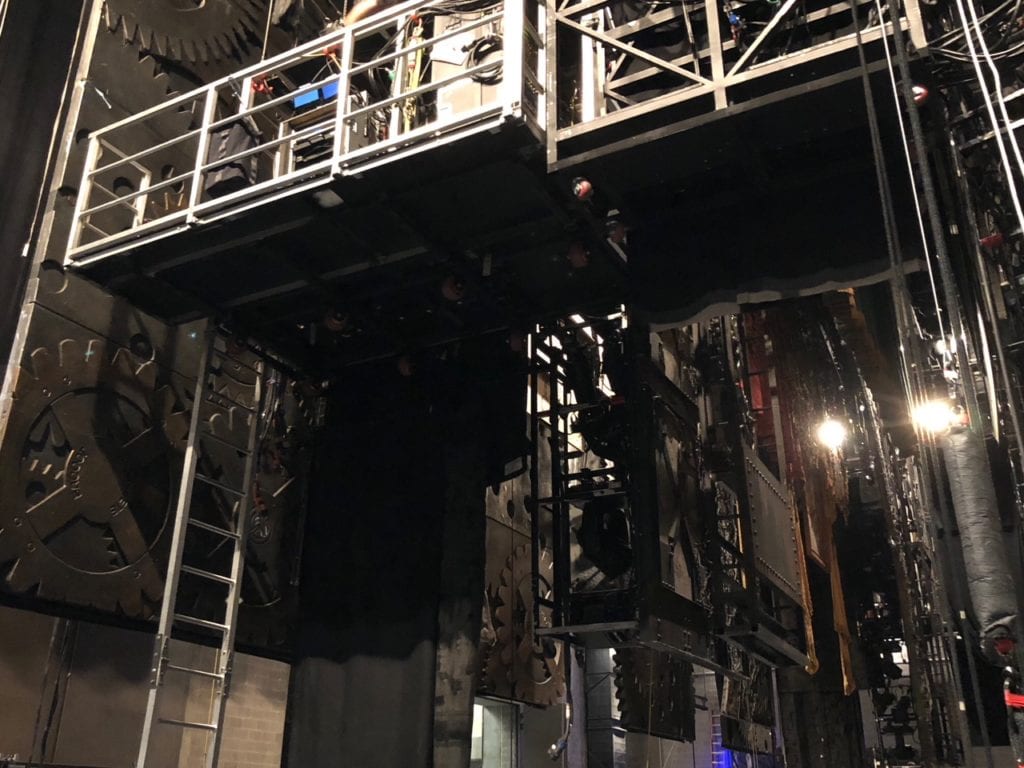 We got up close and personal with the entire backstage area, which will soon run like a well-oiled machine. It was full of labeled boxes being unloaded. From a Tool Box, to a Spare Monitor, it goes to show that what goes on behind the scenes is crucial for the magic to happen in front of the audience. 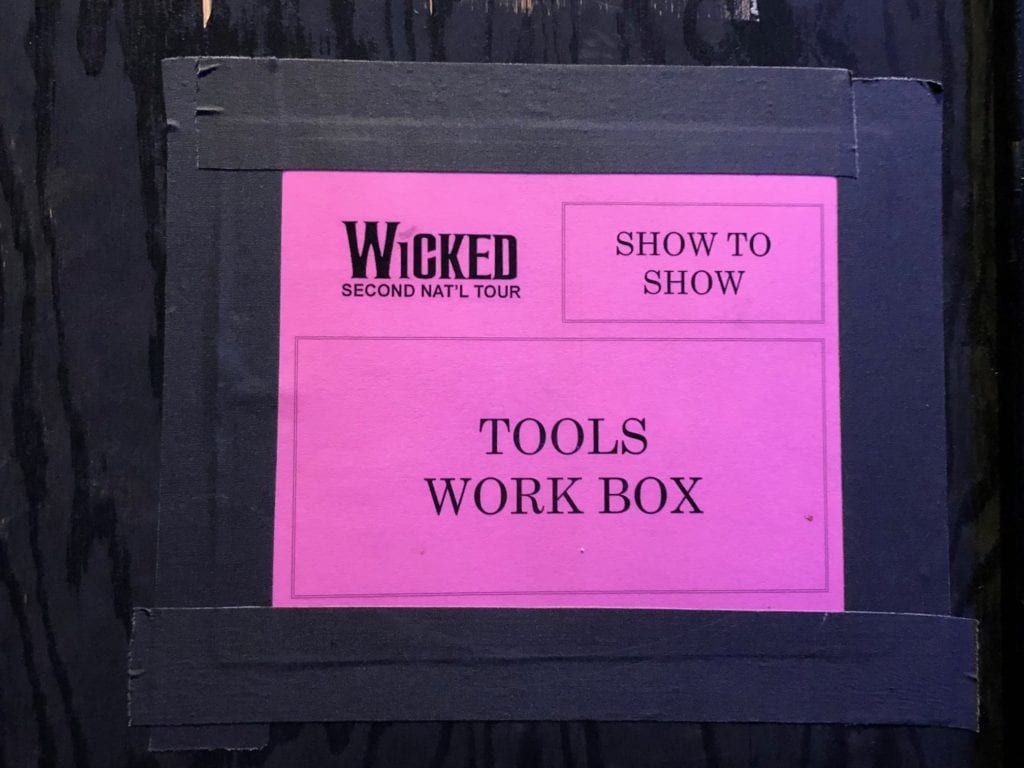 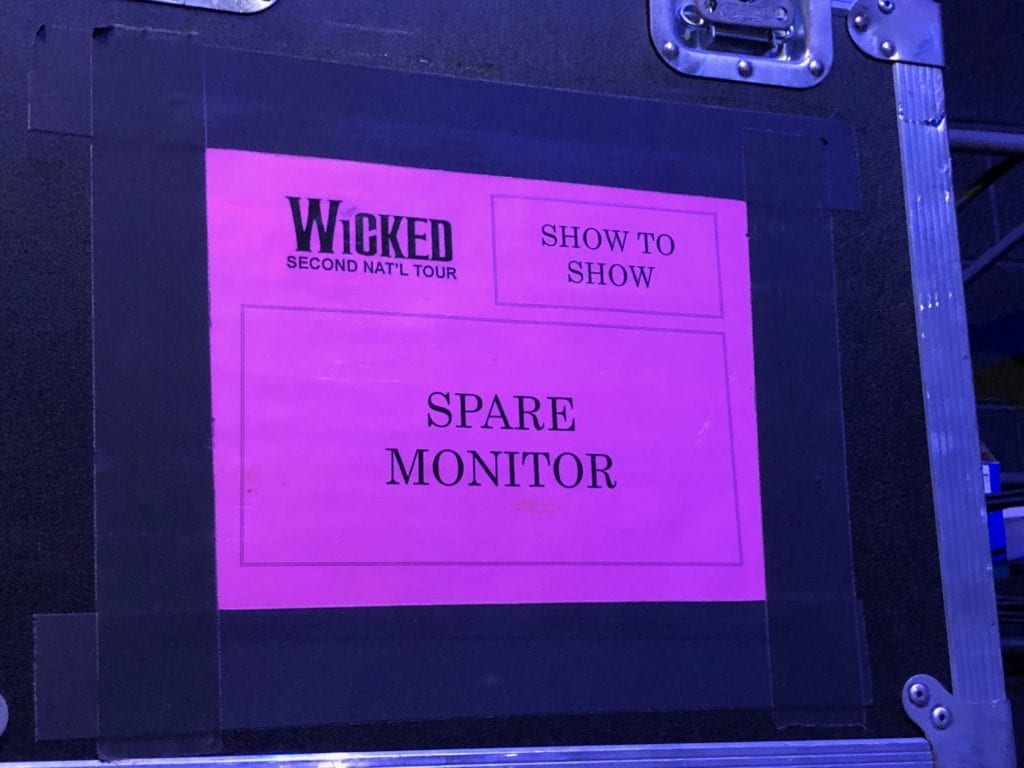 Although the costumes, and specific props were still on the trucks, one of the most amazing sights to see was a view of the stage from the earliest perspective of being built. The most important part of the stage was there, of course. The Time Dragon Clock. 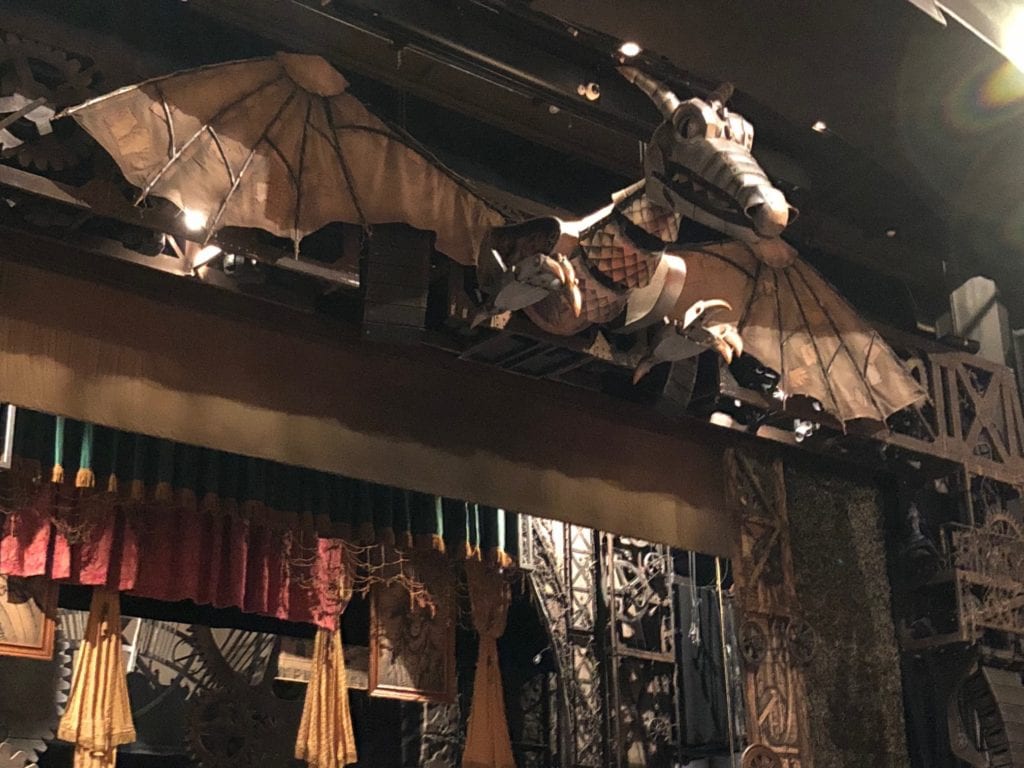 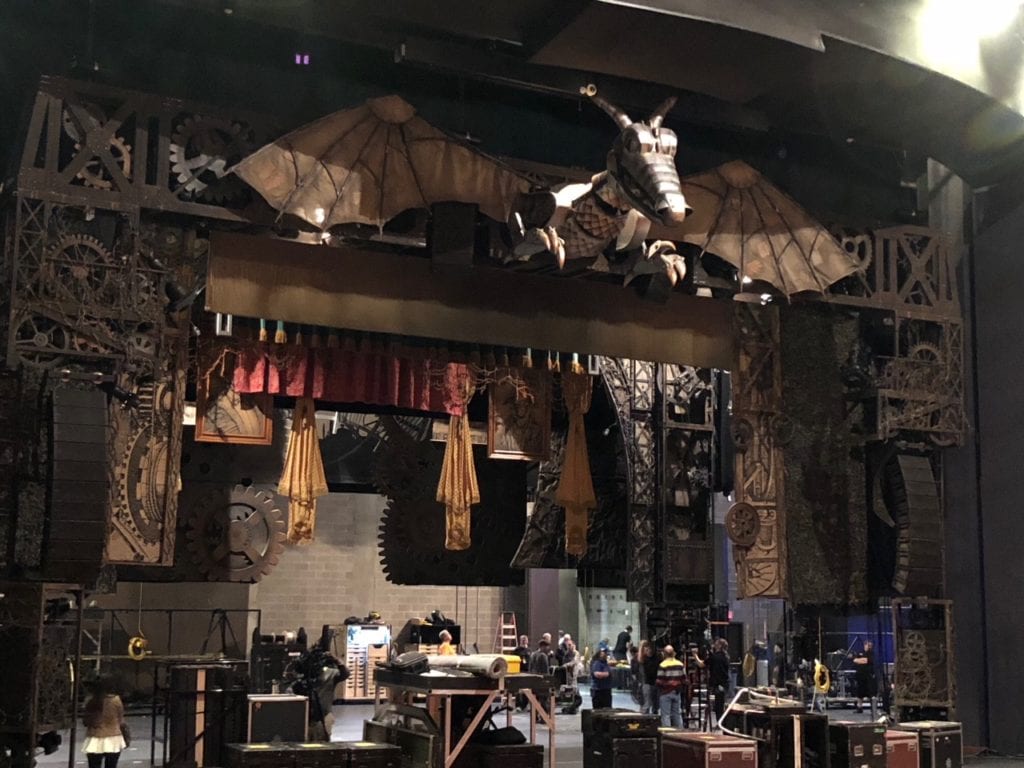 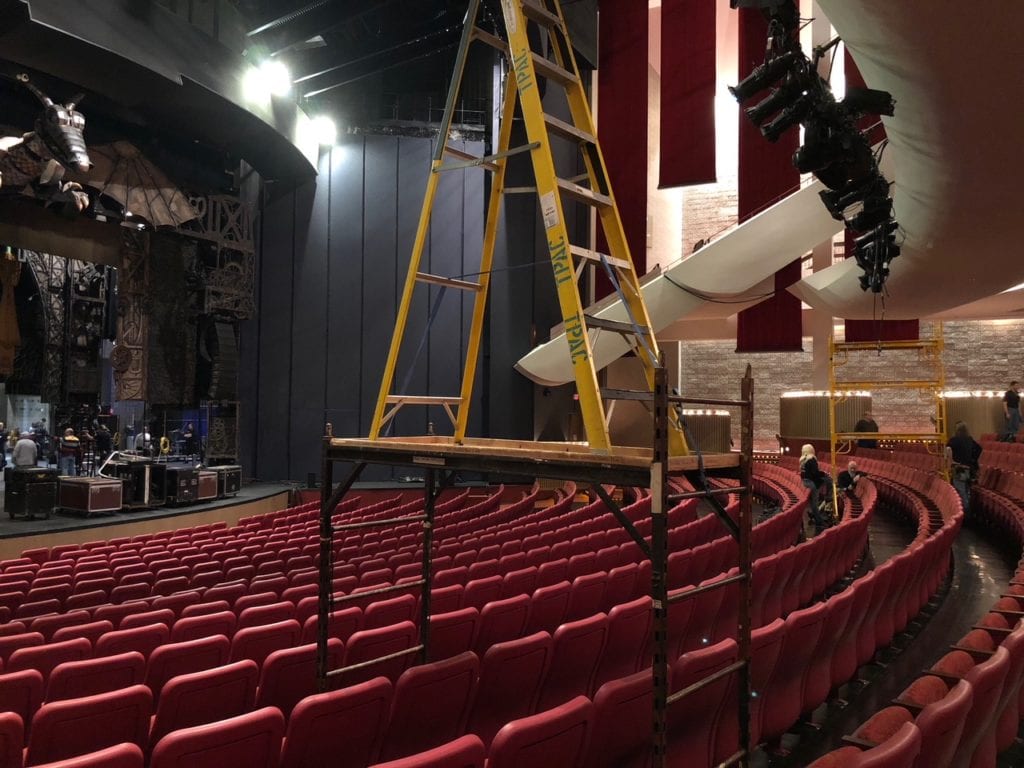 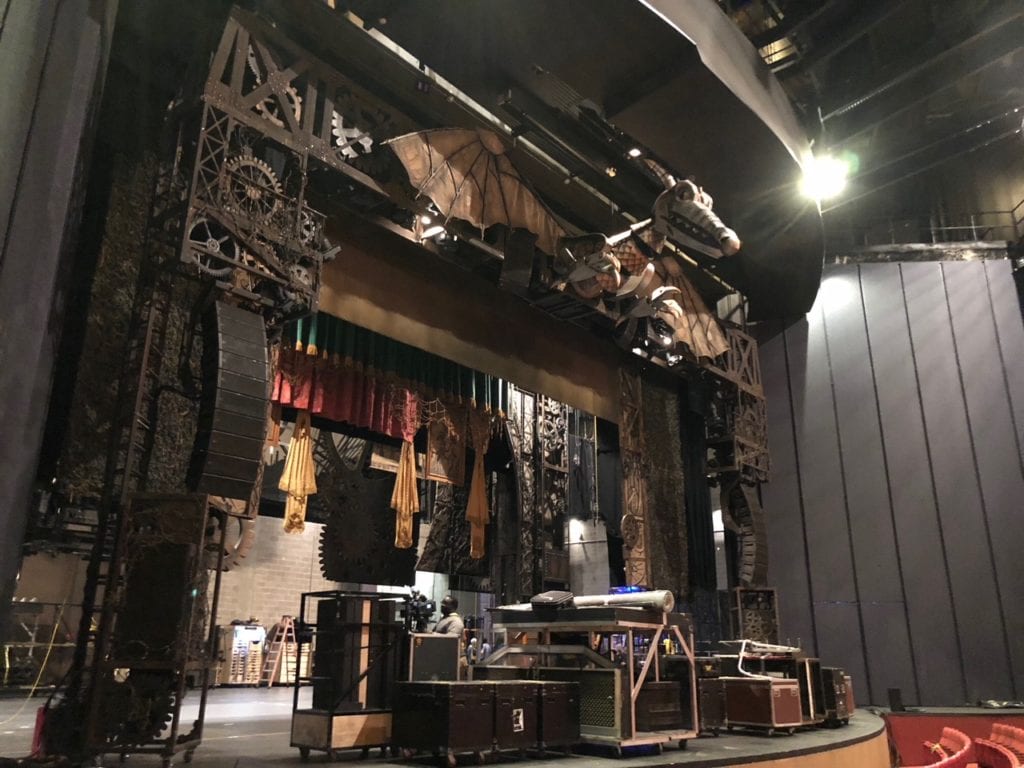 The visuals of the stage during a performance of Wicked is one of its many most magical aspects, it sort of takes my breath away every time I see it-even when it’s in the middle of coming to life.

We got one final look at the stage as we left. 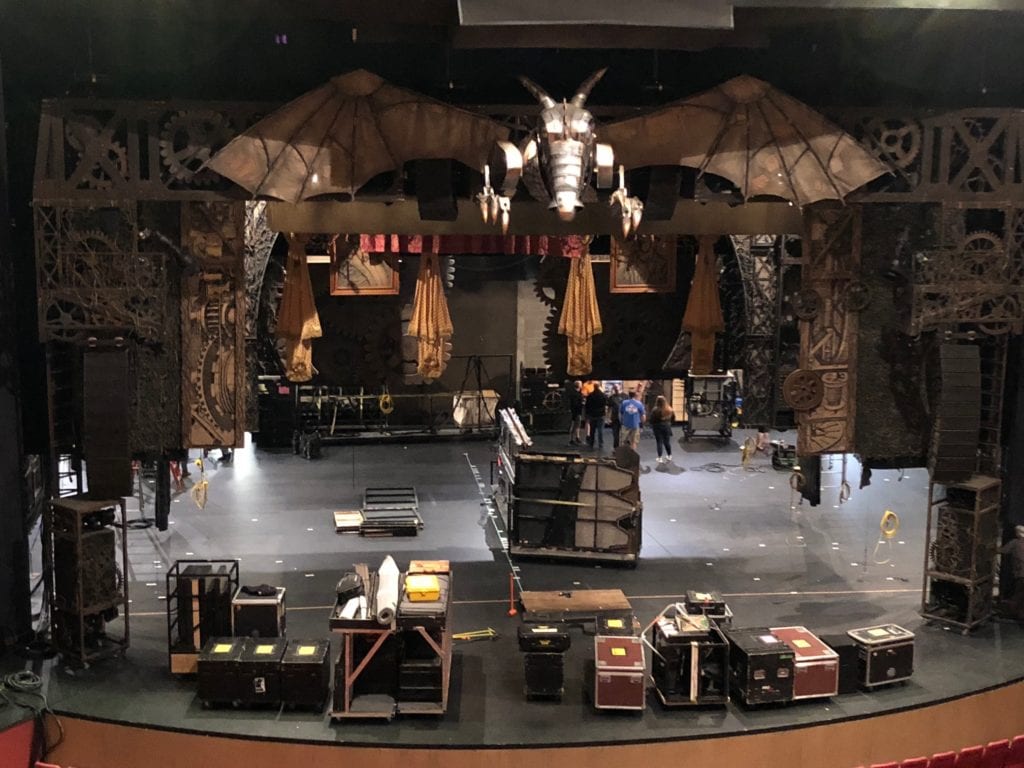 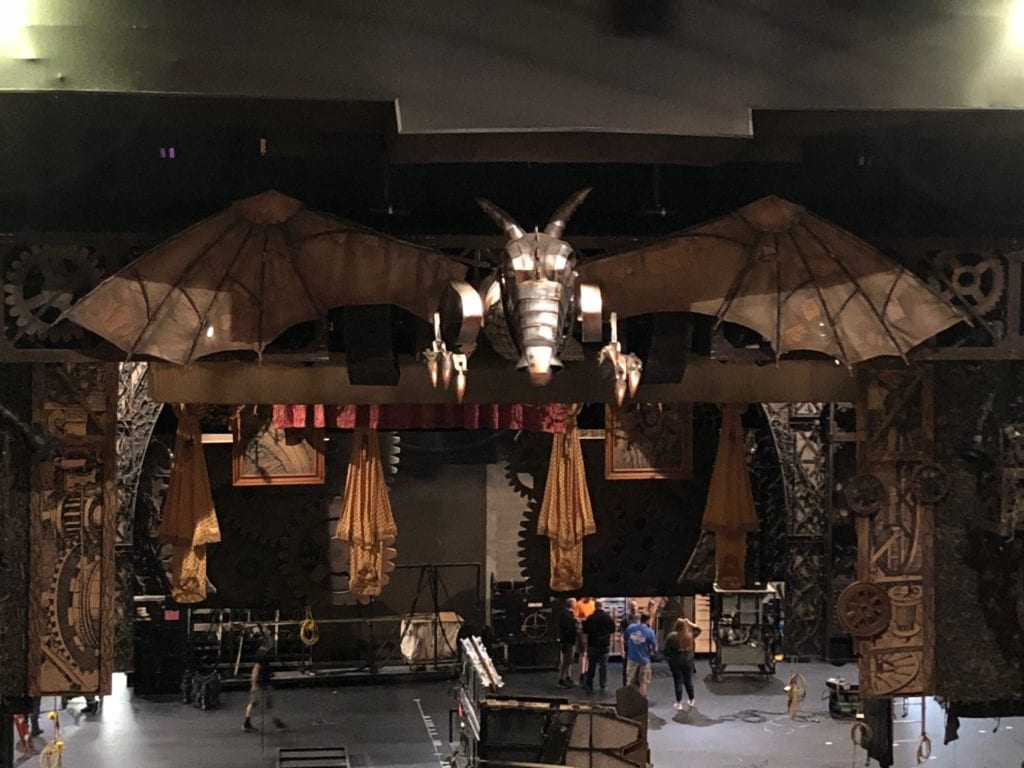 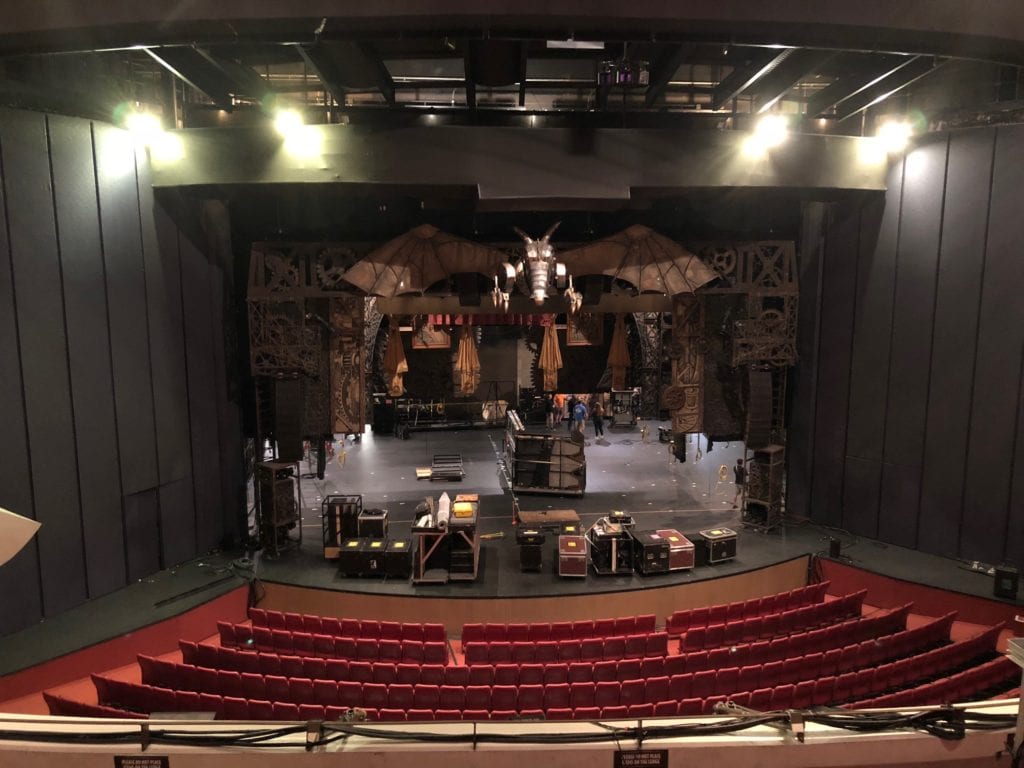 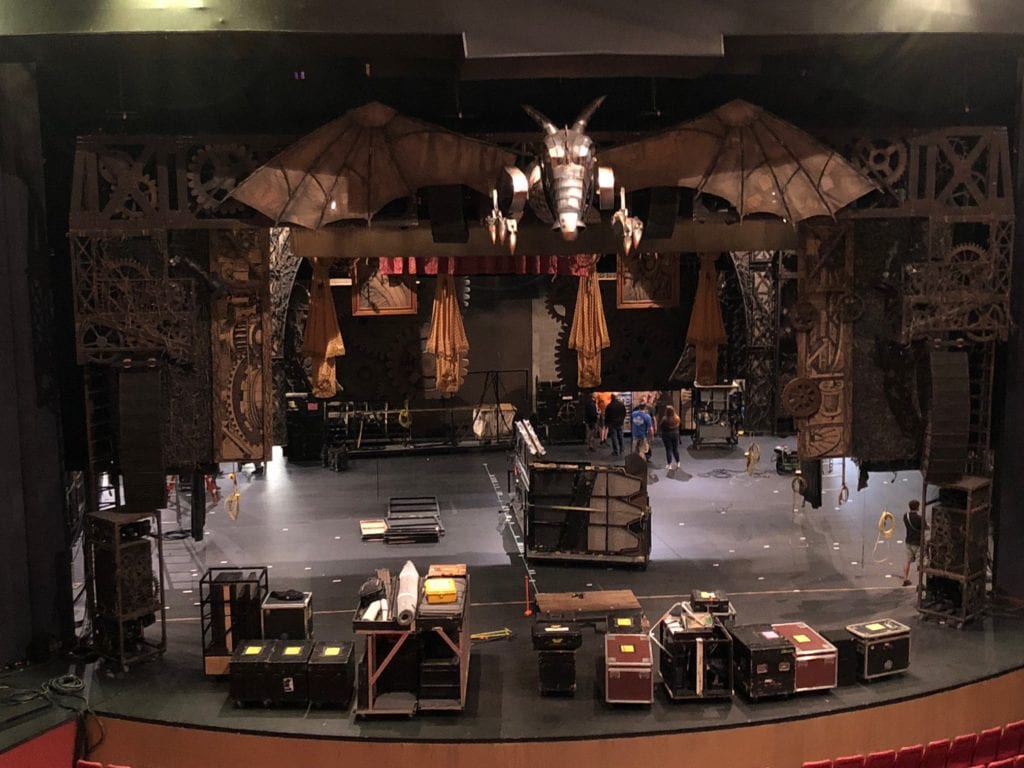 This look is awesome for any fan, but if you’re in Nashville, be sure to check out WICKED at The Tennessee Performing Arts Center. The show’s leading ladies, Mary Kate Morrissey and Ginna Claire Mason are sure to blow you away-and Ginna Claire was actually born and raised here in Brentwood Tennessee.

The show runs from March 28th until April 22nd. TPAC is running a lottery as well, where you can get $25 tickets. Click here for more information on that awesome deal.

If you’ve never seen WICKED before, you’re in for an experience. If you have seen it, I’m with you-I’ll be going to see it once again, and I’m just as excited as the first time!